Purchasing tiers isn’t the only way to unlock them in Dota 2 battle passes. After acquiring the battle pass, players will be presented with multiple ways to increase their battle pass level. From challenges to wagering on matches, there are quite a few ways to grind battle pass levels.

Cavern Crawl in Dota 2 can be categorized as a minigame that players can progress through by completing specific challenges, and defeating heroes. This mode is made up of various paths that branch out. There are three main pathways, Carry, Support, and Utility. To start progressing through a certain path, players will need to complete the prompted challenges in Normal, Ranked, or a Turbo match. Completing challenges in Turbo mode will reward half the credits.

Challenges will often start easy and require players to perform simple actions like placing wards or using various in-game items in a winning match, but they’ll become noticeably harder as the depths of Cavern Crawl unlock. There will be instances when a certain path will be blocked by a hero or require players to have a special item like the following to proceed.

The main rewards in Cavern Crawls are three exclusive skins that are at the end of each path: Carry, Support, and Utility. They aren’t the only rewards, however, since players will also get to unlock the following rewards during their Cavern Crawl adventures.

The points chests and Style Unlock Fragments are scattered around the Cavern Crawl map. In most cases, you should prioritize going for the reward when they appear on the map. There will also be times when they’ll be guarded with a time-consuming quest, though, forcing players to make a decision on which path they’d like to follow.

What are the Cavern Crawl reward sets in the 2022 Dota 2 battle pass? 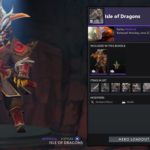