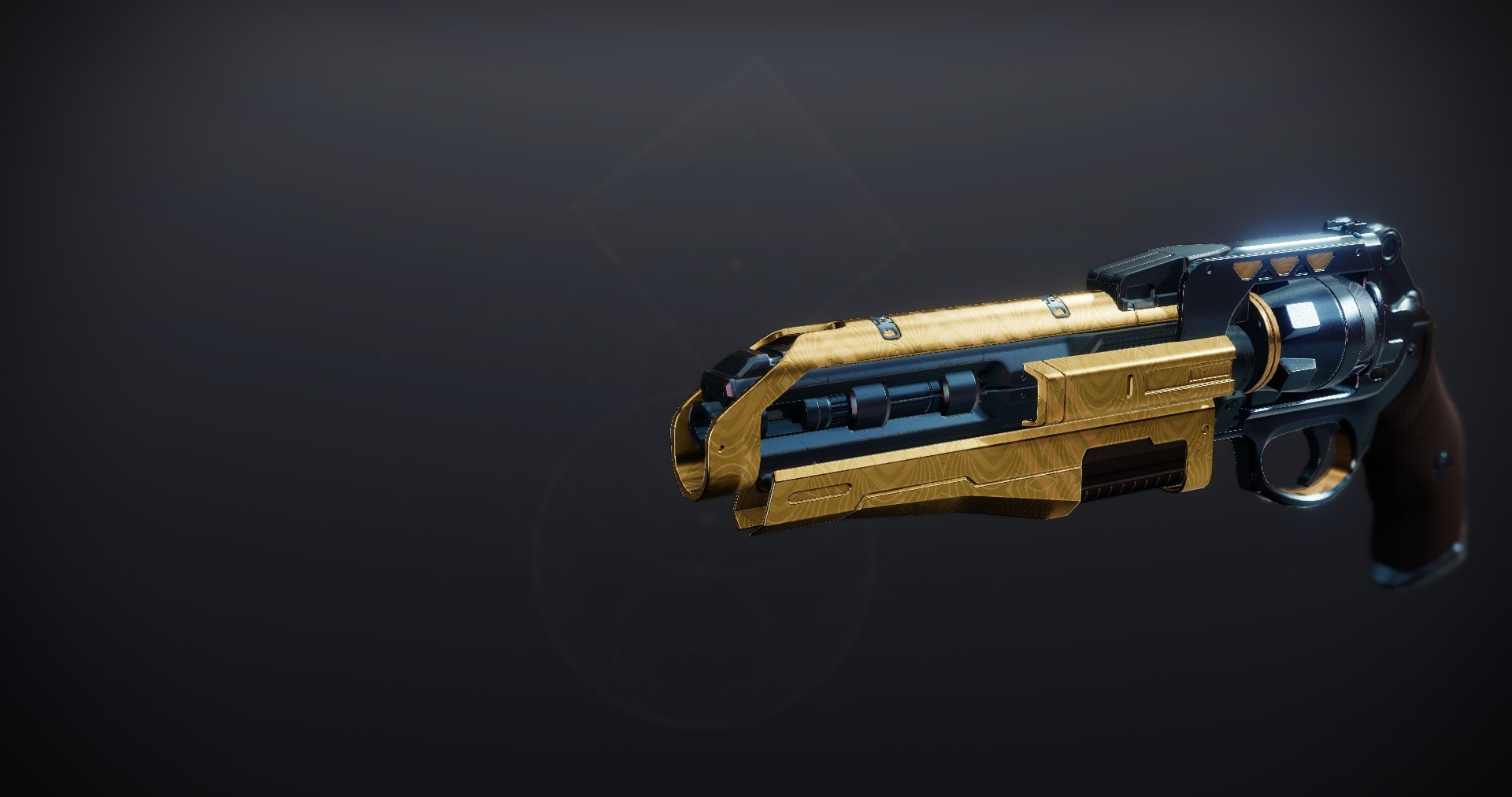 It’s nearly impossible to walk into a Crucible match in Destiny 2 where a player isn’t using a Hand Cannon. This weapon type is also a fairly common sight in PvE activities. These weapons are among the highest-damaging primaries in the game and it’s easy to see their appeal.

Hand Cannons are divided into archetypes based on their damage and fire rate (120, 140, and 180 rounds per minute as of Season of the Haunted, with Sunshot being the only remaining 150). The first two types reign supreme in PvP, but all of them can be viable in PvE content. Finding a Hand Cannon that fits a player’s taste (or certain elements, when Match Game is involved) is key. And luckily, Destiny 2 offers a wide selection of them.

Here are our recommendations.

If you spent any amount of time in the Crucible during Season of the Chosen, you likely ran into one (or a dozen) of these. Igneous Hammer is a hard-hitting weapon with a rich perk pool. The catch is it was locked behind Trials of Osiris, which made it extremely unfriendly toward a significant share of the population. It’s been removed from the loot pool, but players who got one can still keep theirs at hand.

The Vault of Glass Hand Cannon has an incredible selection of perks. A Firefly roll can make it a weaker Ace of Spades (with the upside of not taking up an Exotic slot), but it can also drop with Explosive Payload and the raid-exclusive Rewind Rounds, which refills the magazine based on hits. In addition, it’s a rare 140rpm that takes up the Kinetic slot, though that slot has gotten a fair bit of competition since its release.

Stasis weapons can be invaluable for Stasis-centric builds and the Grasp of Avarice dungeon added Eyasluna as the first Stasis 140rpm in Destiny 2. Sacrificing your Kinetic slot for this can easily be worth it thanks to its unique perk pool. Though Headstone steals the show since it functions as a Stasis version of Dragonfly with extra steps, Outlaw, Rapid Hit, and Perpetual Motion are on the menu and can be paired with Kill Clip or Demolitionist for a hefty, diverse perk pool on one of Destiny 2’s most beautiful hand cannons.

Season of the Haunted put Austringer back as part of the return of the Leviathan in its derelict and decrepit form. It can drop from Opulent Chests and players can use Umbral Engrams to focus copies of it after unlocking the related upgrades to the Crown of Sorrow. It’s also craftable, which can give players access to enhanced versions of base perks and allows them to fit their roll perfectly to their playstyle. Add to that some good stats and a perk pool that can come with Outlaw or Triple Tap paired with Rampage and Demolitionist, and Austringer can be worth your Kinetic slot. Destiny 2 has added a slew of Kinetic 140rpm hand cannons during the Beyond Light year, however, which give Austringer a good run for its money.

A returning Nightfall weapon, D.F.A. used to drop from the Tree of Probabilities Nightfall in Mercury, but can now drop from Nightfall completions when D.F.A. is the weapon of the week. It has access to a slew of good perks, including Outlaw, Perpetual Motion, and Triple Tap in column three and Vorpal Weapon, Rampage, Timed Payload, and even Wellspring in column four. Since it’s a Nightfall weapon, players can also get the Adept version of it by completing a Grandmaster when D.F.A. is on tap, opening up even more options to fine-tune the weapon by using Adept mods.

Avid Gambit players may already have a stock full of these. The Bottom Dollar is a 120rpm Hand Cannon that drops exclusively from Drifter’s game mode and packs a punch. Its perk pool is diverse, which can turn getting an ideal roll into a long game of patience. Still, it can come with perks such as Outlaw, Surplus, Rapid Hit, or Subsistence to keep reload times down, alongside damage rolls like Rampage, Multikill Clip, or Explosive Payload.

This Nightfall weapon was by far the most popular reward for that activity during most of Year Four—and for good reason. This void 140rpm Hand Cannon hits hard and can roll a series of good combinations, such as Outlaw and Overflow alongside One for All (and Rampage before Season of the Risen).

This Hand Cannon is far easier to obtain than the Last Wish-exclusive Nation of Beasts and will easily give it a run for its money. Waking Vigil drops from Dreaming City quests, bounties, and Engrams, which makes it an easily accessible Arc Hand Cannon for Match Game activities. It has a lower Range and Stability when compared to Nation of Beasts, but its perk pool makes up for the difference—though some of the rolls are tied to the Shattered Throne dungeon. If you’re willing to grind Last Wish, though, or at least get the secret chests from it, then you may find a Nation of Beasts you like.

Bungie added Annual Skate back as a world drop during Season of the Lost, which gave players an easy way to obtain this hand cannon. It can pair useful perks like Outlaw or Surplus with Timed Payload, Dragonfly, and Multikill Clip. It’s also one of the few Hand Cannons that can come with Triple Tap, making it a unique weapon for the sharpshooters in the galaxy.

Garden of Salvation’s Ancient Gospel is a nearly identical substitute, with a smaller perk pool (yet effective) and slightly more vertical recoil. It takes more work to obtain it, however, and Annual Skate stole its spot on the list.

Vulpecula made its way to Destiny 2 with Season of the Lost and its entrance made quite a stir. It’s a Stasis-element Kinetic that pairs new perks, such as Adagio and Headstone, with tried-and-true favorites like Outlaw. As a bonus, its perk pool is considerably small and still stacked to the brim, meaning most rolls will be good. With the release of The Witch Queen, though, Vulpecula is only obtainable if Xûr decides to sell it on weekends.

Before Bungie reissued the rest of the Moon weapons from Shadowkeep, players were basically locked into The Steady Hand or True Prophecy if they wanted a Kinetic 120rpm. And neither of them was particularly easy to obtain: The Steady Hand was a random drop for Iron Banner, which only happens for a limited time once a month, while True Prophecy was one of the most elusive guns in the world drop loot pool.

Players who own Shadowkeep now have a new option for the slot—and it packs a punch. The Lectern of Enchantment in Shadowkeep gives the chance to target-farm Loud Lullaby at the expense of Phantasmal Cores. Though the perk pool on this Hand Cannon isn’t the best, it can still drop with some good perks such as Tunnel Vision and Surplus in the first column or Frenzy, Kill Clip, and Wellspring in column two.

This Exotic puts the “Cannon” in Hand Cannon. Eriana’s Vow uses special ammo and feels much closer to a Sniper Rifle, with the damage and fire rate to match. It also has an intrinsic Anti-Barrier, which makes it a valuable addition to any Guardian’s arsenal. It’s a surefire way to pick off enemy targets and break barriers, which make it comfortable in high-level content where almost any hit can be lethal.

Hawkmoon has great damage potential for a Primary thanks to its intrinsic trait, Paracausal Shot. Landing precision shots increases damage on the final round in the magazine, which can burst down harder-hitting enemies like yellow or orange bars. It’s not a weapon you’ll use for Champion or Boss damage, but that’s what Special and Heavy ammo are for. In all other scenarios, however, Hawkmoon is a comfortable Hand Cannon.

The Ace is Fatebringer’s older, meaner, battle-hardened cousin that probably has a criminal record. Cayde’s gun is a solid choice for more than just nostalgia reasons: Firefly makes the targets explode after a precision kill, while Memento Mori increases the damage of your first few shots. It’s fairly easy to keep up this combination in PvE activities, which makes the Ace a complete beast.

The gun also shines in the Crucible thanks to its permanent radar. The Ace is at a bit of a disadvantage compared to the nearly-ubiquitous 120rpm Hand Cannons, but it’s still deadly in its own right with the extra benefit of having the radar on when aiming down sights.

The Last Word is the only 225rpm and the only fully automatic Hand Cannon in Destiny 2, making it one of the most unique weapons in the Sol System. It’s become more viable in PvE content after the all-around buff to Hand Cannons in Season of the Lost, but it really shines in the Crucible. The Last Word is more prominent on consoles, but mouse and keyboard players who know how to use it can still destroy enemy Guardians.