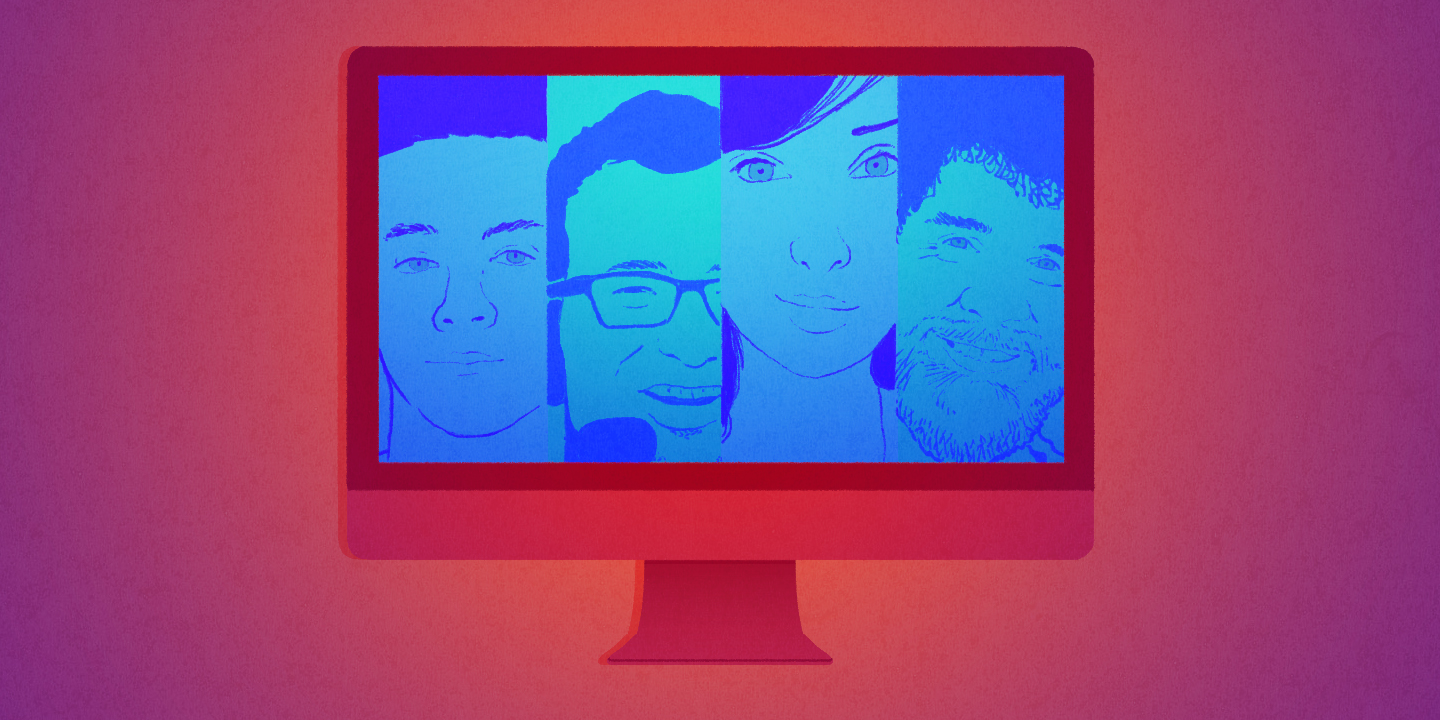 With 1.7 million unique broadcasters, it can be hard to know who’s worth watching on Twitch every month. But there are some streamers who managed to shoulder their way through the crowds of millions to the very top of Twitch.

This has been a big year for the streaming platform. Twitch gained an extra 200,000 unique broadcasters per month (up from 1.5 million in 2014). It was also the inaugural year for TwitchCon, an annual convention that brings streamers, viewers, and brands together for a few days of panels, competition, socializing—and, of course, streaming.

During the keynote for TwitchCon, Twitch revealed that there are around 550,000 people on the site concurrently, and approximately 15,000 channels live at any given time. The sheer number of streamers and viewers on the site this year only makes the accomplishments of the 12 people on this list even more impressive. Here are the most important people on Twitch in 2015.

Oh, Bob Ross. How you touched all of our hearts. To launch its new creative initiative, Twitch organized with what it called “the Bob Ross folks” to stream every episode of his show, The Joy of Painting.

A marathon 8.5 days and 403 episodes later (and uncountable KappaRoss emotes spammed in chat), and the Twitch community didn’t quite know what to do without his soothing tone and helpful painting advice.

Viewers were so enthralled by Ross that the hashtag #KEEPBOB inundated social media, trending on Twitter. Fans told stories about how Ross influenced their lives—everything from reminding them of their childhood to brightening up dark days. The impromptu campaign worked.

Twitch decided to bring Ross back every Monday for 6.5 hours (now easily the best day of the week), and also marathon The Joy of Painting every year starting on Ross’ birthday on Oct. 29. This year wouldn’t have been the same without you, Bob.

SolidJake | Heroes of the Storm

Heroes of the Storm was publicly released on June 2. But Jake “SolidJake” Kulinski was an instrumental member of the community long before that, helping to grow both the professional and casual scenes through his Twitch channel.

You would think that casting during the Road to Blizzcon and the world championships—alongside organizing grassroots tournaments—would be enough work. But somehow Kulinski still manages to find time for informative streams almost every day. He also co-hosts a Heroes podcast every Wednesday called Town Hall Heroes, with professional players from around the world brought on as guests.

The Heroes scene would not be what it is today without Kulinski. Plus, he does this.

Out of all the Hearthstone streamers this year, Andrey “Reynad” Yanyuk was one of the most informative, always talking through his thought process to help viewers learn more about the mechanics of playing the game. Aside from streaming, he also expanded his esports organization Tempo Storm, creating a lot of jobs in the industry.

Since founding Tempo Storm halfway through last year, Yanyuk has grown it from a base of Hearthstone players to include teams in World of Warcraft Arena, Heroes of the Storm and Overwatch. The organization also has players in FIFA and fighting games like Super Smash Bros. Melee.

Every big streamer has to deal with harassment and toxicity in their chat. Most tend to ignore it. But earlier this year, Yanyuk addressed it directly. He called his viewers out for it and said that he might quit streaming. Sure, he came back a few days later. But at least he took a stand for a little while.

The most-followed female broadcaster on Twitch, Sonja “OMGitsfirefoxx” Reid takes time to do pretty much everything you can on the platform—including, more recently, showcasing her awesome guitar skills on Twitch Creative.

Reid has a big personality that’s made her beloved by her followers and subscribers. If you’re ever feeling down, her stream is sure to cheer you up—just spend a few minutes watching her draw a mustache on her face with lipstick.

She also plays a variety of games, everything from Minecraft to H1Z1, The Sims, and Nintendo 64 classics. Growing a solid, loyal following with that type of eclectic content isn’t easy. But this year, Reid juggled all of her viewers interests with relative ease.

For an insider’s look at a professional Smash player’s success, look no further than Zac “SFAT” Cordoni. One of the best Fox players in North America, Cordoni started streaming an informative mix of analysis and practice earlier this year, giving a unique insight into the game and the techniques that players should be looking out for and practicing. He tries to stream four days a week and does a mix of match analysis for both himself and his subscribers’ games, as well as technical skill practice and play.

Cordoni signed with Counter Logic Gaming on Dec. 15—a move that has the whole Smash community talking. He is only the second Smash Bros. Melee player to be picked up by the organization; the first was his childhood friend and Melee doubles partner Kevin “PewpewU” Toy—so you can probably expect some doubles analysis on his stream in 2016.

Jorien “Sheever” van der Heijden is easily one of the most popular and hardworking Dota 2 streamers of 2015.

She’s a constant presence on the platform, where she provides thorough analysis of in-game situations. Van der Heijden has a solid background of knowledge on the game—she’s been playing it since beta. She also casts, interviews, and hosts in English at Dota 2 events and tournaments.

Street Fighter 5—the first new game in the series since 2008—doesn’t come out until early next year. But it has been in beta for a few months now. And luckily for Street Fighter fans, one of the game’s star players has been streaming it.

Infiltration streams the Street Fighter 5 beta regularly (in between practicing for the Capcom Cup) giving the type of insight you’d expect from a pro—even if it is usually in Korean.

There is nothing better than an educational stream with a big dose of entertainment, and James “PhantomL0rd” Varga was one of the best in 2015.

When you watch Varga, you often don’t even notice that you’re learning a great deal about whatever game he’s playing—his commentary is that good. Fair warning though: He’s got a sailor’s mouth. Just make sure your mom isn’t in the room when his stream is playing.

While Varga is known for mainly playing League of Legends at a high rank, he also occasionally likes to stream other games—most recently a whole lot of Counter-Strike:Global Offensive.

Olof “Olofmeister” Kajbjer is one of the best Counter-Strike players in the world. But despite his very busy schedule as a professional player for Fnatic, he also started streaming on Twitch earlier this year.

His skills are a huge reason people watch him stream, and he tries to be as informative as possible—either through explaining his rationale for certain moves, or having comms on while he plays.

While watching Kajbjer play is entertaining, there’s no doubt fans are really draw to his stream because they can get to know one of the game’s best players in a more casual setting.

This year, Tom “Syndicate” Cassell hit over 2 million followers on his Twitch channel, making him the most-followed male broadcaster on the platform.

In 2014 Cassell became the first streamer to reach 1 million followers, and the fact that he has gained another million in a year should come as no surprise to anyone that has watched his channel.

Cassell mostly streams shooter games, both CS:GO and Call of Duty: Black Ops 3, and his constant lively in-game commentary keeps viewers engaged—even when he streams for 18 hours (or more) straight.

Polchow is a well-known and decorated player in Call of Duty, he was part of the compLexity/Evil Geniuses era, ultimately winning a total 18 professional events.

While a number of professional players have already made this list for their exceptionally educational streams, Polchow is one of the best of the best. He provides so much context and insight into the game and his thought process when he’s playing that he’s able to lock away his past stream videos behind a subscriber paywall.

We’ve left one of the best for last, Alexandrea “2MGoverCsquared” (2MG over C squared, or Gover for short) Montehermoso was probably the nicest streamer on Twitch this year. Yes, really.

Montehermoso studied psychology in college, but quit a few years ago when she realized she could help people through streaming. She now regularly gives her followers and subs advice as she tries to help them with their problems.

She also openly discusses her own life—her father passed away when she was 13, and she was forced to live out of her car for a while when she was 19. Those experiences humbled her, making her one of the most down-to-earth and genuine people on Twitch. And the nicest.