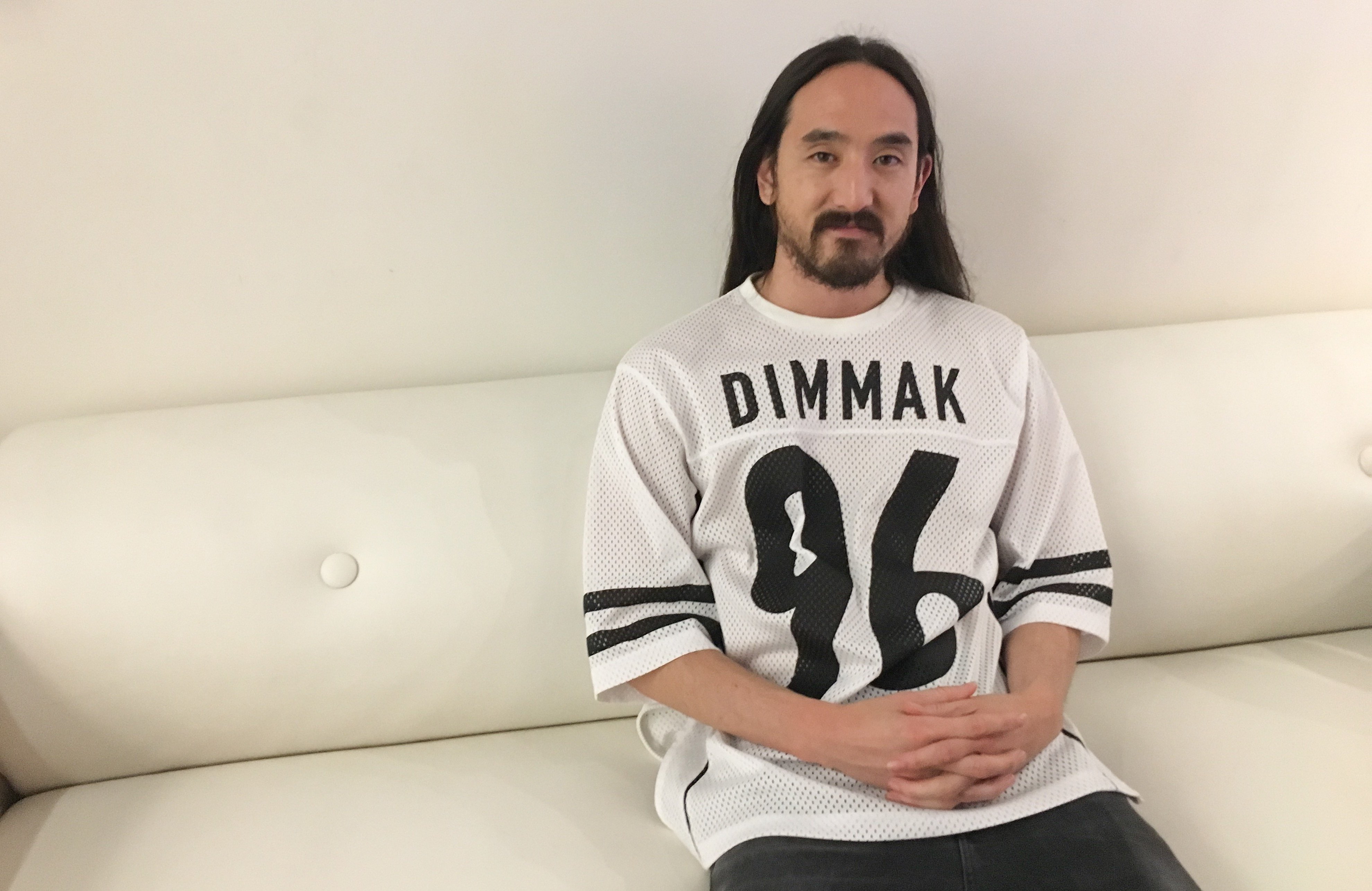 The bass is so loud you can feel it vibrate through the floor and walls, even on the third floor of the warren-like backstage of San Diego’s Petco Park stadium. Outside, rapper T-Pain (of “Buy U a drank” and “Bartender” fame) is closing out his set at the TwitchCon 2016 afterparty.

In a white room with a glass wall and balcony that overlooks the stadium and its thousands of attendees, sitting on a white couch looking very relaxed, is Steve Aoki. He’s due to start his set as the headliner at any moment.

Aoki has been in the music world for over two decades. His electro house tracks and numerous collaborations (with artists such as Afrojack and Iggy Azalea) are so popular, they’ve landed him multiple residencies in music capitals around the world, including Ibiza, Spain, and Las Vegas. In 2013, his album Wonderland was nominated for a Grammy Award for Best Dance/Electronica Album. It was fitting, then, that Aoki’s first Twitch stream—and the first-ever music stream on Twitch—was a two-hour live broadcast of one of his residency sets, named Aoki’s Playhouse, at Pacha nightclub in Ibiza in July 2014. It had over 250,000 unique viewers, peaking at 27,000 concurrent viewers.

“There has been a long symbiotic relationship between video games and recorded music,” Aoki said at the time. “With the gaming industry now doing live broadcasts on Twitch, it makes sense to bridge these two cultures with live music.”

He has continued to do that, streaming both his gameplay and live sets on his Twitch channel. During his set at the TwitchCon afterparty, Aoki also announced a new gaming venture: He’d invested in Las Vegas-based esports organization Rogue, which stables teams in Overwatch, Counter-Strike: Global Offensive, Call of Duty, Vainglory, and H1Z1.

“I’ve been keeping my eyes on the whole esports world,” Aoki told Dot Esports at TwitchCon. “I’m definitely an enthusiast… It’s exciting to go to like PAX and go to these kinds of things and just see how insanely huge it is.”

Just last month, Aoki streamed on Twitch with the Rogue Call of Duty team, playing games with them and giving the winner of various challenges gifts, such as limited-edition gear and records from his music label Dim Mak.

His investment in Rogue wasn’t Aoki’s first brush with esports, either. A few months before the announcement he invited a few Team Liquid players to Dim Mak for a few games of Overwatch.

“That was a lot of fun,” he told Dot Esports. “I got to really understand—I didn’t know this whole donation thing, people donated five dollars and you have to call them out, like ‘Yo, gamer545, thanks for the five dollar donation, I appreciate the money.’ So I started understanding the lingo.”

Aoki has been a gamer for most of his life, starting when he was “really young” and continuing through college and beyond, up until around 2007 or 2008 (he wasn’t quite sure which) when he gave it up to produce music full time.

“I was just in production mode for close to 10 years. I would play here and there but then last year I got back into it,” he said. The reason? He had vocal chord surgery and was put on vocal rest for a month, including a week where he wasn’t allowed to utter any noise. So he decided to play games, usually on his PS4, every night in order to avoid people and the potential to injure himself.

While gaming comes to him quite naturally (although he would probably disagree, “the whole point of having a Twitch is to create an audience that’s interested in watching me play so poorly,” he said), Aoki finds streaming on Twitch more of a challenge. He says it’s a learning curve, and the more he does it the more he understands.

“I need to see a physical crowd in front of me to build my energy level,” he said. “[On Twitch] it’s different, it’s almost like making a speech versus having a Q&A. When I’m on stage it’s a Q&A, because I have someone to talk to and I feel like the questions I’m being asked, I can answer. With Twitch it’s like you have to just kind of go off the cuff and spill the beans on whatever you want to say at any given time. Of course I’m looking at the messages, they’re asking questions, but it’s just a different vibe for me than playing on stage, so it takes a little bit of getting used to.”

Rather than doing straight gameplay by himself, Aoki prefers to do event-based streams like charity matches with other people in the music industry—like his Street Fighter battle with hip hop artist Kid Ink, which Aoki lost, resulting in him having to give $10,000 to charity.

Aoki said he puts a lot of thought into these collaborative streams, trying to fit the game to the person he’s battling—if they’re a “gun guy” he says they might be down for Call of Duty, or if they grew up playing Mortal Kombat or Street Fighter they would probably prefer that. He’s also always trying to get more people involved in the gaming and Twitch world.

“Instead of just flicking a switch and going, ‘Alright, I’m going to play,’ I’d rather make it collaborative,” he explained. “Find another artist and kind of suck them into this world too. I love introducing this world to other people that just have no idea… It would be cool to do one with Skrillex, or Diplo, or Martin Garrix. The younger they are the more likely they’re probably a gamer.”