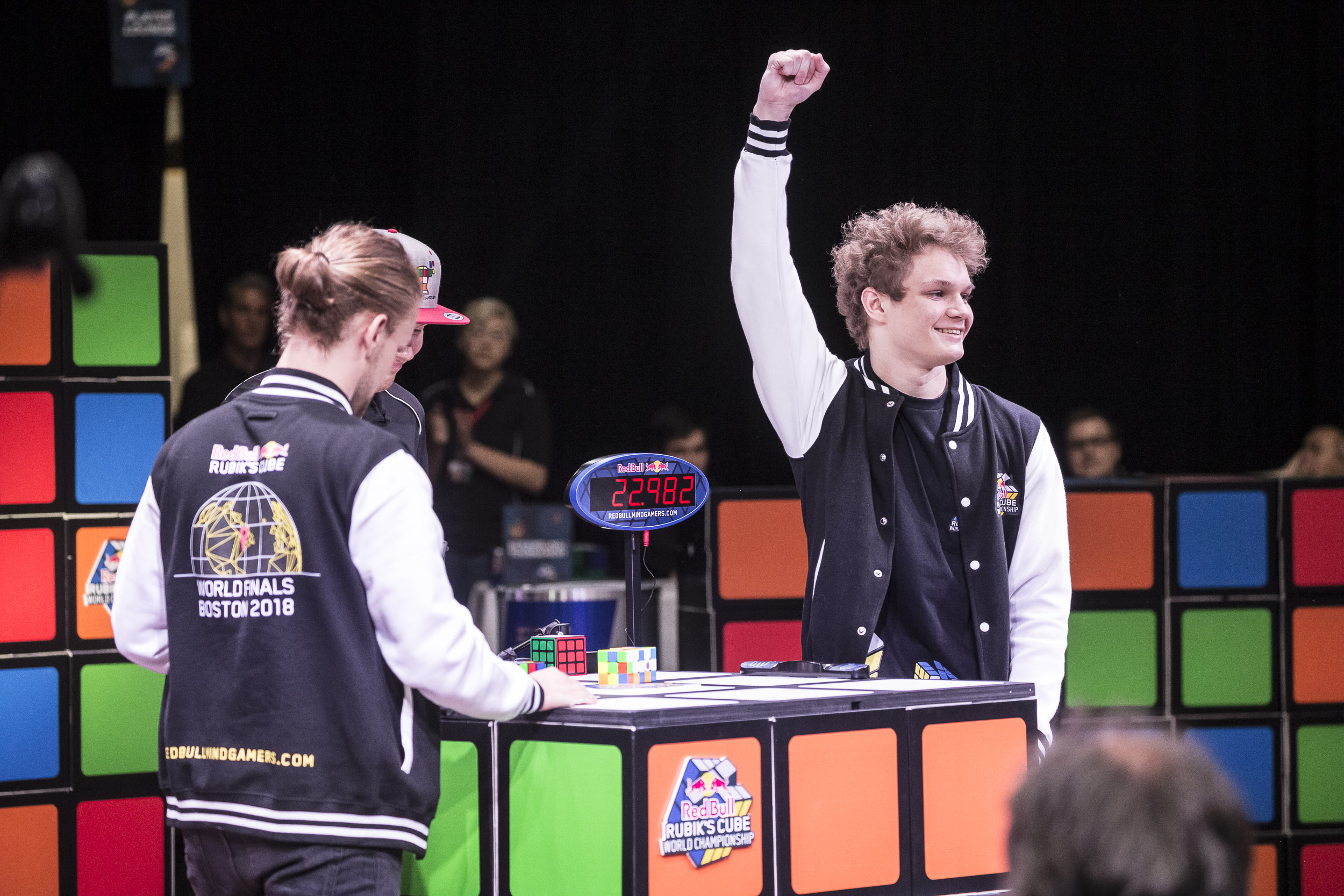 It’s quiet in Boston’s Cyclorama Building, a historic space originally built in the 1800s to house a massive, 360-degree painting of the Battle of Gettysburg. At the Red Bull Rubik’s Cube World Championship over the weekend, a quiet cluster of fans sits in the center of the cylindrical building—many clutching their own cubes—while the speediest solvers go head-to-head in an unprecedented tournament format.

Cubing is, typically, a solo event where the only opponent is the clock. There’s little fanfare. It’s not a spectator sport, with no big screens or flashing lights. When Patrick Ponce broke the speed cubing record in 2017, no one noticed until he mentioned it to the room. It was a similar affair when Feliks Zemdegs broke the record with a 4.59 second solve in January this year. (He later beat that time again in May with a 4.22 record.) Tournament play continues on as usual, the sound of plastic snapping together acting as white noise, when Zemdegs appears to mouth to his neighbor: Is that the world record? Red Bull’s event is different. On Saturday afternoon at Cyclorama, Zemdegs, armed with his world record, faces not only a clock, but an actual opponent.

Red Bull’s Rubik’s Cube World Championship bucked decades worth of tradition in solo cubing, enforced by the World Cube Association, which has been overseeing speed cubing since 2004. The World Championship space isn’t necessarily small, with three sections of folding chairs facing a decked-out stage, but feels so given the spacious, circular room. A cube podium is flanked by cube beams, a flashing scoreboard hanging behind. Most of the chairs are filled, and nearly everyone is fiddling with a cube of their own. Some attendees, many of whom appear to have been participants knocked out earlier in the tournament, spin layers in one hand and scroll through Twitter with the other. Everyone knows the rules too: Keep quiet. We cheer, politely, as the players stroll in through a cube arch, but are silent once they’ve reached the podium. The crowd hisses in awe at particularly speedy hands or close calls.

“This is something brand new,” Zemdegs told me after the event. “Going head-to-head is a different format. You’re still trying to do the fastest time possible, but there are a few other things that come into play.”

Solving the cube is important, of course—but if you can keep track of your opponent, you can take fewer risks. That means looking up during your solve, while you’re both facing each other at the cube-shaped podium, to see where your opponent is at. It’s a move I noticed players consistently using during the tournament. To an amateur eye, it felt insecure. Wouldn’t it just be faster to just focus on your cube? The key is being able to recognize what step your opponent is on, Canadian cuber Bill Wang told me. From there, decisions need to be made.

“If they’re ahead of you, you just need to try and sprint to the finish,” Zemdegs added. “If they were behind you, you can be a bit more safe with the execution and the moves that you do to make sure you really get the win rather than mess up.”

But despite the Red Bull tournament’s glossy finish, it’s not widely-accepted in the cubing world as a good thing. Both elite and amateur cubers are skeptical of a new format. The tournament series was not created in collaboration with the speed cubing governing body, the World Cubing Association, but instead with the Rubik’s Cube brand—which has fallen out of graces with the community due to a complicated intellectual property dispute with a popular speed cube brand, The Cubicle. Rubik’s Brand filed a copyright infringement lawsuit against The Cubicle over its speed cubes in 2017. A settlement has since been reached, and the brand’s lent its support to Red Bull.

“To this, Red Bull has ensured everybody that its goals are to diversify competitive opportunities in speed cubing and attract more attention to our sport—not to destroy, distract, or replace,” a Cubicle representative said in a statement. “As signs of good faith, Red Bull is currently in good communication with the WCA to plan collaborations in the future and chose to rebrand their event to the Red Bull Rubik’s Cube World Cup starting 2019.”

Red Bull also decided to relax a rule for the finals event that required participants to use Rubik’s Brand cubes, which aren’t popular with the community-at-large. A spectator at the Cyclorama event reiterated this to me after we bumped into each other at a big-brand bookstore blocks away from the tournament. Naturally, I was inspired by the event to pick up my first-ever Rubik’s Cube and start learning. As I reached for the Rubik’s Brand cube—something I assumed was the best option—she steered me down to a rounded-edge cube called V-Cube. Still not great, but the better of the two options. “Rubik’s Cubes are terrible quality,” she said before leaving for the check-out, her own puzzle—not a Rubik’s Cube—in-hand. “I have so many of those at home,” she added.

Red Bull’s decision to ease off its cube rules earned the company a bit more favor from the community.

“Seeing speedcubers succeed in new ways and on new frontiers gives us tremendous happiness, a sense we have shared with the community even before the inception of our company,” a Cubicle representative said. “In this light, Red Bull’s aspirations to grow and enliven our sport are exciting and are very much aligned with our own. Because of this and their commitment to cooperating with the WCA, we have decided to collaborate with them to explore new opportunities for fun, engagement, and growth. We hope that speedcubers can give them a chance to demonstrate that they are genuinely interested in contributing to our sport.”

Though Red Bull hasn’t won over all of its naysayers, it was enough to bring out cubing’s best-of-the-best, including women’s track champion Dana Yi. Yi and a number of other women competing in the Red Bull tournament were placed in a first-of-its-kind track specifically for female competitors. (The WCA doesn’t separate women and men.) Ultimately, women and men have no physical advantages or disadvantages when it comes to cubing. But there are considerably fewer women competing, which could dissuade women from trying it out. It’s a male-dominated activity, and that could give an appearance of a space that’s not for women.

But, of course, that’s not the case. Cubing is for women, too.

“I think [the tournament] is really awesome and it should motivate more women to compete,” Yi told me. “[The women’s community] is definitely smaller than the male community.”

Yi added that statistics put female competitors at 11 percent of the community. “It’s definitely smaller than what I would like to see, but I think eventually these [type of events] will definitely help other females get into [speed cubing.]”

The overall structure is an attempt to bring cubing to the masses and to make it more like a sport or an esport, to add drama and intrigue. And in a lot of ways, it did. Speed cubing is all about tension—the tension of your cube, between competitors, in the guts of fans cheering for their favorites. A lot was at stake at the Red Bull World Championship. A $30,000 prize pool split between winners isn’t enough to change the lives of elite cubers, but it’s a nice bonus. (Zemdegs said it’s not possible to live off cubing alone, not yet at least.) The top four winners in each category (fastest hand, re-scramble, speed cubing female, and speed cubing mixed) took home $25,000 Super Bowl-style championship rings created by Diamond Cutters International. That’s diamonds, rubies, sapphires, and emeralds embedded in gold and silver rings.

It’s more flash and glamour than the Rubik’s Cube has seen in its lifetime, except for Diamond Cutters International CEO Fred Cueller’s $2.5 million gemstone encrusted Rubik’s Cube, which was created and presented to Rubik’s Cube inventor Erno Rubik in 1995. The Red Bull Rubik’s Cube World Championship is trying to change the face of cubing, but it’ll only work if the community truly accepts an extravagant facade.