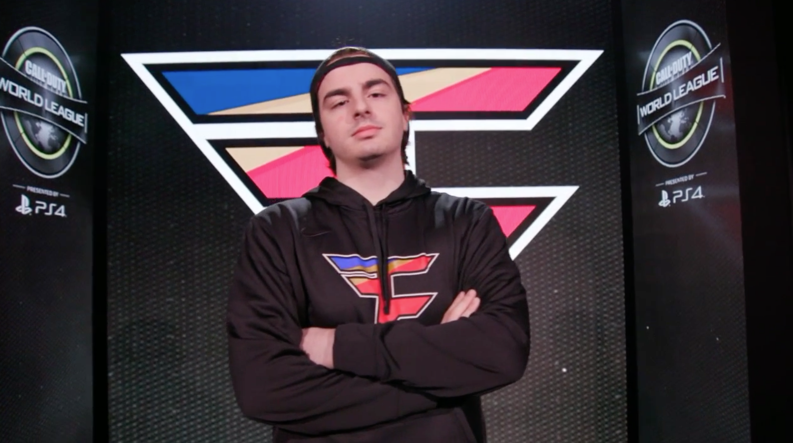 Although the first week of Stage Two in the Call of Duty World League Global Pro League provided several great moments, Group Blue was even crazier.

Three teams all finished last weekend with a 4-2 record, while one squad didn’t even win a single map over the course of three days.

Related: Here are the top five plays from Group Red of the CWL Global Pro League

FaZe Clan, Enigma6, and Ghost Gaming put on a show, battling to the very end for two spots in the $500,000 Stage Two Playoffs later this month. It all came down to the final match on Sunday night, which means there were a lot of close matches with game-changing moments.

Here are the top five plays from Group Blue of Stage Two in the CWL Global Pro League.

5) “What a bomb he just dropped on FaZe Clan”

In one of the most impressive individual performances so far in Infinite Warfare, Chance “Maux” Moncivaez led Ghost Gaming to a 3-1 victory over FaZe on Friday.

The talented assault rifle player took advantage of the numerous long lines of sight on Breakout Hardpoint to drop 43 kills, propelling Ghost to a 250-244 series-clinching victory over FaZe. This is even more impressive when you learn that Maux produced the most kills on Breakout Hardpoint since CWL Dallas in March.

Although Ghost ultimately faltered on Sunday and didn’t qualify for the Stage Two Playoffs, the team played extremely well on the first two days of this weekend—and Maux was a major contributing factor to their success.

FaZe Clan’s newest player, Peirce “Gunless” Hillman, had a lot of remarkable plays this weekend, including his one-on-two clutch against Elevate on Crusher Search and Destroy.

After FaZe planted the bomb, the rest of Gunless’ teammates started to rapidly die around him. Gunless was stuck in a tricky situation, but he managed to find a crucial kill on Elevate’s Jordan “Reedy” Reed to earn his FTL Jump payload ability.

With roughly 20 seconds remaining in the round, Elevate’s Ben “Desire” Wright was running out of time to eliminate Gunless and get the defuse. When Desire eventually challenged FaZe’s newest player, Gunless wisely backed off and then used his FTL Jump to dash behind Desire and win the round.

When Gunless was playing with eUnited, he was considered one of the best Active Camo players in the game, so many fans were curious why he switched to the FTL Jump payload ability in Search and Destroy for FaZe. But this clutch might just be the answer to that question.

In one of the most intense matches of the entire weekend, Enigma6 reverse swept FaZe on Saturday night—in large part thanks to Kade Jones’ heroics on Crusher Search and Destroy.

FaZe jumped out to a quick 3-0 advantage in game five, but E6 responded by taking the next four rounds in a row. Both teams traded the following two rounds, which put E6 on match point at 5-4.

E6 didn’t get off to the best start in round 10 as Nicholas “Proto” Maldonado fell off the map. Despite facing a man disadvantage, Kade earned an extremely clutch triple kill that won the map for E6.

Thanks to Kade’s remarkable play, Enigma6 kept their playoff hopes alive with a reverse sweep of FaZe—and as we now know, this win was pivotal to E6 qualifying for the Stage Two Playoffs.

In the last 20 seconds on Throwback Uplink, FaZe was facing a 5-4 deficit. FaZe earned some initial kills and managed to move the drone close to E6’s base by Barn.

Enigma6 cut down Tommy “ZooMaa” Paparratto and Gunless, but Attach somehow snuck in behind them, picked up the drone, and hit a crazy one-point throw as time expired.

Although FaZe eventually lost this map, Attach’s buzzer beater was still an awesome play that forced overtime and put his team in the best possible situation to win.

Once again, it’s only fitting that the top play of the weekend comes from the final match on Sunday night.

Ghost Gaming and FaZe Clan were in a heated battle with both teams’ playoff hopes on the line. FaZe won the first two maps in this series, which put Ghost on the brink of elimination heading into Precinct Uplink.

With 20 seconds remaining, Ghost held a 7-5 advantage over FaZe, but Gunless managed to get control of the drone to make one final push. Gunless used his Active Camo payload ability in order to try for an invisible dunk, but Ghost neutralized Gunless by stunning him.

As time continued to dwindle, Gunless made the play of the weekend by throwing the drone forward with just three seconds remaining. ZooMaa earned a crucial kill, scooped up the drone, and dunked it home to send the game to overtime.

Similar to Attach’s buzzer beater, FaZe also lost this game in overtime, but it still was a remarkable play in a high-pressure situation.

It’ll be difficult for next week’s teams to top these insane plays from Group Blue, but Call of Duty fans certainly hope it’s possible. Splyce, eUnited, Rise Nation, and Red Reserve will all battle it out in Group Yellow of the CWL GPL starting on Friday, July 14.