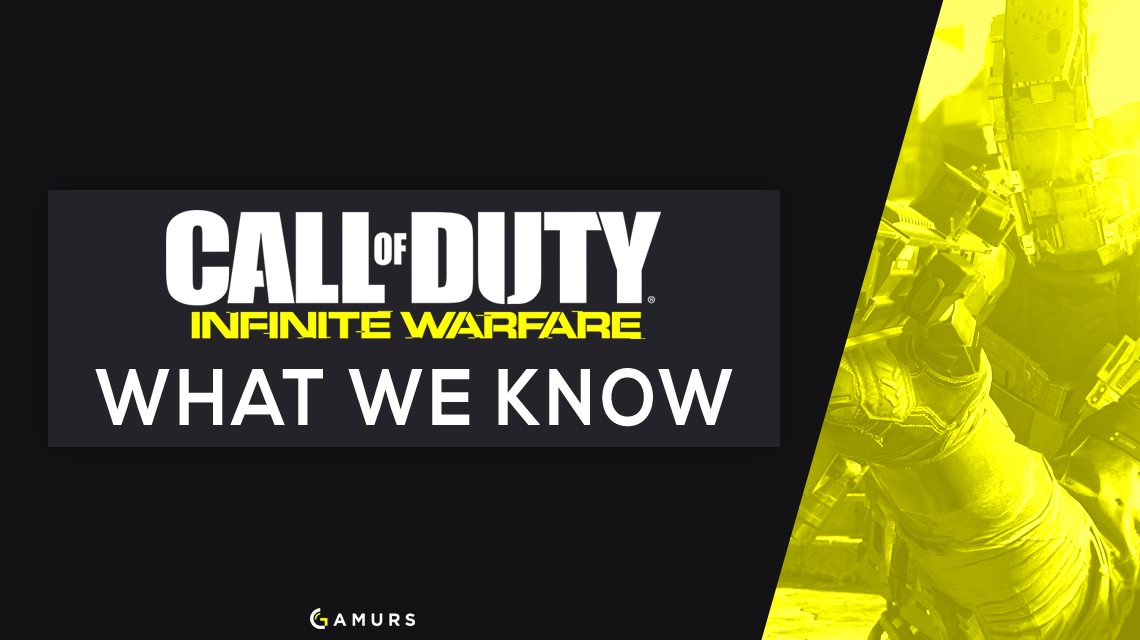 The future of the Call of Dutyfranchise rides on Infinity Ward’s execution of InfiniteWarfare. The next title in the popular series will be released inearly November, but Call of Duty fans such as myself have had theopportunity to preview it early at Call of Duty XP this week. Myfocus during the multiplayer introduction session: what willInfinite Warfare esports be like?

Surprisingly, the multiplayerintroduction, attended mainly by press and YouTubers moreinterested in the casual side of the game, began with a review ofwhat Activision has accomplished thus far with the Call of DutyWorld League. Sam Cooper, Senior Director with Activision, told thecrowd, “The best players on the planet are herecompeting.” Many in the crowd were unaware that the Call ofDuty World League Championship had already begun. Sam was right,the 32 best teams in the world were competing in the largest Callof Duty tournament of all time elsewhere in the venue and theirfocus was entirely on the tournament and not on what the future ofCall of Duty had to hold. Luckily, I had the chance to test thewaters for them.

What are we getting withInfinite Warfare? With another Call of Duty title set in thefuture, you can probably guess. While this game is not going to putplayers in zero gravity environments like some people imagined, itwon’t be going back to a full boots-on-the-ground either. Totell you the truth, Infinite Warfare will be very easy to adapt tobecause it feels exactly like Black Ops III. The movement system isunchanged: boost jumping and wall running are included and arestill an important aspect of the game. Maps are built to encouragewall running flanks and boost jumping trickery – nothing wearen’t used to already. While the game has a overlyingspace-theme, even maps set in space are boots-on-the-ground.It’s as if the players, all of whom are wearing what appearto be space suits, have gravity boots on. Players that are killedon space maps end up floating in mid-air, at least according to thetrailers (I didn’t play any space maps myself).

Activision are in it for thelong haul, spouting off numbers they are proud of, such as havingover 1,000 teams from around the world competing in various Call ofDuty World League events and over achieving 1 billion minutes ofconsumed content.

Activision started off bystating, “With focus on driving frontline engagement andrewarding players of all playstyles, Infinite Warfare is redefining[multiplayer].”

Ahead of actually playing thegame, various aspects of the multiplayer experience were introducedto media in attendance.

Infinite Warfare is buildingupon the specialist system that Black Ops III introduced withCombat Rigs. Though only six different Combat Rigs have beenintroduced so far, each of them is further customizable. Each Righas three “payloads”, one of which is a weapon whilethe other two are abilities. According to the presentation, CombatRigs are “swappable on the fly”, though I didn’ttest this when playing multiplayer. I did notice that several ofthe weapons and abilities are named similarly to those found onBlack Ops III, but new weapons, such as an automatic gun thatshoots in a wide spray, are also available. Each Rig also has three“traits”, which are basically passive abilities orperks unique to each chosen Rig.

In terms of esports, Combat Rigsare an easy transition after playing with Specialists all year onBlack Ops III. However, there are some traits that are unlikely tofind their way into the competitive scene, such as one thatregenerates health at a higher rate after taking damage in afirefight.

A variety of weapons will beavailable in Infinite Warfare. Your standard classes, such asAssault Rifles, Submachine Guns, Sniper Rifles, and Shotguns areincluded. Classic weapons, taken from previous Call of Duty titles,are also going to make an appearance. Because Infinite Warfare isset in the future, we can also expect some futuristic guns, such asDirected Energy weapons that can regenerate ammo after a cool down,therefore never running out of ammo. Guns with multiple functionswere also mentioned.

Weapon crafting will beintroduced. Players can “salvage”, or collect in-gamecrafting currency, that can be used to upgrade weapons. Certainupgraded guns will have their own perks and custom features. Weaponcrafting focuses on variety, so a wide range of weapons will bepossible. Guns rarity also comes into play, and Epic weapons willnot only look cool but have their own additional specialabilities.

I don’t have to tell youthat this weapon crafting aspect should not make its way into Callof Duty esports. Base weapons only. And while nothing was revealedabout the Infinite Warfare ranked play feature, we know there willbe one and we hope upgradable weapons with special perks will notbe included.

Weapons might be where InfiniteWarfare goes overboard, but equipment is up there too. A variety ofnew tactical and lethal equipment are being introduced, including ablack hole projector that pulls enemy players in and crushes themto death, and tracking grenades that seek out enemies that approachclose enough. Adrenaline drip can be used to regenerate health andpersonal radar can be activated to point out nearbyenemies.

Of the various equipment tested,only a few fair enough for competitive play. Instead of aflashbang, a blackout grenade can be thrown to disorient enemyvision, and dome shield, an upgraded trophy system taken from Halo,can be deployed to keep out enemy fire and grenades. With equipmentthat does a lot of work on its own after being deployed, thecompetitive community will have to test and decide what iscompetitive and what is not. In my opinion, we absolutely can notstart the year without any base bans.

I think competitive players aregoing to be happy with the maps. Infinity Ward specifically statedthat they are focusing on fast combat, so that every second counts.They are encouraging head to head encounters with small, fast pacedmaps. When introduced, each map was described by the followingcriteria: shape, number of lanes, and pace. Most maps had threemain lanes and were medium to fast paced.

Because wall running is back,the maps were designed to encourage that as well. Prepare for morepro players falling off the map in clutch situations!

Ah, here we are. Infinity Wardfailed us last time when they gave us Ghosts without even includingCapture the Flag. Luckily they are putting effort towards esportsthis year. All of the current competitive game modes we use thisyear will also be included in Infinite Warfare. Hardpoint, Capturethe Flag, Uplink, and Search and Destroy. The only mentioned changewas on Hardpoint, where the entire floor will change color based onwho controls it.

A new game mode called Defender,like Oddball from Halo, is coming out in Infinite Warfare and is alot of fun to play. A simple game of keep away, but with guns andgrenades.

One thing Ghosts did right wascallouts. Except, the player avatars would yell out callouts,specifically enemy locations. Call outs will come back for InfiniteWarfare, but it is not clear whether they will be voiced or if textblocks will be used. I personally prefer location names to be intext format, similar to how they are in Counter-Strike andHalo.

Watching the multiplayer revealfor the first time, I did feel skeptical. It looked too futuristic,with too many new and confusing abilities and equipment. Of course,those types of things are always showcased in multiplayer revealsbecause they just look cool.

In truth, I had a ton of funplaying Infinite Warfare. I was afraid that using the Playstation 4controller would throw me off because I am used to Xbox One andthat I would have a hard time learning the mechanics, but itactually felt extremely intuitive. The movement system comes out ofBlack Ops III but feels more refined and smooth. In my firstmultiplayer match, I led my team with 49 kills. 49! Either theother players were burgers or I’m a straight boss, but Iattribute this to my many years playing Call of Duty and InfiniteWarfare feeling like any other title in the series.

Infinity Ward was our championin the past, and I think Infinite Warfare brings out all of thegreat aspects we have grown to love from their games. Hit markersfeel perfect, the movement was flawless, and the guns were fun touse. While Call of Duty esports will end up being vastly differentfrom the casual experience, we have a good game on ourhands.

Try Infinite Warfare foryourself when the beta starts on October 14th! Let us know yourfirst impressions in the comments below or on Twitter @GAMURScom.

Josh Billy is a long timeCall of Duty fan and can be contacted by email at [email protected]or on Twitter @Orbit_CH3MISTRY.