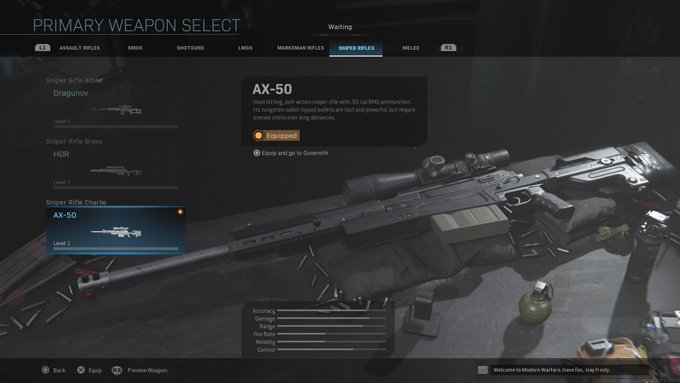 Quickscope kills are one of the most satisfying feats in Call of Duty: Modern Warfare.

For those players who really want to commit to being a long-ranged assassin and improve their chances of securing the second greatest type of kill behind the legendary no-scope, there are several ways to go about it.

Quickscoping refers to killing the opponent in front of you as soon as you aim-down sights (ADS) with your weapon. You’ll only have a few seconds to take the shot for it to register as a quickscope kill since it doesn’t take too long for your weapon to switch to the scope mode.

The main reason why this trick is considered an advanced method of racking up kills is that it abuses the game’s aiming mechanics. You may have realized how you suddenly start shooting like a laser beam once you’re aiming down sights. This effect gets triggered as soon as you start aiming, meaning you don’t actually need to wait for the animation to complete to shoot with pinpoint accuracy.

Here’s everything you need to know to become the next quickscoping CoD prodigy.

The first step in getting better at quickscoping is finding the right sniper for your playstyle. Sure, any gun can work, but some might feel better in your hands or just be statistically better than some of the other options.

The snipers that are currently being touted as the favorites are the AX-50, HDR, MK2 Carbine, and Kar98K. They have good action without limiting movement or feeling stiff. Unfortunately, aiming down the scopes is agonizingly slow compared to some other games in the series, so even with a faster gun, it might feel a little sluggish while you adjust. Though Marksman rifles are noticeably quicker than Sniper rifles when it comes to quick scoping, it still takes a little bit of practice to get used to the routine.

Most players tend to like the damage and movement of the AX-50 because you can easily take away a lot of the bad aspects of the gun with some of the attachments available early on. A rifle like Kar98K, on the other hand, focuses entirely on the movement side of things and is an excellent choice for the “running and gunning” type of players.

Once you find the gun that feels the best or provides the best results in your gameplay, it’s time to optimize its performance by doing the same testing with the attachment library. This is how you can fully customize your sniper of choice to match exactly what output you want.

The optimal play is making sure the movement isn’t hindered, and you buff up the aspects you would usually struggle with, such as recoil or the overall control experience.

If you prefer the AX-50, the Muzzle Brake or Compensator would typically be good for the gun, but though they provide stability, it adds time to your ADS speed. So when you go looking for attachments, take into account the cons just as often as you do the pros, because otherwise, you could end up costing yourself.

Most quickscoping enthusiasts prefer complimenting their weapons with attachments that reduce the overall ADS time and increase the movement speed. You can take a look at the best loadouts for quickscoping here.

Going with a short-range scope can also be a good idea to make sure you don’t miss out on kills if your first attempt fails, and you can’t scope out. This doesn’t mean long-range scopes are bad for quickscoping, however, and you should start scoring the same number of takedowns with them as you get used to quick scoping.

The truth is there is no easy way to get better at quickscoping without practice. Attachments and a good gun are just a few of the ways to get you started in the right direction, but a quick fix doesn’t exist.

If you truly want to improve your skills, get into matches and try it out. You will almost certainly fail dozens of times and feel awful when you try to line up a kill and end up being killed from the side as a result of missing your mark, but that is part of the journey.

Once you get that first quickscope, things will become easier, and you will know exactly what you are improving to achieve. Spend time in matches specifically aiming for those kills, go into the side modes and practice on bots or friends too, the more you do it the better you will be.

If Call of Duty: Modern Warfare is your first experience in the franchise and you don’t know where to start, we recommend going through the video guides available on YouTube

How to complete quickscoping quests in Call of Duty: Modern Warfare and Warzone?

While mastering the art of quickscoping may take some time, quests that become available with each seasonal patch can force you to speed up a little. The Multiplayer game mode is the best place to practice your quickscoping skills.

Despite your quickscoping skill level, the easiest way to complete quests like this is paying attention to your positioning. Giving yourself the positioning advantage will grant you all the time in the world for you to land that quickscope killing blow, which should one-shot your target.

If you’re trying to rack up quickscopes in Warzone, the Plunder game mode will be your best bet since you’ll respawn upon dying. Try to favor positioning yourself on high ground so you can land at least two shots before your enemy notices where you are.

Quickscoping can simply be carved in your muscle memory with time. If you’re committed to adding this lifelong skill to your arsenal, the best way to do it is through playing as many multiplayer matches as you can.

Deathmatch games especially are a great way of getting the most amount of practice in the shortest time possible. Simply gear up your weapon of choice and start gunning around. Sooner or later, you’re destined to get the hang of it, and only then can you begin showcasing your newly gained skill in lobbies with friends.