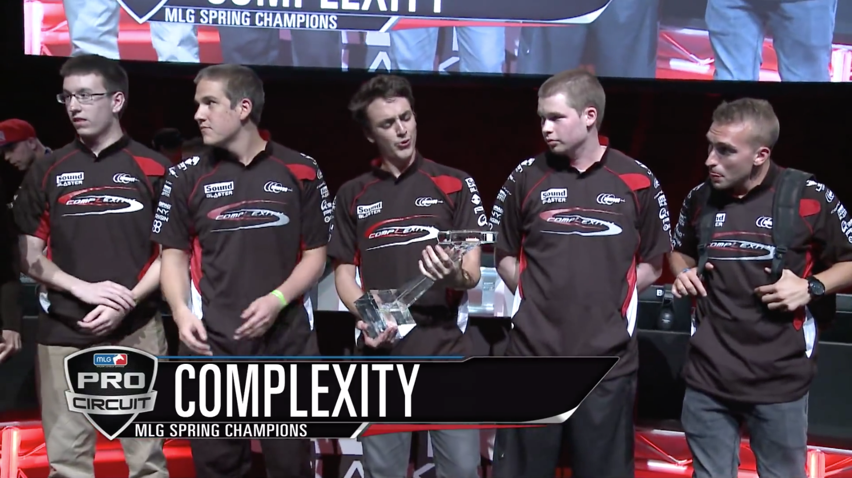 Patrick “ACHES” Price, Tyler “TeePee” Polchow, James “Clayster” Eubanks, and Ian “Crimsix” Porter are some of the biggest names in competitive Call of Duty history—but five years ago today, they won their first event together at MLG Anaheim 2013 and the compLexity dynasty officially began.

Following a fourth-place finish at CoD Champs 2013, coL decided to make a roster change before MLG Anaheim in June, replacing Aaron “TuQuick” Chang with Clayster. And this roster swap changed everything for coL.

Heading into MLG Anaheim, also known as the 2013 MLG Spring Championship, fans were curious to see if Impact would defend their throne or if coL could take the crown. And both teams cruised through the first few rounds of the double-elimination championship bracket.

They eventually squared off in the winners bracket finals, and compLexity beat Impact 3-1 to send the defending champs down to the losers bracket. Impact then took down OpTic Gaming—Matthew “Nadeshot” Haag, Seth “Scump” Abner, Will “BigTymeR” Johnson, and Joe “MerK” DeLuca—to set up a continuation best-of-11 series against coL in the grand finals.

Despite facing a 3-1 deficit, Impact kicked off this extremely intense matchup by winning the fifth map in the continuation series. But coL went on to win three straight maps after that to secure the MLG Anaheim championship and $20,000 first-place prize.

ACHES and TeePee previously won major tournaments in 2011 during the Black Ops Pro Circuit, but for Clayster and Crimsix, this was the first MLG title of their incredible careers. This was also compLexity’s first championship in Call of Duty esports.

This iteration of compLexity went on to win five more major tournaments throughout the rest of Black Ops II—but this first championship at MLG Anaheim 2013 started the run of form for one of the greatest teams in Call of Duty history.