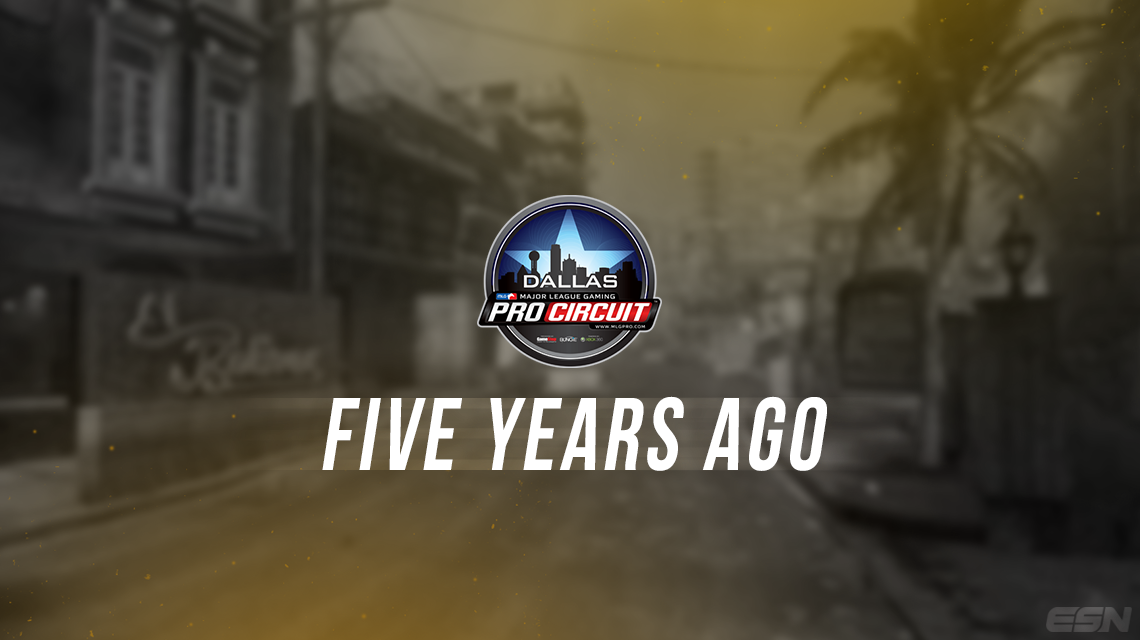 In 2011, I was a senior in high school who had been playing Call of Duty for roughly two years. However, it was just around this time when I first started playing GameBattles and found out about the competitive Call of Duty scene.

As I was just getting into GameBattles, I also was in the process of learning about the Major League Gaming Pro Circuit , which was starting to gain more attention. In a time where Halo was probably the most-watched eSport, MLG decided to add Call of Duty®: Black Ops to their season of professional LAN events.

In honor of it being exactly five years ago that MLG officially added Call of Duty to their Pro Circuit, I will be writing this series of articles about all of the events from the 2011 season, starting with the first event of the year: MLG Dallas 2011 .

When you are first starting out in anything, you have to start small and expand from there. That is the exact approach that MLG took with their first LAN event for Black Ops. Newer fans of Call of Duty might be shocked to hear this, but MLG Dallas 2011 did not feature the usual pool play system that is customary in almost all of the current Call of Duty events.

Rather, MLG Dallas 2011 featured one large open bracket with all of the teams. A loss in the open bracket would send the losing team down to the Losers Bracket, where a second loss would eliminate that team from the tournament.

While the ultimate prize of any event is taking home first place, teams were also playing for the future in this event. The top-16 teams from Dallas automatically earned a spot in the next event for Black Ops, which gave players even more incentive to play well.

With such a large open bracket to start the event, most of the well-known or high-seeded teams did not meet until the later rounds, but the opening stages of the tournament were filled with action-packed matches.

The fifth round of the tournament is where all of the best teams in the game started to meet up. Fifth-seeded OpTic Gaming matched up against the twelfth-seeded Team EnVyUs , with OpTic winning the series 3-1. At the time, OpTic consisted of Will “ BigTymeR ” Johnson, Jordan “ JKap ” Kaplan, Joe “ MerK ” DeLuca and Matthew “ Nadeshot ” Haag, while the Team EnVyUs roster was comprised of Mike “ Hastr0 ” Rufail, Damod “ FEARS ” Abney, Tosh “ StaiNViLLe ” Mcgruder and “Terrorist”.

While these two rivals were facing off, there were plenty of upsets occurring in the fifth round of this event. The thirteenth-seeded Ground Zero swept the fourth-seeded Team FeaR , the fourteenth-seeded IcoNs defeated the third-seeded vVv MoTivaTioN 3-1 and the eleventh-seeded Resistance swept the six-seeded Quantic Influence 3-0.

After these matches, the quarter-final matchups were set. The number one seed in the tournament, Quantic Leverage, had to face off against their sister-team Quantic Nex-TT-hreat. Leverage consisted of Patrick “ ACHES ” Price, Tyler “ TeePee ” Polchow, Seth “ Scump ” Abner and Bob “ Bobby ” Hamwi, while Nex-TT-hreat was led by none other than Doug “ Censor ” Martin. Nex-TT-hreat played extremely well, but Leverage was able to walk away with the 3-2 victory. Also in the quarter-finals, OpTic took down Ground Zero 3-1, Resistance swept IcoNs 3-0 and the number two seed Team Obey defeated the seventh-seeded TwisteD MethoD 3-1.

This set up our semi-final matchups: Leverage vs. OpTic and Obey vs. Resistance. Leverage continued their dominant play with a 3-0 win over OpTic, including a very close 274-261 win on Firing Range Domination. Meanwhile, Resistance continued their cinderella story run through the tournament with a 3-1 win over Obey.

Nevertheless, the Resistance roster consisting of Anthony “ NAMELESS ” Wheeler, Aaron “ TuQuick ” Chang, Ray “ LyaR ” Loftus and “MaiNStreaM” continued to shock Call of Duty fans across the globe as they were able to win both Search and Destroy maps in the series to help them defeat Leverage 3-2, sending Leverage down to the Losers Bracket .

In the Losers Bracket, Team EnVyUs was on fire after their early loss to OpTic. Unfortunately for them, EnVyUs would end up playing against OpTic once again. In Black Ops, if the same two teams met up later on in the tournament, those teams would play a “continuation series.” As the name suggests, this means that teams would continue from the score of their previous match until one team had six map wins. Since OpTic won their first match 3-1, EnVyUs would need to win five maps before OpTic won three if they wanted to advance in the tournament.

OpTic began the continuation series with a big 4-1 win on Villa Search and Destroy, followed up by a 2-0 win on Havana Capture the Flag. Now facing a 5-1 deficit in the series, EnVyUs started to make their comeback with a 4-3 win on Firing Range Search and Destroy, a 300-246 win on Summit Domination and a 2-1 win on Hanoi Capture the Flag. Still down 5-4 in the series, EnVyUs did everything they could to keep their Losers Bracket run alive, but OpTic would not let the series go to a Game 11, winning Grid Search and Destroy 4-3. EnVyUs was eliminated from the tournament with a sixth place finish, taking home $1,400.

OpTic’s win over EnVyUs guaranteed them a top-four finish for this event and set up a rematch with Ground Zero, who was also making an impressive run through the Losers Bracket. Continuing from their previous series, which OpTic won 3-1, OpTic was able to defeat Ground Zero 6-2 to secure their spot in the Losers Finals against Leverage. Ground Zero, consisting of Chris “ Parasite ” Duarte, Johnathon “ John ” Perez, “DoS” and “Burztz,” was eliminated from the tournament with a fourth place finish, taking home $2,800. This was the first LAN event of what has turned into a promising career for John.

Leverage showed no mercy in their rematch with OpTic, winning 6-0 and eliminating OpTic from the tournament with a third place finish and $4,000 cash prize. This win finally set up Leverage’s rematch against Resistance in the Grand Finals. Despite starting with a 3-2 lead in the continuation series, the clock struck midnight for Resistance as Leverage held all the momentum from their win over OpTic. Leverage won four straight maps to win the series 6-3 and earn the title of MLG Dallas 2011 champions.

Similar to John, MLG Dallas 2011 was also Scump’s first career Call of Duty LAN event. Even more impressive is the fact that Scump was able to win a championship in the first event of his illustrious career. It really is enjoyable to reminisce about past events and see where some of these veteran players are in today’s Call of Duty scene.

As the first event of 2011 came to an end, Call of Duty was garnering a lot of attention across the eSports scene. All of the upsets and fantastic gameplay from everyone that weekend helped competitive Call of Duty begin to grow in popularity, and everyone was rife with anticipation for the next event of the season in early June: MLG Columbus 2011 .

Were you in attendance or watching the stream for this event five years ago? Let us know by commenting below or tweeting us @eSportsNation .