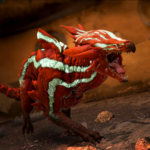 The word “Prowler” evokes imagery of players desperately trying to find a Selectfire hop-up for one of Apex Legends’ SMGs. But Respawn introduced a different type of Prowler to the battle royale.

As part of Apex’s The Old Ways event, the developers created a new point of interest in World’s Edge called Bloodhound’s Trials. The area is a gauntlet that allows players to fight waves of Prowlers in exchange for high-tier loot.

Apex players who didn’t play Titanfall were surprised by the new addition to the game. Respawn hid a dead Prowler in World’s Edge as part of a map teaser just days before revealing the event. The carcass was hidden in Sniper’s Ridge, a relatively empty part of the map that sits near Skyhook. The place is now the location of the Trials.

The species was born as part of the Titanfall franchise. The wild creatures took over the Interstellar Military Corporation (IMC)’s Base Golden in Leviathan after it was decommissioned. Players can square off against the creatures in the Titanfall 2 mission “Effect and Cause.” They’re ferocious quadrupeds with sharp teeth and claws, as well as canine and feline movements.

Why are there Prowlers in Apex Legends?

Apex’s The Old Ways event shed some light on Bloodhound’s past. The Technological Tracker’s official bio defines them as “one of the greatest game hunters the Frontier has ever seen—and that’s about all anyone knows.”

The Old Ways was preceded by an eponymous animated short that recounts the story of how Bloodhound earned the title of Bloth Hoondr. The video also shows the death of Artur, Bloodhound’s uncle, and how losing an uncle and passing a trial molded them into the Technological Tracker we see compete in the Apex Games.

Prowlers came to Apex as a way to translate the lore presented in The Old Ways into gameplay. Bloodhound’s Trials, a new POI, houses an arena that allows players to square off against three waves of Prowlers. Each one is considered a Trial and each wave gives off increasingly better loot at the end. Prowlers have a little over 100 health and can easily outnumber and ambush enemy players if they aren’t prepared.

The arena also has unique objects that trigger additional dialogue when Bloodhound is present. Each one presents a different dialogue that relates to Bloodhound’s past and harks back to the animated short.

A projection of a Charge Rifle is a nod to Bloodhound’s weapon of choice against the Goliath. “Through this weapon, I learned the truth about the Old Ways and the new,” they say in a voice line.

Players can also spot a familiar piece of armor in the arena. “This helm and shield were borne by my uncle Artur,” Bloodhound says upon interacting with the helmet. The armor is part of Bloodhound’s Wise Warrior skin, which dresses the Tracker in Artur’s full suit of armor.

The last of the interactions is the skull of a Flyer, a creature that Apex players are familiar with. “The second creature slátra by my hand,” Bloodhound says upon inspecting the remains. “It is traditional to claim the skull of the first, but that is lost to the winds.” The quote is another callback to the animated short in which Bloodhound destroys the Goliath by freezing it and smashing it to pieces.

Sightings of Prowlers roaming through World’s Edge are incredibly rare. The creatures’ code confines them to the Trials, which makes it nearly impossible for them to escape the arena. But since every rule has its exceptions, Apex players released a live Prowler into World’s Edge after stumbling upon a rare glitch.

Bloodhound’s Trials will likely be a long-term addition to World’s Edge if it follows the example of other Town Takeovers. The Mirage Voyage made its way to Apex as part of the holiday-themed Holo-Day Bash event in December and Kings Canyon features the Singh Labs, designed as part of Wraith’s Town Takeover during the Voidwalker event last year.