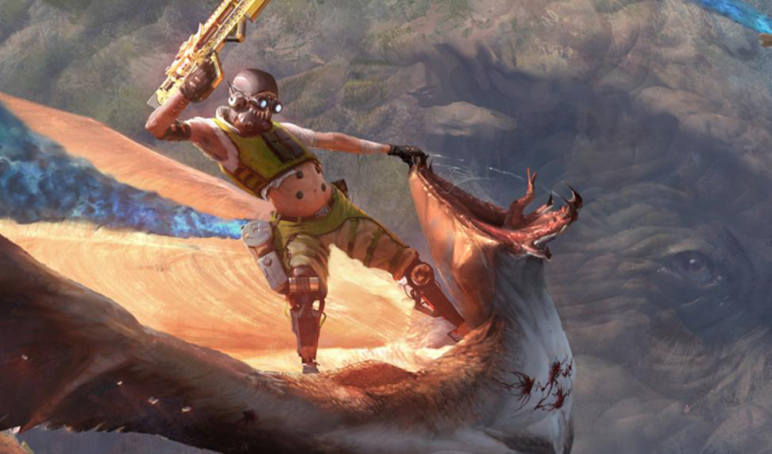 Only one day after the end of the first season, Wild Frontier, Apex Legends has begun to make changes to prepare for the second season, Battle Charge, coming at the beginning of July.

Besides the large Leviathans on the outskirts of the map closing in, Respawn appears to have added an entirely different creature to King’s Canyon in preparation for the new season. These pterodactyl looking winged beasts called Flyers have descended onto the battlefield and entered the fray in an interesting way.

These Flyers might look familiar—they made an appearance recently at this year’s E3. At the end of the Apex presentation at the EA Play event, a trailer played showing the new weapons, legends, and skins announced during the event. For the last few seconds of the trailer, it cuts to a cinematic of legends dropping into the canyon with a large eye of what seems to be a Leviathan in the background as well as the legends zipping past Flyers.

That trailer might not have been the first time you have seen these dragon-like creatures though. Since Apex Legends is set in the greater Titanfall universe, many of the weapons, technology, and much of the lore is shared between the games. This sharing includes the Flyers, which were featured mostly in the multiplayer maps of Titanfall and peppered throughout Titanfall 2 and were seen interacting with the environment and killing other creatures.

What the Flyers bring to the battle

Players have already spotted the flyers around the map and have discovered what they do. First, they can’t be landed on or mounted yet.

There was a piece of leaked concept art depicting Octane riding one of the flying beasts into the battlefield as he’s dropping in. This image might be a hint of what’s to come, but right now it’s not possible in the game.

They can be shot though. Besides being just an exercise in violence and bloodshed, shooting these creatures actually has gameplay benefits. Each are carrying a blue, purple, or gold deathbox. And, if shot enough times, they’ll lose their grip and send the box tumbling to the ground. If shot a few more times, then they die and fall to the ground themselves. Interestingly, the deathbox has the name of any person in your friends list even if they never played Apex. If you are a loner who doesn’t have any friends, then the name will be of one of the developers. This is a cute little touch that adds to the narrative of the game.

System error shows location of Flyers and implications of their appearance

A recent video posted by the Apex Legends account shows that the Flyers have entered King’s Canyon, and also displays where they’ve been spotted around the map. These locations include: the Relay, south of the Artillery, west of the Hydro Dam, east of the Runoff, and just south of the Bunker.

The video mentions a system error, which could hint to more errors and more monsters, like the Leviathans, entering the canyon. This is especially likely since, in the lore, the Flyers usually act as parasites of the Leviathans and follow them around. These could mean that Leviathans could be stomping on land sooner than later. With season two around the corner, we shall see what awaits the legends in Apex Legends.