From a Legendary Hunt to a Roaring Twenties-inspired Soirée, Apex Legends’ events have a central motif that gives each one its own flavor. Apex data miners may have uncovered the theme for the next event—and it’s as if Indiana Jones himself came to the Apex Games.

The next event may have a Treasure Hunter theme, based on findings from several data miners. Extracted assets seem to have a common theme inspired by relic hunting and the game files list a new event as “Treasure Hunter.”

Shrugtal, one of Apex's most prolific data miners, shared that the loot crate file lists an event called “treasure_hunter.” Fellow data miner Biast12 uncovered the visual for a special event-themed loot tick, also under the title of Treasure Hunter. The loot tick's texture appears to be a map that shows the name of several World's Edge POIs. Biast12 spotted The Dome, Lava City, and Skyhook, but it's possible that there are more references to the arena.

Hunting for valuable loot is a core theme in Apex's fifth season, Fortune's Favor, which introduced orphan-turned-thief Loba Andrade as its latest legend. The menu screen also features piles of gold coins and a solid gold Nessie in the background as a possible nod to the theme.

The choice of a Treasure Hunter theme may be a reference to Loba's original design. The character was conceived as a treasure hunter, but it didn't please initial testers. Respawn decided to tweak the legend to become the best thief in the Frontier.

But the treasure hunting motif doesn't stop there. The Battle Pass contains a series of cosmetics that hark back to the concepts of exploration and tomb raiding. Pathfinder's Treasure Trove banner shows a pile of loot similar to the one in the main menu and several weapon charms reference hunting for relics—and even two not-at-all-subtle references to Indiana Jones in the form of a whip and hat gun charms. 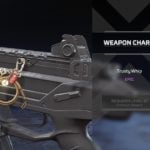 Despite “Treasure Hunter” being listed in the game files, the event may have a different name. The loot crate file, for example, uses System Override's full name but lists the Holo-Day Bash under the working title of “Christmas 2019.” There's clear evidence of a common thematic over the course of the season, however.

Respawn hasn't officially confirmed the existence of the collection event or its theme. But so far, the studio has been reliably launching new events around the course of the season. The next event shouldn't be too far off and its release date could be connected to the unlocking of loot bunkers that are spread out across Kings Canyon.