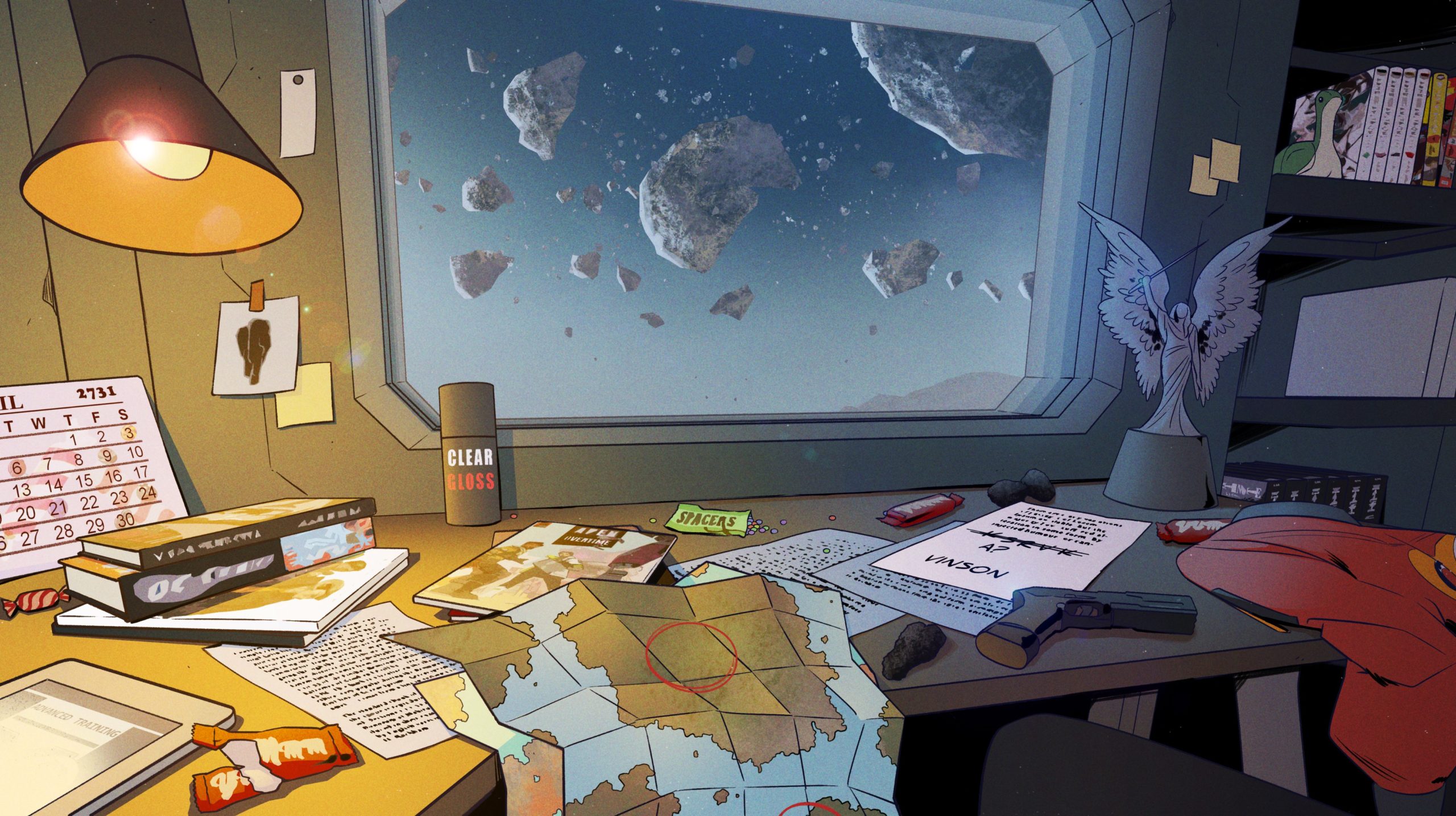 The teasers for the next character in Apex Legends have begun—this time, with a little help from Titanfall. A new official image shares a callback to the franchise, as well as a couple of clear references to manga from our time and a possible nod to World’s Edge.

Respawn posted an image of a room on a spaceship today, similar to the picture of Wattson’s room in a previous teaser. The messy desk reveals a series of items and clues that lead fans all over the Frontier.

The figure on the desk is a carbon copy of the statue in the Angel City map in Titanfall 2, which presumably gives the city its name. It could be a hint to the legend’s past, but it’s also a callback to Titanfall. And there are plenty of those hidden in the image.

A note on the table contains another nod to Titanfall. The paper shows a list of crossed-out initials that line up with the Apex Predators, a mercenary faction in Titanfall 2. Kuben Blisk, Slone, Richter, Viper, Kane, and Ash all make an indirect appearance, but only one of them isn’t crossed out.

The initials for most Apex Predators are crossed out on the page, including Blisk’s first name. It’s also unclear why his name is crossed out. The rest of the Predators died during Titanfall 2, but Blisk escaped during the events of the game and is clearly alive almost 20 years later.

The only letter that isn’t crossed out is A, followed by a question mark. It seems to be a clear nod to Ash, especially with the mention of “Vinson” below it. The word refers to Vinson Dynamics, an in-game company that rebuilt Ash after her destruction in Titanfall 2.

The legend’s possible connections to Branthium and Vinson Dynamics mean Respawn could shift the focus of the lore back to Ash or Blisk and bring in more content from the Titanfall universe.

The map on the desk, however, might point to somewhere far closer than Angel City: World’s Edge, Apex‘s second arena. One of the parts of the map could line up with the Talos arena, which was formerly a Branthium extraction plant before the Meltdown incident. The marking seems to point toward the center of the map where the Harvester was placed.

The Planet Harvester reached World’s Edge in season four, which took place in 2733. The image, however, is clearly dated 2731 based on the calendar on the left side of the image. This means that if the circles do line up with World’s Edge, the next legend knew exactly where to dig to find the mineral.

There’s a picture of a rock taped to the wall, which is presumably an image of a Branthium crystal. If the legend is after the mineral, World’s Edge would be a ripe place to find it after it was discovered on Talos.

In addition to the angel statue, the image shows covers of famous manga series, such as Death Note and My Hero Academia. They could be a hint about the character’s personality or nationality since they seem too specific and meaningful to be Easter eggs.

There are also two Easter eggs about Apex itself. The obligatory Nessie is easy to spot on the rightmost shelf and there’s a copy of Apex‘s upcoming Overtime comic book on the desk.

The first teaser offers several hints at what’s to come and fans likely won’t have to wait too long for more information. The new season is just weeks away and Respawn will certainly post more teasers before then.