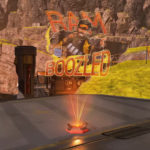 Apex Legends’ battle pass trailer showed off a long-anticipated feature, the upcoming holo-sprays, which will let players leave their mark on the arena with the press of a button. Earlier this month, the official EA website teased new holo-sprays as part of the battle pass, but the latest trailer showed exactly what they look like in-game.

As evidenced by their name, the holo-sprays display a floating hologram that can be used to mark locations, interact with allies, and, of course, taunt enemies. The sprays seen so far feature a legend accompanied by a related quote, but the holo-sprays aren’t necessarily legend-specific.

The battle pass showed different sprays for a series of legends. Loba, Mirage, Wraith, Bloodhound, Octane, and Bangalore all have their likeness in a spray. Players can equip them through the Quip Wheel for easy access.

The holograms display catchphrases for some legends, such as Mirage’s “Bamboozled” and Bloodhound’s “Victory and Slátra.” Sprays won’t get different versions based on language, but hovering over them with a mouse will show a translation, according to lead designer Carlos Pineda.

Players will also be able to interact with other holo-sprays. Pinging an allied hologram will let squadmates “like” it, according to Pineda—possibly followed by a specific voice line.

Holo-sprays are coming to Apex when season six, Boosted, launches at midnight CT on Aug. 18. The new season is bringing in key meta changes, as well as an improved version of World’s Edge, the new Volt SMG, and the new legend, Rampart—the best gunsmith in the Outlands.