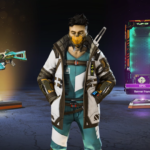 A total of 40 cosmetics including legend and weapon skins, holosprays, and gun charms will be available for crafting and through the event’s free prize tracker. These cosmetic items will join the standard Apex Pack loot pool once the event ends. Respawn also said prices for these cosmetics may be reduced after two seasons.

Here are all of the skins included in Apex‘s Unshackled event.

The Unshackled event will likely be the last event of season 12. The event began today and is set to end two weeks later on May 3. Season 12—which introduced Mad Maggie as a playable character, the Mayhem battle pass, and a number of changes to Olympus—ends May 10, according to an in-game counter. In the past, new seasons began the same day as the previous season ended, so fans can expect season 13 to kick off shortly after Mayhem ends.

Related: Valkyrie player gets booted out of the ring by a drop ship in Apex Legends

Fans have just under a month to complete their battle pass and get in any final ranked games before the season ends. Until then, however, players can celebrate the final few weeks of Mayhem with the Unshackled collection event.