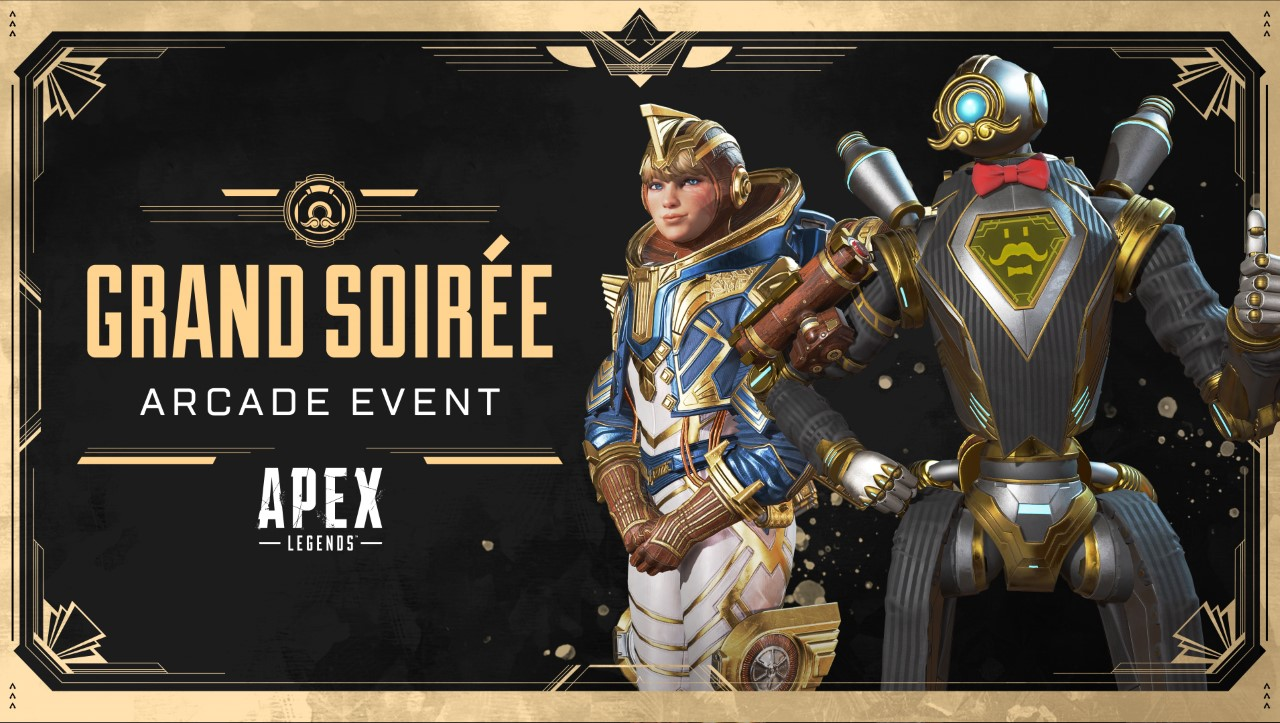 The Roaring Twenties are coming to Apex Legends.

To celebrate the beginning of the decade, the battle royale is hosting its Art Deco-themed Grand Soirée event from Jan. 14 to 28. Players will be able to progress through the Event Prize Track and earn skins for the Peacekeeper, the R301, Havoc, and for everyone’s favorite Holographic Trickster, Mirage. A myriad of cosmetics will also be obtainable through Apex packs and can be purchased directly for a short amount of time.

The event will feature a rotation of seven limited-time modes that will change every two days and promise several “new ways for you to shoot each other.” Each event will also count for your battle pass progression and have its own progression system.

From duos to training dummies, here’s a look at what’s coming and when.

This mode brings back the popular duos mode with a twist: it’s you, a friend (or a random squadmate), and an arsenal of gold weapons. The trailer shows a firefight between players with Mastiff shotguns and points toward a mode filled with weapons that can only be obtained from care packages, such as the Mastiff, Kraber, and L-Star.

If you hate looking for player banners and respawn beacons, this mode is for you. Players will respawn into a living squadmate when the ring closes and will drop down from the sky. Squads that are wiped out are likely out of the game. As usual, airdropping players are sitting ducks until they land, so try to reach a safe location and be extra prepared when dropping in the later stages of the match.

What’s the point of getting all those flashy skins if you can’t see them? Luckily, the Grand Soirée is bringing a third-person mode that lets you see the spoils from your hard-earned Apex packs. Data mining efforts teased changes to the third-person view earlier this month and players speculated it could refer to an LTM. How cool would it be to see Mirage’s swagger-heavy walk when aiming down sights?

In this LTM, the ring won’t give players a break. It’ll keep closing in until all players have been engulfed and will deal “big damage” to whoever’s caught in it. It’s imperative to stay on the move, but rush too fast and you might find your way into a trap.

A returning LTM, Armed and Dangerous made its Apex debut during the Voidwalker event. Players square off against each other with an arsenal that contains only sniper rifles and shotguns. The only protective gear in the arena is a scarce supply of level one body armors. Care package weapons like the Kraber and Mastiff have restricted spawns. The mode will also change the spawn rate on healing items. There’s plenty of syringes, but shield batteries are a rare find.

It’s lights out for Kings Canyon. Nostalgic players can take another run through Apex’s first map in a nighttime setting and revisit their favorite spots such as Airbase and Artillery—and Caustic mains can go back to dropping straight into Bunker. Enjoy the cover of darkness to ambush unsuspecting enemies and hide in the shadows.

The training dummies in the Practice Range return for their vengeance. Apex’s trailer shows a squad going up a horde of training dummies matched in different colors. It’s unclear if they’re computer-controlled or not, but the LTM will likely apply a reskin to other players and make them look like the practice dummies. Matching squads appear to have matching colors, which makes it easy to keep track of how many players on each team you’ve already downed.