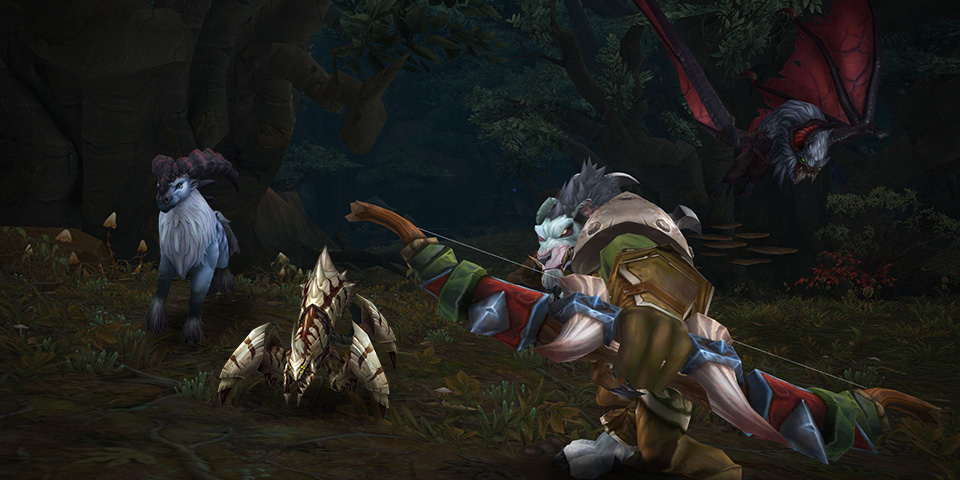 Marksmanship Hunter has been a popular class among players through the early stages of World of Warcraft: Shadowlands. As one of the top DPS classes in both raids and Mythic+ dungeons, many DPS players are turning toward Marksmanship as a viable class for high-end content.

The main appeal of Marksmanship as a class is that it blows the other two Hunter specializations—Survival and Beast Mastery—completely out of the water in the damage department. It also brings enough utility and survivability to the table to keep the spec afloat.

Here are the best talents and builds to get the most out of Marksmanship Hunters in Shadowlands.

Level 15: Master Marksman – As a Marksmanship Hunter, you’ll be focusing on Critical Strike as one of your main stats. Since this talent makes your crits deal extra damage over time through a nifty bleed effect, you’ll want to make the most out of your best stat with an extra damage proc as often as possible.

Level 25: Careful Aim – Careful Aim should be your go-to selection at level 25 for all single-target situations. Although it becomes irrelevant once your target is under 70-percent HP, the initial third of a boss fight is often when you’re going to be stacking all of your cooldowns to build up as much damage as possible, so the extra DPS you’ll get from this talent will be worth it in the long run. Plus, you can get some added value out of it whenever additional enemies spawn with full HP.

Level 35: Steady Focus – Steady Focus forces Hunters to cast Steady Shot twice practically every time they cast it to make the most out of the seven-percent Haste bonus. But it’s immensely worth it to chain your Steady Shots together to keep your focus capped off in both single-target and AoE scenarios.

Level 40: Posthaste – The ability to remove snares and gain a strong boost of movement speed all in one makes Posthaste extremely valuable in both raids and Mythic+.

Level 45: Double Tap – This talent allows two of your core abilities, Rapid Fire and Aimed Shot, to pack so much more of a punch. By making them effectively cast twice whenever activated, Double Tap will boost your DPS substantially throughout the course of extended fights that rely on your most prominent abilities.

Level 50: Lock and Load – The eight-percent chance for a random free Aimed Shot is always nice to have whenever that Aimed Shot does pop up, but the randomness of this ability will cause your DPS to fluctuate from time to time. Marksmanship Hunters will get the most value out of Lock and Load in extended single-target encounters where the passive ability will proc enough times to boost your DPS by a noticeable amount. Additionally, when combined with Double Tap, Lock and Load gives you two free random Aimed Shots for the price of, well, nothing.

The most ideal covenant that Marksmanship Hunters can select is Night Fae.

Night Fae’s signature ability, Wild Spirits, is immensely strong in both AoE and single-target scenarios. Casting it on a group of mobs in a Mythic+ dungeon, or directly on top of a boss in a raid, will make all of your other abilities shine in concordance with it. Try to use Wild Spirits when all of your major cooldowns are up, including Trueshot and Rapid Fire, to maximize your DPS.

Additionally, Soulshape is a fantastic ability to have in the reserves for when you’re in need of a bit of extra mobility. While Disengage has its place on the “mobility hierarchy,” Soulshape is far more versatile and straightforward than the sometimes-clunky Disengage.

As a Marksmanship Hunter, your stat priority is Critical Strike > Mastery > Haste > Versatility.

DPS classes that stack Critical Strike like nobody’s business are rare in WoW, but they’re often the most fun classes to play considering the amount of extreme damage they deal in quick bursts. For Marksmanship Hunters, Critical Strike is incredibly necessary since there’s going to be downtime between your casts when playing the class. Aimed Shot, Steady Shot, and several other core abilities all have relatively long cast times, so making sure they all hit like a truck should be in your best interest.

Beyond Critical Strike, Mastery and Haste are also important for getting off those hard-hitting abilities as quickly as possible, while Versatility can be accepted as a raw damage booster if you have no other options on the table.