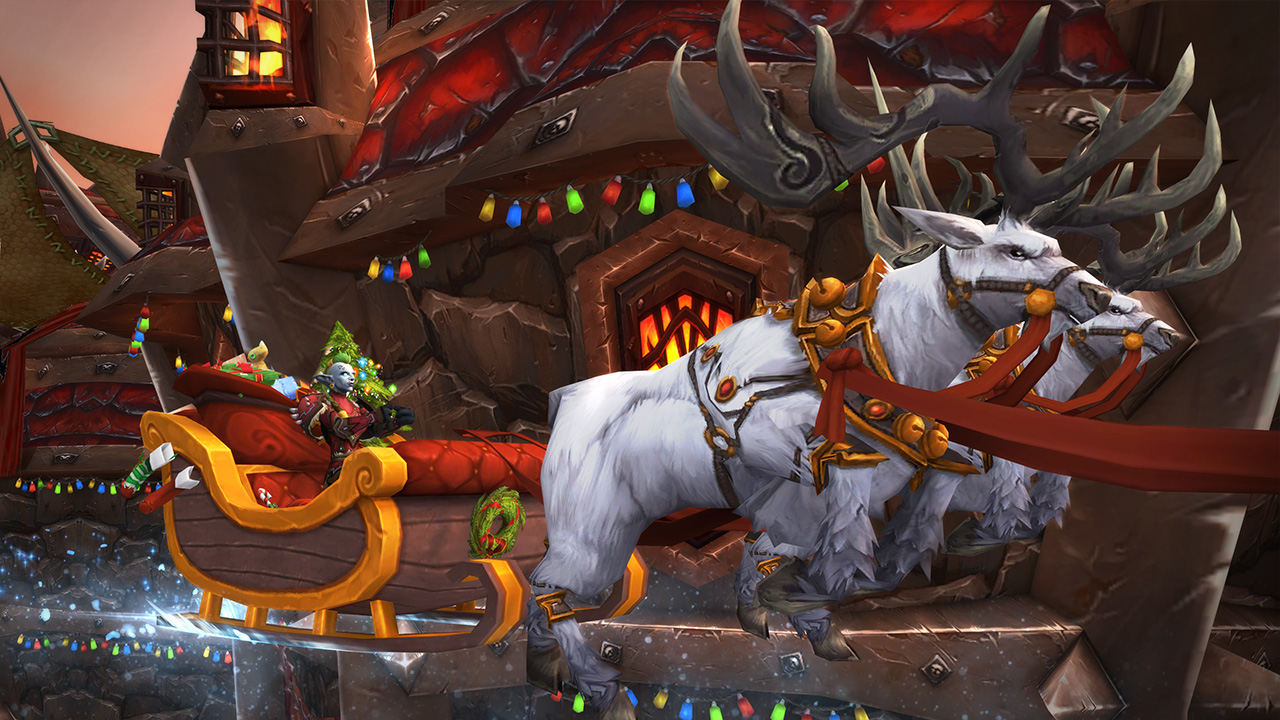 The annual Feast of Winter Veil event is now live in World of Warcraft, with a celebration of the holiday season coming to cities across Azeroth. For the next three weeks, players will have the opportunity to open gifts, collect holiday-themed gear, and celebrate the season with rewards and collectibles found in every corner of the world.

Most notably, players can earn the Merrymaker achievement, which rewards you with a unique title and requires the completion of several other minor achievements throughout the span of the Winter Veil event. Starting on Dec. 25, players can obtain gifts from under Greatfather Winter’s tree. The tree is also a major hub for Winter Veil quests and vendors. Alliance players can track down Greatfather Winter in Ironforge, while he’ll appear in Orgrimmar for Horde players.

The 2021 edition of the Feast of Winter Veil is bringing updates to one of WoW’s oldest events. Perhaps the biggest addition to the Feast of Winter Veil for 2021 comes in the form of this year’s new limited-edition toy, which players can obtain for themselves by visiting Greatfather Winter between Dec. 25 and Jan. 2. While the 2021 Winter Veil toy won’t be officially revealed until Dec. 25, previous datamining done by WoW coverage site Wowhead suggests this year’s toy could be the Rockin’ Rollin’ Racer Customizer 19.9.3. The toy is a customizable remote control car equipped with several different colors and models.

Another update coming to Winter Veil in 2021 is the addition of the Winter Veil Chorus Book, an event-only toy that’s available for purchase from the Smokywood Pastures vendors found in Ironforge and Orgrimmar. Also, toys and battle pets from last year’s Winter Veil event are obtainable through Winter Veil quests.

Toys from the past

Holiday Hats, which drop from various dungeon bosses around Azeroth, are able to be used in transmogrification outfits. Beyond the standard red and green varieties, Holiday Hats can also be found with an updated model from newer dungeon bosses (except for Shadowlands bosses). Several bosses in dungeons from the Legion and Battle for Azeroth expansions will drop a Finely-Tailored Holiday Hat, while older dungeon bosses will drop a standard Winter Hat. Matching winter robes and footwear are also available to be obtained from Winter Veil vendors, Carefully Wrapped Presents, or the Auction House.

During the Feast of Winter Veil, players are able to disguise themselves into “Little Helpers,” a temporary appearance that transforms them into gnomes wearing full holiday regalia. Players can transform themselves into Little Helpers by simply stepping into a PX-238 Winter Wondervolt machine and accepting a 30-minute buff that alters their character’s appearance. The achievement “With a Little Helper from My Friends” requires players to earn 50 honorable kills in PvP combat while affected by the PX-238 Winter Wondervolt buff.

Pepe, everyone’s favorite miniature bird companion, is also returning for the 2021 Feast of Winter Veil. Pepe can be found perched in Ironforge and Orgrimmar, wearing a red winter-themed hat and donning a thick white beard. Clicking on Pepe will allow him to perch on your character’s head for a full hour.