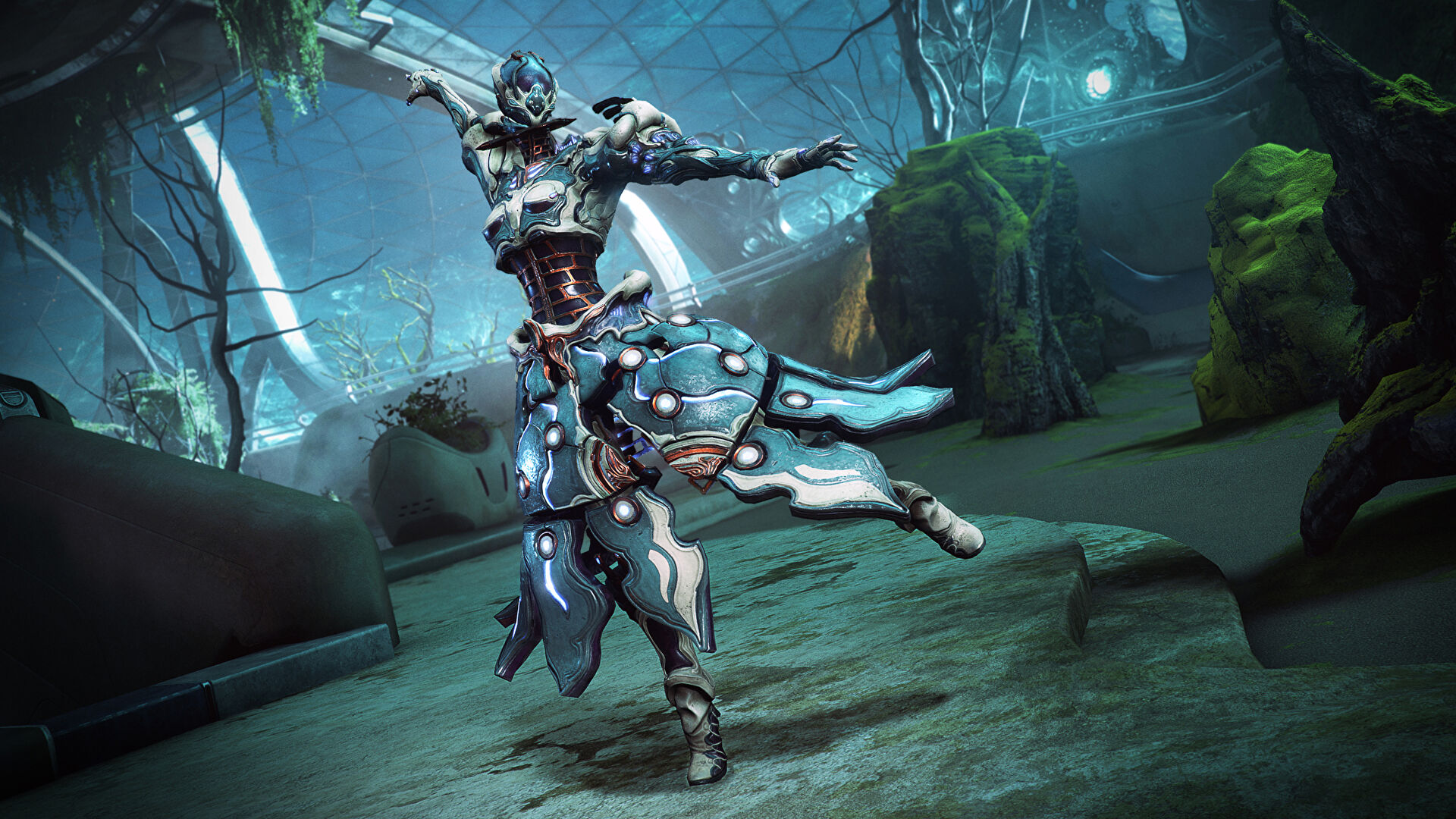 Warframe‘s Angels of the Zariman expansion let players step foot in the Zariman again, this time bringing the former Orokin ship as a full-fledged tileset on the Star Chart. Though the former Tenno ship seemed lost, the events of The New War allowed it to resurface—and brought another Warframe to the game.

Gyre, the 49th unique Warframe, is tied to the story of the Zariman. Gyra was a dancer and an Orokin figurehead hand-picked by Ballas who was aboard the Zariman Ten-Zero before its accident, and Gyre seems to take after her—so much so that Quinn, the head of the Holdfasts, remarks on it if you talk to him with the dancing Warframe equipped.

Gyre’s lore is hardly the only reason to farm this Warframe, however. She leans into the shock element as much as Volt, and though she plays differently than the original electricity-based Warframe, Gyre also throws some crowd control on the table, with a Critical Chance buff and some Energy Regen cast on a cooldown.

Being so tied to the story of the Zariman, the Tenno’s former ship is exactly where you need to go to build a Gyre of your own, though you may need to fulfill a couple of prerequisites before you can even land there. Here’s how you can build Gyre in Warframe.

How to get Gyre in Warframe

All Gyre parts in Warframe

Gyre’s parts drop from Holdfast bounties on the Chrysalith, aboard the Zariman. To build Gyre, you’ll need to unlock all four of her parts. Unlike other story-based Warframes, however, her blueprint is not earned after a quest completion, nor is it available from Cephalon Simaris. Instead, players will have to venture into the Zariman bounties to obtain the dancing Warframe.

Though the drop locations for Gyre’s parts don’t change, the bounties themselves rotate every few hours. For instance, the level 50-55 bounty might be a Void Flood mission when you log in, then swap out to an Exterminate or similar when you log in next. This will not change what drops from the bounty, though it will change the mission type before you have a shot at a Gyre part.

If you want to unlock Gyre and step into the Zariman, however, you’ll also need to complete The New War, which in turn requires a Railjack and a Necramech. After you’ve completed The New War, the game will direct you to the Angels of the Zariman quest, which will be the start of your Zariman experience.

Gyre has a relatively high entry barrier to build since she requires a Railjack and a Necramech, as well as facing off against high-level enemies for her blueprint. Additionally, she also requires a fair amount of Zariman resources, costing 1,100 Thrax Plasm, 12 Entrati Lanthorns, and 40 Voidplume Quills in total to build. If you don’t want to farm for her, however, Gyre is available from the Market for 325 Platinum, which includes the fully built Warframe, as well as a Warframe slot and an Orokin Reactor.

If you have the Zariman resources to spend (maybe you’ve farmed all Incarnon weapons or you just stockpiled on Thrax Plasm and Entrati Lanthorns with a booster), Gyre is a unique Warframe that brings a different kit to the mix. Here are all of her abilities so you can decide if she would be a solid addition to the Arsenal or if you’d just rather stick to the old, faithful Volt for all your shocking needs.

All Gyre abilities in Warframe

Gyre brings a few different playstyles to the table, with most of her abilities being affected by two or three different attributes. This means players are bound to go for an all-rounder build—either by compensating for high-stat mods, such as Transient Fortitude or Overextended, or by avoiding them altogether.

Luckily for players, Gyre has Madurai and Vazarin polarities (V and D respectively), which already saves players some Formas in the process of leveling her. Odds are you’ll still need to bring her to your favorite grinding spot a few times, though, since Gyre benefits from a bit of every attribute.

The Helminth System also offers players another layer of customization with Gyre, allowing them to infuse abilities from other Warframes into her. Those who miss Volt may enjoy the familiarity of having his first ability on Gyre’s kit, while Harrow’s Condemn or Rhino’s Roar continue to be solid choices depending on what you take out.

However you build Gyre, however, keep in mind the 49th Warframe has strong crowd control capabilities, and leaning into them is bound to pay off. You can use Gyre to subdue enemies and make them sitting ducks for the big damage numbers coming in from your weapons, especially area-of-effect ones like the Kuva Bramma and Kuva Zarr.