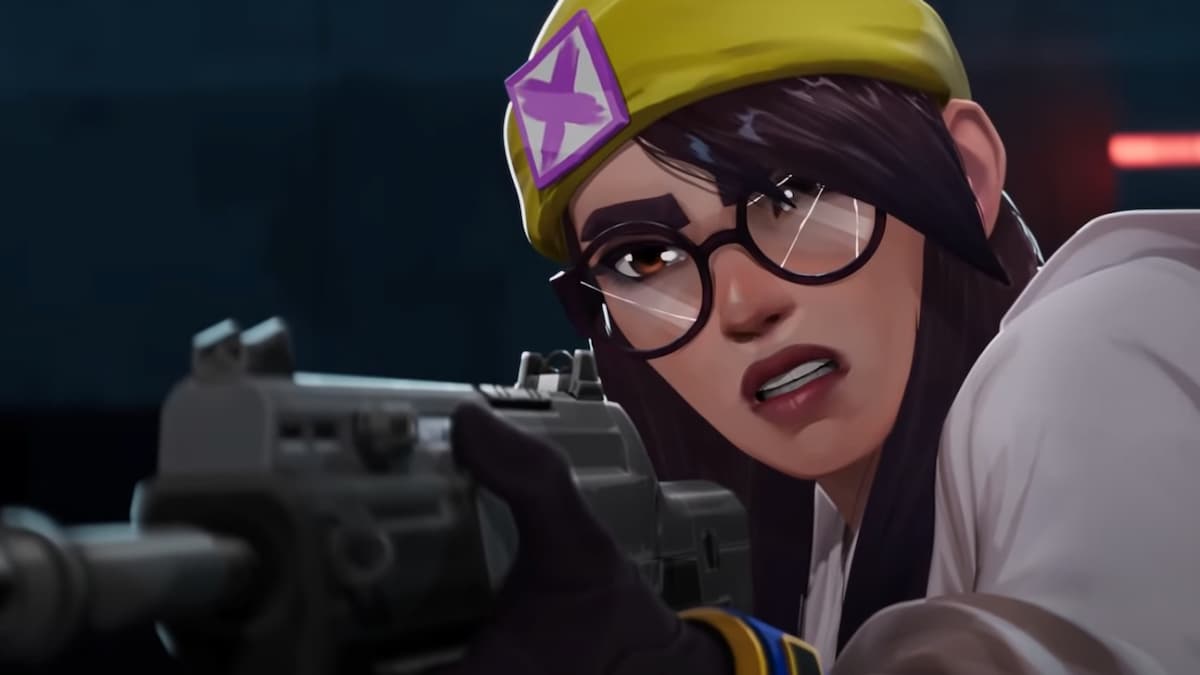 Most first person shooter titles are equipped with lore, even though knowing or not knowing the backstory behind each playable character and area won’t impact a player’s success in the game.

In Riot’s nearly 3-year-old FPS, VALORANT, the lore is downright massive. With each new ranked season, referred to as “Acts,” Riot seems to be adding more and more to the ever-confusing and convoluted story of our favorite agents.

What started off as a simple story has since evolved into an intense standoff between parallel worlds, with the destruction of one or both at stake at the hands of an incredibly powerful natural resource.

VALORANT’s story is so complicated that it would be impossible to capture everything in one article. But if you want to dip your toes in, this is a good place to start.

VALORANT’s story almost entirely revolves around Radianite. If you’ve played the game, you’ve likely heard of it, even though it isn’t something you actually encounter during gameplay.

Radianite is a crystal-like type of rock or mineral that was discovered as a clean renewable energy source sometime after the year 2039, after the First Light.

First Light was an event similar to the asteroid that wiped out dinosaurs from the earth, except this time the dominant population survived. Though it still isn’t clear what exactly happened during First Light, Earth itself was left forever altered, along with some humans who live on it.

Certain people on earth were affected by Radianite differently than others. Those who gained abilities after the exposure from First Light became known as Radiants.

A large portion of agents in VALORANT are Radiants, and this explains most of their special abilities, like Omen’s teleportation and Sage’s ability to create Radianite walls out of thin air.

A large majority of the agents in VALORANT are Radiants, so all of their powers and abilities can be attributed to Radianite exposure. They don’t use any additional tools or equipment to summon their abilities.

The rest of the agents in the VALORANT roster are either humans or robots, in the case of KAY/O. Some of their abilities can also be attributed to Radianite usage, but they use the mineral in external tools or gadgets and wouldn’t be able to perform the same actions without them.

The most practical usage for Radianite was found to be as a clean and efficient energy source. So naturally, corporations around the world began to harness it in large quantities. One company, Kingdom, was the most successful at controlling Radianite. Eventually, three-quarters of the world’s energy production was attributed to Radianite coming from Kingdom. The company proudly states in advertisements that Radianite is “beyond safe.” Brimstone, Viper, Omen, and Killjoy are all previous employees of Kingdom.

The Venice incident, Omega Earth, and the VALORANT Legion

In the very first VALORANT cinematic, “DUELISTS,” Phoenix and Jett are introduced. This cinematic is set ten years after the First Light and the initial discovery of Radianite.

Phoenix and Jett are racing through Venice, chasing each other and battling in pursuit of a mysterious package. This “package,” we will later learn, is actually the Spike. The Spike is a large, powerful Radianite bomb that players have as their main objective in VALORANT. One team is trying to detonate it, while the other one is trying to stop it from going off.

When Phoenix fails to obtain the bomb, it explodes, which sends a huge chunk of the city of Venice into the air. This chunk becomes the in-game map Ascent, known for its long sightlines.

After what becomes known as the Venice incident, suddenly the dangerous potential of Radianite is revealed. What was seen as an efficient, clean energy source became something to fear, as it was clear humans hadn’t even begun to grasp how dangerous the mineral might be.

This event brings us to the “DUALITY” cinematic.

“DUALITY” opens with news broadcasts around the world announcing that somehow, a part of Venice has ascended into the sky.

The cinematic then cuts to a scene on Bind, the Moroccon map in the game. We see that Killjoy is working alongside Viper and Phoenix to try to prevent a second incident and defuse a Spike that has been planted in the ground.

Phoenix, blazing, runs around a corner and makes a shocking discovery. The person he has been battling for control of the Spike… is himself. Viper’s reaction in the cinematic indicates that this isn’t new information to her, but Phoenix is confused. This means that Viper, Brimstone, and Killjoy, three of the more senior members of the VALORANT Protocol, have potentially been keeping information from some of the other members.

The end of the “DUALITY” cinematic shows the other versions of Phoenix, Jett, Viper, Cypher, and Yoru, before zooming out to two nearly identical planets floating in space.

This cinematic revealed a huge part of the VALORANT universe, that there are actually two versions of Earth, likely which emerged after the First Light.

After this information was revealed to fans, suddenly there is an explanation for more of the actual gameplay in VALORANT. Just like in the “DUALITY” cinematic, two squads are going against each other with opposite objectives regarding the detonation of the Spike. After this cinematic, more agents got voicelines that address their counterparts on the other side of the map. One team is from Alpha Earth, and one is from Omega Earth.

From here, this separates the appearances of all agents into two categories in the lore: Alpha and Omega versions of each.

It is understood that in the game, every map except Pearl and Lotus is set on Alpha Earth. With the addition of Pearl in mid-2022 and Lotus in early 2023, VALORANT seems to be expanding the story of the agents on the other side.

The entire map of Pearl, set in Omega Portugal, is somewhat of an homage to the successes of the VALORANT Legion on Omega Earth. There is a large museum there, and the announcements over the loudspeaker that play between rounds talk about the heroes showcased in the museum.

The VALORANT Protocol’s first mission to Omega Earth can be seen in the “SHATTERED” cinematic. In the cinematic, Alpha Killjoy discovers the “support system” that keeps Pearl functioning on Omega Earth. This is the first bit of an explanation we can see of why the agents on Omega Earth might be stealing Radianite from Alpha Earth.

In the newest cinematic, “REVELATION,” we see VALORANT Protocol’s discovery of Lotus. Alpha Astra and Alpha Harbor discover the map, known also as the City of Flowers. The Omega agents in the VALORANT Legion get word via a discovery made by Fade that the Alpha agents have opened the gate. The cinematic cuts off before the two sides begin to fire at each other.

Aside from the cinematics, which mostly showcase VALORANT Protocol and VALORANT Legion missions, there are a few physical clues in the game that also add details to its lore.

The most important area of the game for lore is Brimstone’s Office in The Range. Added in the last act of Episode 3, the office is filled to the brim with clues that not only paint the larger picture of the VALORANT universe, but also tell us a bit more about the agents themselves.

First, there are clues about Brimstone’s past. He has several photos, presumably from his childhood, hanging in the walls around the office. The photos follow his life from childhood through his time in the military.

The most interesting part of the office is that any player who goes in has access to some files on Brimstone’s computer as well as some voicemails left on his phone. These emails and voicemails are rotated out with different patches.

One of the key pieces of information in Brimstone’s office is a voicemail from Fade that details her visions of a broken, shattered Alpha Earth. We eventually learn that this vision describes what may happen when the Nexus, located in the City of Flowers (aka the map Lotus), connects Alpha and Omega Earth.

Another aspect of physical evidence that adds a ton of backstory to the agents themselves is their Dossiers. These dossiers were created by Fade when she was blackmailing the VALORANT Protocol on Alpha Earth. She created profiles of each agent in the Protocol, and writes each dossier with hostility as a part of her blackmailing.

You can see each dossier here, on the VALORANT lore wiki.

Through these dossiers, we have learned the real names and more about the individual objectives of most of the VALORANT agents.

VALORANT has also done an incredible job of giving each new agent their own story as they enter the game’s universe. While the original lineup of agents are mostly known as the senior or founding members of the VALORANT Protocol (aside from Agent 8), each new agent tends to be someone they recruited along the way to join them.

Neon and Harbor, two of the game’s newest agents, have similar stories. They both showed skill, Neon as a Radiant with special abilities and Harbor as someone who had control of a major powerful artifact. These skills caught VALORANT Protocol’s eye, and both Neon and Harbor were brought in from Manila and Mumbai, respectively.

Agent 8 is still a mystery to this day. You may have noticed that each VALORANT agent has a number assigned to them. Their number is the order in which they were recruited into VALORANT Protocol. Brimstone, the founding member and leader, is Agent 1, for example. This number mostly correlates with each agent’s real-life release order as well, with a few exceptions. One notable discrepancy is the lack of an agent assigned to the number eight.

Since VALORANT’s release, there has been no Agent 8. It is assumed that this agent is, due to their assigned number, one of the original or very early VALORANT Protocol members. It is likely that Agent 8 will be added into the game at some point, and we will learn even more about VALORANT’s lore with their release.