Riot Games’ take on the tactical-shooter genre, VALORANT, made waves in the FPS community when its beta launched in April 2020. Featuring the core gun mechanics of games like CS:GO mixed with the hero-shooter sensibilities of Overwatch, VALORANT is looking to become one of the biggest esports titles in the industry.

Though VALORANT isn’t a resource-heavy game, requiring only 4 GB of RAM and an i3 processor, matching the minimum requirements can only get you so far unless you’re as dedicated as ropz, a top CS:GO player who played with a lower-end PC for years before becoming a pro.

Investing in a higher-end gaming PC won’t only allow you to have a smoother gaming experience, but will enable peripherals like your monitor, keyboard, and mouse to reach their highest potential.

Building a PC yourself is the best way to stay cost-efficient, and choosing the best parts should be your priority to ensure your rig keeps up its performance for years to come. Each hardware piece from GIGABYTE in the AORUS series is built to last, but you should still take out your system for a good old dusting at least once a year. AORUS parts feature both top-of-the-line specs and some of that RGB bling for any gamers with disco fever.

Here are some of the best rigs you can put together right away and start your climb to the Radiant rank in VALORANT. 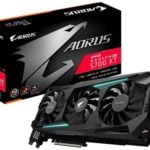 This build costs more than your average entry rig, but the word “entry” can mean many different things. More often than not, an entry-level gaming system will be able to run games to at least 60 frames-per-second but will struggle to keep up in intense situations that cause frame drops.

The aspiring prodigy is the least you should aim for if you’re looking to play competitively. It features an Intel i5-9400F 2.9 GHz processor, which can’t be overclocked with traditional methods. Despite its drawback, the processor is more than powerful enough to run VALORANT at least 100 frames-per-second (FPS) in 1080p when combined with a Gigabyte AORUS Radeon RX 5700 XT graphics card.

If you’re looking to store your archives on your PC as well, then Gigabyte AORUS 500 GB M.2-2280 NVMe SSD might not be enough in terms of storage. You can either upgrade to its 1 TB version or combine it with a hard drive to store everything you don’t need regularly. Don’t forget to install your operating system on your SSD, alongside your games for the fastest load times, though.

While a power supply of this size can look like overkill for a build of this level, power supplies tend to be the most durable parts of any gaming rig. Investing in a quality one will allow you to keep it for years, and even use it in your future rigs.

If you’d like to customize this rig further, you can switch around the parts through here.

Mid-level – The rookie of the year 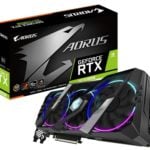 Sometimes pushing 100+ FPS may not be enough, especially if you have a monitor that has a higher refresh rate than what your system can handle. You won’t be able to take full advantage of a 144 Hz monitor with 110 FPS in VALORANT.

The rookie of the year build comes with an Intel Core i5-9600K that has a base frequency of 3.7 GHz. Since it features the letter K at the end, you can easily overclock it up to 5.2 GHz— your results may vary, however. Once it’s paired with a Gigabyte AORUS GeForce RTX 2070 SUPER, the powerful duo guarantees stable frame rates at least above 165, even 240 with appropriate settings, unless you’re streaming.

We also included 16 GB of RGB RAM so you can enjoy a small-time lightning show when you’re done practicing VALORANT. The 500 GB SSD should also be enough to have three-to-four games installed. If you’d like more storage, you can always opt-in for the 1 TB version or combine your SSD with an HD.

You can check out all the other compatible parts with this rig through here.

High level – The player of the year 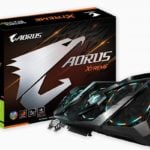 You can surely become the best without using the most powerful hardware available. If you’d like to stream your process to the top, however, you’ll need more firing power than your average gaming PC.

This “player of the year” build features an Intel Core i9-9900K processor with a core clock speed of 3.6 GHz and a total of eight cores. You can also overclock this processor up to 6.9 GHz, but don’t try to do that right away and start by experimenting with closer values to its core clock speed so you don’t end up with a burned-out processor in your hands.

A Gigabyte AORUS GeForce RTX 2080 TI accompanies the i9 processor, and it’s currently one of the best graphics cards of the current-gen. With 32 GB total RAM, this system can easily achieve a stable frame rate of 144 and above even while you’re streaming in high quality. If you aren’t streaming, however, expect to see your FPS meter above 240 almost all the time.

The Gigabyte AORUS 1 TB NVMe Gen4 SSD, included in the system, is also one of the fastest ones in the market, offering a reading speed up to 5,000 MB/s and a 4,400 MB/s writing speed.

We wrapped up this powerful package with an 850 W Gigabyte AORUS power supply, which should be more than enough for the system’s overall power consumption and leave more to spare for future use.

Any additional tweaks to this rig, with compatible parts, can be done through here.

You’ve got your PC, what’s next?

If you’re starting from the bottom, you’ll need to surround yourself with the best peripherals available to allow your reflexes to do the talking while playing VALORANT.

Almost all equipment designed for gaming tends to have the least possible response rate. For a mouse and keyboard, this will transition your actions into the game almost instantly. As long as monitors and headsets ago, the same property will help you see and hear faster than everyone in your match. 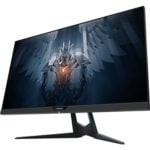 While choosing a monitor, you should be aware of your PC’s capabilities. If it’s having a hard time pushing above 240 FPS, then buying a monitor with a 240 Hz refresh rate would mainly be a waste of potential.

If you decide to build yourself “the aspiring prodigy” or have a system ready that nets you a stable frame rate 165 and above, then you should go with the AORUS FI27Q gaming monitor.

The 27-inch monitor has a 1440p display and has a response rate of one millisecond. Alongside its 165 Hz refresh rate, FI27Q also comes with two USB ports and an earphone jack.

Gigabyte AORUS KD25F, on the other hand, is more suited for those who have a higher-end PC capable of achieving 240 frames and above, or for anyone who decided to build a “the rookie or the player of the year.”

The KD25F features a 1080p display but makes up for it with its 240 Hz refresh rate. It’s also one of the fastest esports monitors in the market with its 0.5 millisecond response time. 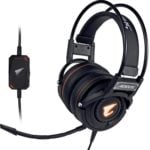 Headsets are generally the most underrated part of any setup. Naturally, no-one wants to spend more than what they’d spend on a brand new SSD for a headset, but hearing is your second line of defense after seeing.

While a gaming monitor will allow you to see better and faster than your opponents, a good gaming headset will help you hear what you can’t see and help you prepare for whoever’s making their way towards you.

The Gigabyte AORUS H5 gaming headset comes with 50mm beryllium drivers that deliver more crisp and accurate sounds. It can also eliminate all the unnecessary vibration that certain sounds may create inside the earcups, making it easier for you to focus on vital audio queues.

Its lightweight design also makes it super comfortable to wear for prolonged gaming sessions, and the suspension headbands prevent any types of “headset dents” from forming. 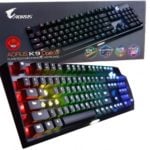 When it comes to gaming keyboards, it’s almost impossible to run into a non-mechanical one. Mechanical switches are more responsive, have a longer lifespan, and feature the least possible response rate.

Classic mechanical switches aren’t the kings of the keyboard world, however. Optical switches have been on the rise for the last a couple of years.

Gigabyte AORUS K9 comes with Flaretech’s optical switches that don’t feature any metal parts. This ensures that your keyboard stays like the day you took it out of its box for the longest time. The splash-proof keyboard’s switches are also swappable, leaving room for improvement if you ever notice your taste in keyboard switches change over time. 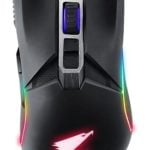 There are all types of gaming mice available in the market, each featuring something that the others don’t have. Gigabyte’s AORUS M5 gaming mouse combines some of the most loved characteristics from different gaming mice, making it the all-in-one complete package.

The M5 ergonomic is similar to Razer’s Deathadder, and it also features a weight adjustment system like Logitech’s G502. In addition to featuring the best characteristics of each mouse, Gigabyte AORUS crowns it with a Pixart 3389 optical sensor that can go up to 16,000 DPI.

The Japanese Omron Switches used in the mouse have a life expectancy of 50 million clicks, making the M5 a buy-for-life purchase.