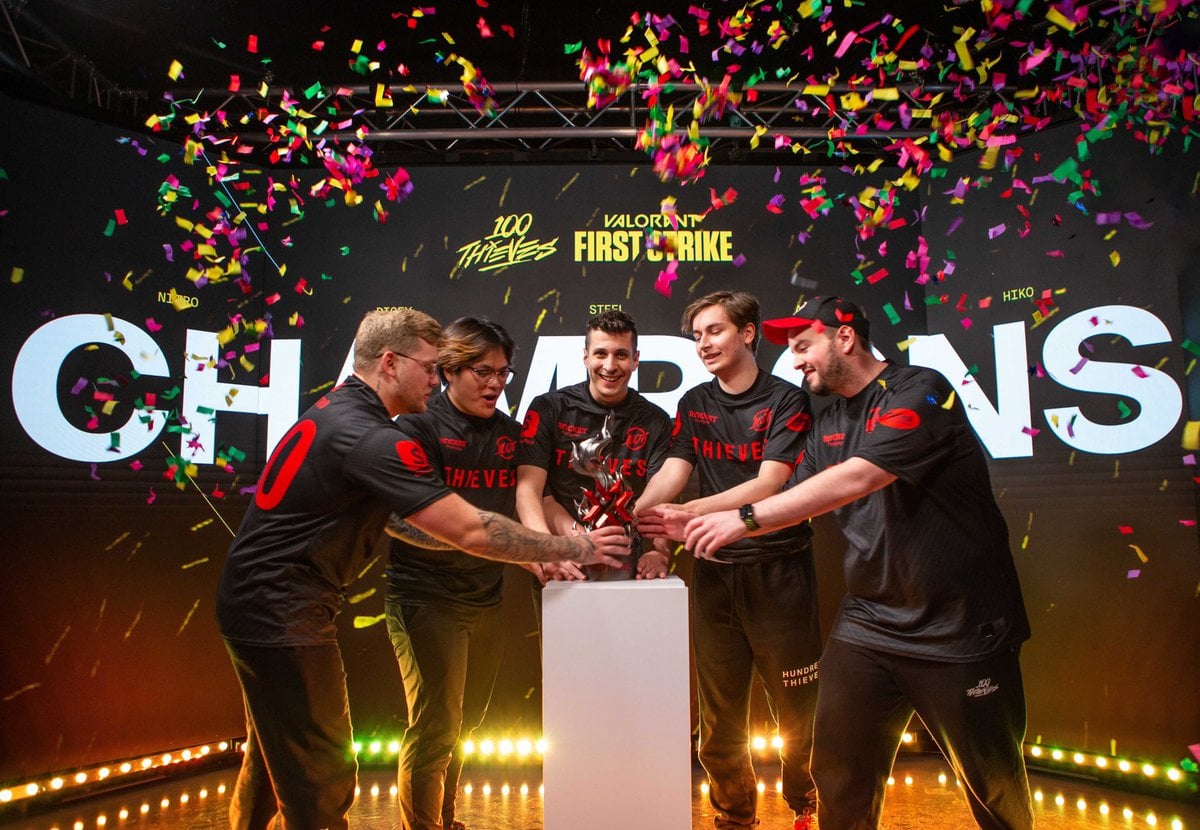 The first two stages of the VALORANT Champions Tour started and ended largely the same for 100 Thieves—a strong start from a roster loaded with some of the most decorated names in NA CS:GO history but a disappointing finish in the regional final for each stage. After reaching Masters Three Berlin via the Stage Three: Challengers Playoffs last week, however, those earlier shortcomings can now be cast aside with the ultimate goal in sight: competing on LAN.

After saying so in the post-match interview on stream following the team’s victory against XSET in the NA VCT Challengers Playoffs, 100 Thieves’ first VALORANT pro and former NA CS:GO star Spencer “Hiko” Martin confirmed the roster’s offline-oriented design in an interview with Dot Esports. He said the “online results don’t really do [the] roster justice,” but he’s excited for the team to get to LAN events.

“We did build this roster for LAN,” Hiko told Dot Esports. “We [added] some of the most experienced Counter-Strike players in the world that have been in countless big event finals. There’s a lot of experience and knowledge.”

The members of 100 Thieves VALORANT weren’t just chosen because they played in lots of LAN events in Counter-Strike. They each bring a unique set of skills and experiences that have led to the creation of a winning team.

Hiko is the rock, the go-to player in clutch situations forged from being called upon to deliver in big moments during his time playing high-level CS:GO for Cloud9 and Team Liquid. It’s by design that he plays agents that can be used in post-plant scenarios on both sides of the map, like Viper and Sova, and he’s thrown into more clutch scenarios than any of his teammates.

Prior to his ban from attending Valve events in January 2015, Josh “steel” Nissan was and still is considered one of the brightest minds in tactical shooters. When other tournament organizers like ESL and DreamHack unbanned him in 2017, he took the opportunity to lead teams like Ghost Gaming and Chaos Esports Club to a handful of victories. After switching to VALORANT last August, he was one of the first IGLs to demonstrate how useful Cypher and Killjoy’s utility could be for locking down sites. He’s not afraid to try new things either, evidenced by 100T’s recent implementation of a triple initiator composition.

Nicholas “nitr0” Cannella has arguably the best track record on LAN of all the players on the 100T roster. He was the constant presence on a highly competitive Liquid CS:GO team that dominated 2019, notching an incredible streak of big event victories on LAN. His strength is his versatility: He can rifle, OP, lurk, clutch, and control the map with utility. 100 Thieves’ newest addition, Ethan Arnold, also has an impressive recent track record on LAN. Between NRG Esports and Evil Geniuses, Ethan consistently delivered team-carrying performances bolstered by his prowess as a dangerous entry fragger.

While Peter “Asuna” Mazuryk lacks the quantity and quality of LAN experience his teammates have, he’s had numerous matches this past year that have made him look like the star of 100 Thieves. Being the sole duelist on a roster filled with experienced winners is a huge leg up and he’s taken advantage of this situation with some fearless, heroic playmaking. He’s also proven to be capable on virtually every viable duelist, giving 100 Thieves’ one-duelist system as much versatility as it allows for.

But as tremendous as Asuna has been in online events and as experienced as the rest of 100 Thieves are offline, they still haven’t played VALORANT on LAN just yet. Based on his own experiences with CS:GO, Hiko is expecting a nearly night-and-day difference between online and offline play.

“VALORANT and FPS games in general are a different beast on LAN,” Hiko said. “The idea of having no ping, you’re able to hold angles, there’s no peeker’s advantage; the game changes. People discover new ways to play the games, there’s different spots that you can play on LAN and can’t play on LAN.”

To prepare for a return to LAN events, which for all the players except for Ethan has been a year in the making, 100 Thieves have been trying to simulate the environment as best they can. For First Strike last year and for the Stage Two: Challengers Finals, the team boot camped in L.A. to have the players all in one centralized location. The org went a step further for the Stage Three: Challengers Playoffs, relocating to Dallas and Complexity’s GameStop Performance Center to have access to “the best ping possible,” according to Hiko.

Aside from a better ping situation, Hiko is a staunch supporter of the boot camp method, saying it “develops chemistry in and out of the game…that translates well in the server.” He says the return to LAN competition “has been a long time coming” for himself and the rest of the team. And with the experience and preparations behind 100 Thieves, their VALORANT LAN debut will certainly be equipped with high expectations.