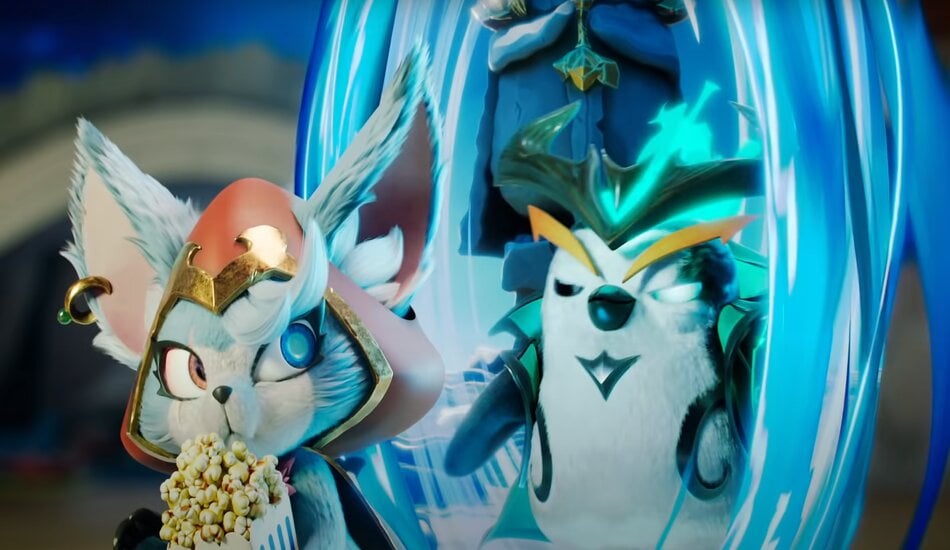 Releasing around the globe on April 28, good and evil will collide across the Convergence in TFT. The black mist has corrupted half of everything, introducing nine new Shadow components. Slightly similar to their original counterparts, these Shadow components can combine with a normal or Shadow component to create 36 new Shadow items.

From Archdemon’s staff and Chalice of Malice to Caustic Deathblade and Guardian Fallen Angel, here are the 36 TFT Set Five Reckoning Shadow items, not including dark spatula items.

Deathblade is one of many “glass cannon” Shadow items, according to Riot game designer Stephen “Mortdog” Mortimer.

Hextech Gunblade of Immortality heals the nearest ally as opposed to the wearer. This TFT Set Five Shadow item works well on temporary and secondary carriers. It also only heals for missing health.

Evil Giantslayer is similar to Giant Slayer in that it targets high health units. Unlike the normal item, Evil Giantslayer deals 50 percent bonus damage without restrictions.

Similar to Sacrificial Infinity Edge, the Shadow Bloodthirster is about “pure aggression,” according to Mortdog. The wearer gains 40 percent attack speed for four seconds once they heal to 90 percent health. But the item deals 25 percent true damage to the wearer at the beginning of combat.

Sacrificial Bloodthirster is a BIS item for Draven within the Forgotten/Legionnaires comp, using the Legionnaires trait for healing and hitting 90 percent health for the additional attack speed.

Ideal champions to use the Spectra Spear of Shojin on, according to Mortdog, are Lux and Tarric.

Zapping enemies and allies, Ionic Dark-Spark provides the wearer with additional ability power from each zap. The Shadow item is ideal on an Assassin, according to Mortdog.

Ideally paired with an item or champion that can replace health, Gunsoo’s Sacrificial Rageblade provides “exponential growth” at a sacrifice of health.

Archdemon’s Staff of Immortality is similar to Gargoyle Stoneplate, according to Mortdog, and is a self-healing item.

Locket of the Silver Lunari

Locket of the Silver Lunari provides increase armor and magic resist at the cost of five less mana per attack. It’s an ideal item that can get placed on a high health front line unit like Tarric.

Similar to Dragon Claw, according to Mortdotg, Refracted Bramble Vest doesn’t have a drawback but does function differently. It grants 200 bonus magic resist, which includes the components.

Eclipse Cape is a Unique Shadow item that does not apply Grevious Wounds, according to Mortdog.

Able to gain health from every unit targeting the wearer, the Gargoyle Stoneplate of Immortality Shadow item in TFT Set Five is a super tanky item.

Titan’s Revenge is another ideal tank item that can also deal damage.

Dark Shroud of Stillness has an increase in power but hits both sides of the battlefield as its drawback, without hitting the wearer. It’s also a Unique Shadow item.

Warmog’s Sacrificial Armor pairs well with a champion or trait that gains health, according to Mortdog.

Turbulent Zephyr is a Unique item that increases the time an enemy is trapped in its whirlwind but at a cost of providing that enemy unit bonus stats once the whirlwind wears off. Turbulent Zephyr should not target carriers like Kayle.

Unstable Zz’Rot Portal is an ideal item to use when wanting to break through a strong front-line defense. Summoned Units, such as Abomination’s Monstrosity, will not spawn an Unstable Voidspawn

Vengeful Trap Claw combos well with Unstable Zz’Rot Portal, according to Mortdog, and is ideal on champions like Jax or Riven.

A Unique item, Sacrificial Redemption heals the entire board but does not heal the wearer. It’s an ideal item on a champion like Hecarim that won’t take damage because the self-damage can’t kill it, according to Mortdog.

When combat begins, the holder and all allies within one Hex in the same row gain a shield that blocks the first enemy’s ability.

Caustic Quicksilver is a Unique item that provides immunity to CC indefinitely at a cost of 20 percent less the maximum health of the wearer.

Chalice of Malice penalizes its wearer while benefiting units one Hex to either side of the item holder.

Providing more attack speed when no enemies are nearby, Rapid Deathcannon is ideal on Draven.

Final Whisper is a Unique Shadow item that is a solid counter to Redeemed, according to Mortdog.

Hand of Vengeance provides its wearer with both benefits while turning off and then back on with every takedown, according to Mortdog.

Statikk Stiletto is a more powerful Stattik Shiv that works well on Varus, according to Mortdog.

Very Dark Blue Buff is a Unique Shadow Set Five item that can produce interesting results when the wearer’s health drops below 60 percent.

A large number of Shadow items still don’t have a best-in-slot due to the meta being so new, and multiple adjustments taking place during the PBE testing stage. This article will get updated with each TFT Set Five Reckoning patch to include balance changes and BIS items per champion.