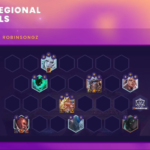 Day two of the TFT North American Regional Finals showcased a total of eight players seeking a top-three finish to advance to the Reckoning Worlds Championship. Robinsongz put the final playoff lobby on notice with three initial back-to-back wins. Practically securing a top-three finish at the NA Regional Finals, Robinsongz broke away from the hot meta comps to play builds that other players weren’t chasing.

The strategy led to a Miss Fortune re-roll build during the fourth game for a solid fifth-place finish. And a Nightbringer re-roll in game six that showcased a three-star Yasuo, Sejuani, and Lee Sin for a fourth first-place win—earning a total of 44 points after five rounds.

Heading into the final game of the TFT North American Regional Finals were five tacticians fighting for the other two Worlds seats: Delicious Milk at 32 points, C9 k3soju at 27 points, Pockygom at 26 points, SpencerTFT at 25 points, and sètsuko at 27 points.

Putting the world on notice, Robinsongz pulled out a fifth first-place finish during game six with Kayle as a main carry. Cloud 9 k3soju and sètsuko fell early in the final game, while SpencerTFT and Pockygom battled for a top-three spot after Delicious Milk claimed the second Worlds seat with a fifth-place finish.

It would come down to the third tie-breaker between SpencerTFT and Pockygom, with SpencerTFT earning that final invite. Representing North America at the TFT Reckoning World Championship are Robinsongz, Delicious Milk, and SpencerTFT.

All images via Riot Games/Wisdom.