Set Seven comes to a competitive end with the Teamfight Tactics Mid-Set Finale, a tournament showcasing the 32 best North American players from the first half of Dragonlands.

The Mid-Set Finale for TFT took place over the course of three days, from Aug. 19 to 21. Playing in the 12.15 meta, 32 players competed for direct invites to the Regional Finals, an invite to Dragonlands Worlds, and a $20,000 total prize pool.

Here are the 32 North American players competing in the TFT Mid-Set. 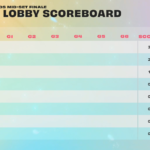 The final day of the TFT North American Set Seven Mid-Set Final showcased a total of eight players. Players competed in six games with the winner of the tournament earning a direct invite to the Dragonlands World Championship later this year. Amde, TL Robin, and Darth Nub started day three with bonus points based on their finishes from day two.

Amde took the bonus points from day two and continued to showcase consistent gameplay throughout the final day of the Mid-Set Finale to win the tournament. The victory gave Amde a direct invite to Worlds later this year. Earning invites to the Set 7.5 Regional Finals were Bertasaurus, Clear, and MD Pockygom.

Here were the final results for the Dragonlands Mid-Set Finale. 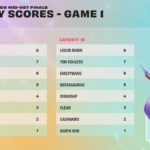 Similar to day one of the TFT Set Seven Mid-Set Finale, players competed over the course of six games with lobbies rotating every two rounds. Only the top eight players advanced to the final day of playoffs. Players also earned bonus points for finishing in the top three of the standings overall during day two.

Following three games played, TL Robin was sitting at the top of the day two leaderboard with a first, second, and fifth place finish. Chakki continued their dominance from day one at the Dragonlands Mid-Set Finale, tied with Robin at 19 points after three games. And close behind them were Amde and TSM Souless with 18 points.

Sitting outside the bubble after four games, Bertasaurus needed two solid games, which he delivered upon with two first-place lobby wins while securing himself top eight for day three. Amde wrapped up day two at the top of the leaderboard, earning three bonus points for the playoffs. TL Robin finished second, earning two bonus points, and Darth Nub edged into third for one bonus point.

Here are the top eight TFT players advancing to the final day of the Dragonlands Mid-Set Finale: 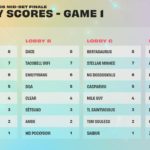 Players were split into four lobbies, with lobbies getting reseeded every two games. A total of six games were played, with the top 16 advancing to the second day of the NA Dragonlands Mid-Set Finale. Bonus points were awarded to players who finished in the top six on day one.

Following three games played, Chakki sat atop the leaderboard with two-first place lobby finishes and all top four finishes up to that point. Milk Guy wasn’t far behind with 19 points, followed by TL Kurumx, Dishsoap, and Aesah all tied at 18 points. Totaling only six to nine points after three games and at risk of not making it to day two of the TFT Mid-Set Finale were players like Saibur, Zhydration, Amde, Within, and BC Socks.

Only 16 players advanced to the second day of the North America TFT Mid-Set Finale. Just missing the cut was Aesah and Jasonjava at 28 points, losing the tie-breakers. Also missing the cut were the upcoming Rainplosion veterans Socks, sètsuko, Guubums, Saintvicious, and Inikoiniko.

Here are the 16 TFT players who advanced to the second day of the Dragonlands Mid-Set Finale.

All images via Riot Games and Wisdom.