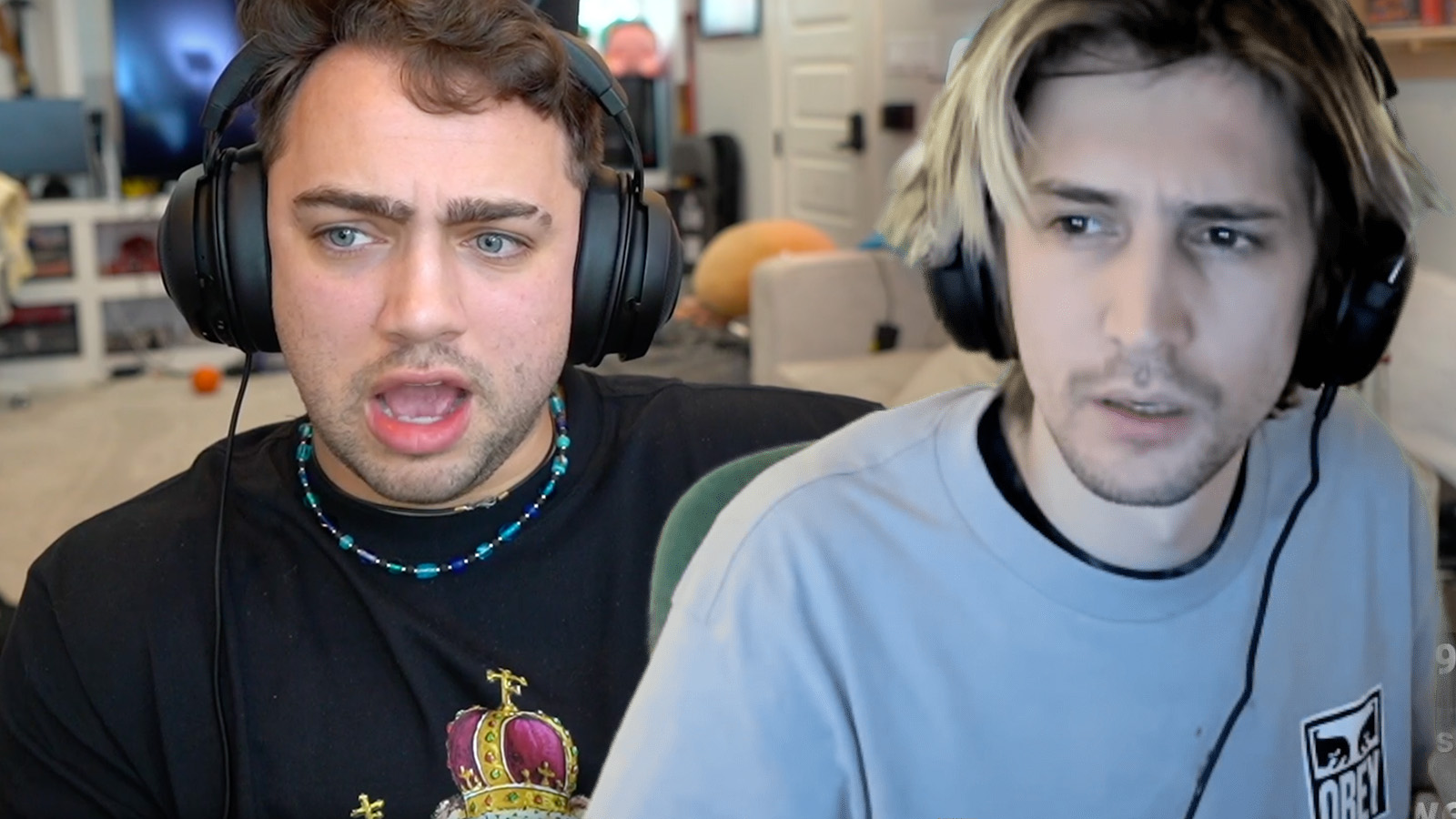 Screengrab via Mizkif and xQc on Twitch

Tension between Felix “xQc” Lengyel and Mizkif boiled over when Mizkif talked about the accusations xQc made about Austin streamers being toxic, a sentiment Macaiyla and Pokelawls shared, during his stream on Sep. 13.

Mizkif sarcastically described them as three people who are known for “having trustworthy answers, friends, and understanding the social works of people.”

xQc wasn’t thrilled about it. He popped up in chat and said, “True. We’re all lying at the same time. Like the time you wouldn’t let the girls pass you in viewers so you re-broadcasted their show against their will, then manipulated them against me when I defended them.”

He was referring to The Real Housewives of Twitch Podcast Adept, Macaiyla, Malena, Maya, and QTCinderella launched in 2020, which Mizkif often co-streamed.

Mizkif spotted xQc’s comment and addressed his claims. He said he knew it would boost his views but figured it would bump theirs up too, and fired back with some accusations of his own.

“Didn’t you do the same thing with Adin Ross when he had Andrew Tate on?” he said. “Didn’t you use him for content as well in the same vein when you just watched his entire stream and he did not say you could do that?”

Sensing he was onto something, he didn’t hold back.

“You did the same thing! That’s interesting…

“He had more viewers than you and you watched the whole stream! That’s kind of weird. But when I do it with my girlfriend it’s a problem when she didn’t give a shit.”

The One True King star wasn’t done there either.

“Felix, if you want to go into drama, let’s talk about how you ditched Creator Clash at the last minute to go gamble by yourself when the Creator Clash was for charity and they were all relying on you,” he said.

He claims the organizers had to change the name and the line-up because xQc ditched the event, and said it was far worse than what xQc accused him of.

“Three years ago, I watched Maya’s podcast. But I didn’t ditch a charity.”

Knowing full well he’d opened Pandora’s box, Mizkif admitted people are “afraid” to confront xQc about their issues with him because he’s the number one streamer on Twitch at the moment.

But even though he looked shaken and rattled, it didn’t stop him from stepping up to the plate. He even tried to call xQc on stream so they can hash it out. He didn’t answer.

xQc responded on his own stream

xQc was just getting started. He dropped a few more comments in chat implying he had more dirt on Mizkif, but chose not to reveal them. However, he defended himself on stream.

First, he addressed the comments Mizkif made about him bailing on events, although he misinterpreted it and thought he was talking about ShitCamp rather than Creator Clash, which he also ditched.

“Why am I the fucking pillar that holds everything together?” he said. “Why am I the glue that makes the event? I’m a fucking nobody, bro. Why am I worth more points because I have more viewers or whatever?”

Then, he said he hates how people expect him to set an example because of how popular he is, which is something he’s never cared about and will always do what he wants.

xQc said it’s not about what you do, but how you do it

Finally, he said what annoyed him about Mizkif’s comments wasn’t the fact he said anything, but rather, the way he skirted around it.

“It’s usually about how open you are about it,” he said.

xQc owned up to doing “asshole moves” himself, referring to the examples Mizkif pointed out, but said the difference is he doesn’t try to hide it, sugarcoat it, or wriggle his way around it.

“I don’t maneuver around it and try to sneak it in somehow,” he added. “Why do people do this? Of course, I don’t like it when people do that, especially when it involves me.”

xQc closed things off by saying he wants all the streamers who have issues with him to come forward and say it. “If you don’t like me, I’d rather you go out there and say it.”

The French-Canadian star appreciates the honesty and openness rather than people coming out of the woodwork with comments like Mizkif’s, which imply there’s some tension.

And when fans said he’s probably burnt a few bridges with his reaction, he said he doesn’t care. “I’d rather be alone with no friends than in a group with ten other people who all don’t like me for some reason but won’t tell me,” he said.

“I’d rather be on my own island than surrounded by people who hate me for a bunch of reasons that I don’t even know exist because they don’t have the balls [to tell me].”