Twitch had its third consecutive month of growth, setting another new record with 2.2 billion hours watched during May, according to Rainmaker.gg, StreamElements’ analytics partner.

For comparison, year-over-year, Twitch has now seen a 37-percent growth, while Facebook Gaming has grown 23 percent to an average of around 400 million hours watched over the last five months.

This milestone was reached despite Just Chatting actually experiencing its first decrease in month-over-month viewership in recent metrics, while games like Grand Theft Auto V, League of Legends, and VALORANT continue to pull massive numbers. 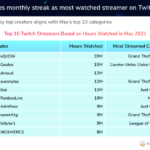 Twitch’s music category saw a slight spike in viewership to 25 million hours watched in May thanks to “a trifecta of German DJs,” Sintica, ThomTree, and Anastasia Rose.