Twitch users have been asking for the ability to subscribe to their favorite streamers on the mobile app for a long time. Now, Twitch has finally added the ability to do so along with a special deal for the rest of October.

This new feature is introducing iOS Sub Tokens, which will let users subscribe to Partner or Affiliate channels directly from the iOS app. And until the end of the month, mobile users can get the equivalent of two Twitch subs for $8.99.

Normally, each token will cost slightly more than a regular Twitch subscription, up to $5.99 from $4.99 per month. But the Sub Tokens don’t automatically renew. Instead, you can pick how long you want to subscribe to a channel for based on how many Sub Tokens you have in your inventory. 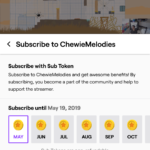 Each token is equivalent to a one-month subscription, so you can select the duration before purchasing the currency to make sure you subscribe for the exact amount of time you want. If you want your sub streak to automatically renew each month while using the mobile app, you’ll need to purchase multiple tokens and assign them to the same channel.

It appears that this $8.99 promotion will only be available for use on a single channel, giving users around a $3 discount on a two-month subscription to a streamer of their choice. 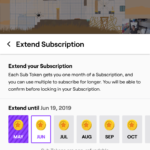 These tokens are a workaround for some mobile systems, but they work exactly the same as a normal Twitch subscription. If you subscribe using the Sub Tokens, you’ll still get access to all of the streamer’s emotes, ad-free viewing, sub-only chat time, and any other benefits.

Despite being a completely different system on iOS than desktop, the only change is how you renew the subscription and the $1 increase, which is likely to account for Apple’s share taken from in-app purchases on the App Store.