Twitch continues to thrive in multiple areas as the streaming platform recorded more than 1.4 billion hours watched in July 2020.

That total is a 67 percent year-over-year increase compared to the 851 million hours watched in July 2019, according to streaming tool developer StreamElements and data and analytics tracker Arsenal.gg.

StreamElements did not have the July 2020 YouTube data to compare with Facebook Gaming and Twitch. Overall, the metrics show that Twitch’s total slipped slightly, but both platforms are still holding well above where they were to start the year.

“While the amount of time spent watching livestreams has fluctuated in the last couple of months as cities begin to open up and people are leaving their homes, the industry is still hundreds of millions of hours beyond Q1,” StreamElements CEO Doron Nir said.  “This is no small feat and speaks to the power and momentum of the medium in terms of attracting both streamers and viewers.”

Getting into the specifics of Twitch, Just Chatting continues to grow as the most popular category on the platform. It gained another 10 million hours watched from last month’s total, putting it at 176 million and a 6 percent increase.

The other top categories saw similar levels of dropoff, with League of Legends, Fortnite, and Grand Theft Aur V shedding anywhere between 5 to 8 million hours in total watch time. Thie biggest drop was CS:GO, which fell from 72 million hours watched to 38 million, a decrease of nearly 90 percent.

As for individual broadcasters, xQc is back on top for the first time in 2020 with around 13 million hours watched, reclaiming a crown he wore multiple times throughout 2019. The biggest surprise was TheRealKnossi, a German streamer who jumped all the way from spot 80 to No. 2, just under xQc in their totals.

The Music and Performing Arts category on Twitch has also risen from 3.6 million hours watched last July to 17.6 million this year, that is a 387 percent increase that Twitch has doubled down on by signing rapper Logic and Linkin Park’s Mike Shinoda to exclusive streaming deals. 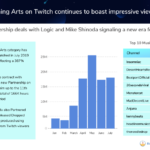 Bob Ross’ The Joy of Painting show is also still going strong after nearly five years of broadcasting old episodes on the platform, with more than 753,000 hours watched in July alone