Twitch and Facebook Gaming continue to show year-over-year growth as both platforms were up in September compared to the same period in 2020, according to Rainmaker, StreamElements’ analytics partner. Neither platform actually increased their hours watched when compared to August, however.

Amazon Games new MMO New World also surged into the top 10 most-watched games on Twitch last month, totaling over 39 million hours watched, with a peak of 13 million hours watched on day two of the game being out. The rest of the top 10 remained consistent, although five of the other nine games did lose double-digit percentages in viewership in September. 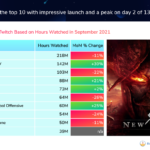