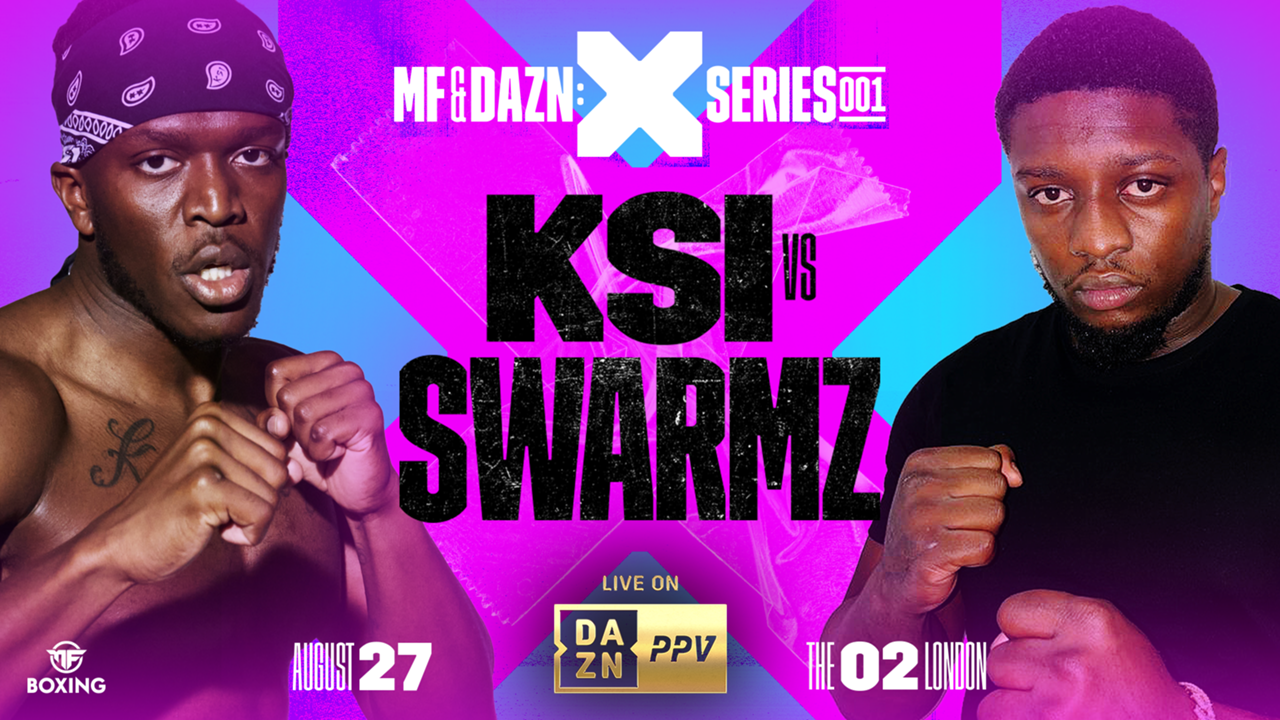 KSI vs. Swarmz is an influencer boxing event that will see fifteen influencers square off in the boxing ring. While many creators will be making their debut in the squared circle, KSI is making a notable return and significant undertaking by attempting to fight two matches in one night.

The event is in the historic O2 Arena in London, England, which is set to host over 20,000 live audience members. The event is available to view via PPV on the DAZN channel and will be available for replay after the event.

Kicking off the event is KSI fighting against Swarmz, and KSI will end the event with a second match against Pineda. Only time will tell if KSI can make history in his boxing return.

The night’s first match marked KSI’s official return to influencer boxing. Shortly after the first bell rang, KSI jumped onto the offensive. Taking command of the ring and repeatedly forcing Swarmz into the corner. Despite being the heavy underdog, Swarmz managed to survive the first round despite being knocked down early into the match. KSI managed to land another knockdown strike onto Swarmz seconds into the second round, though he failed to get back up this time. With his impressive two-round TKO, KSI won his first match back into the boxing scene with plenty of time to prepare for his second bout of the night.

Both Deen the Great and Evil Hero made their official boxing debuts in the night’s second bout, though it was ultimately Deen the Great who walked away 1-0. Though both fighters came out with high energy, Evil Hero was the first to fall in round one. Deen The Great capitalized off his early momentum, keeping Evil Hero on the defensive and landing another knockdown in quick succession. Showing excellent form throughout the match, Deen the Great found his first victory off a third knockdown in the first round.

Sam Hyde and IAMTHMPSN met for the night’s third bout, which happened to be the sole heavyweight fight. Though Hyde entered his first influencer boxing match as the favorite, the first round saw the most methodical match yet as both fighters took most of the first round to size up their opponents. Thompson notably expended significant energy in the first round, repeatedly throwing right hands to varying levels of success.

Hyde took advantage of his gassed opponent in the second round, keeping him at bay with jabs to set up powerful right hooks. Despite being on the backfoot for round two, Thompson managed to stay on his feet to send this bout to the third and final round.

Thompson and Hyde went toe-to-toe in round three, Thompson hoping to overcome his reach disadvantage by closing the distance. However, Hyde managed to outlast his Australian opponent, using his jab to eventually wear Thompson down.

The quickest fight of the night so far, Salt Papi met boxing newcomer Andy Warski for his second-ever match. The southpaw fighter, Salt Papi, landed an astounding flurry of blows that sent Warski crashing to the mat within the first five seconds. After the referee waved off the match, Salt Papi claimed his second victory decisively.

FaZe Sensei returned to the ring for potentially his last fight against King Kenny, who entered the match still looking for his first win after losing to fellow FaZe member Temperr.

Sensei opened up round one with a strong right hook connection to King Kenny. After an explosive start, Kenny utilized his range advantage to keep Sensei at bay and provided relatively few openings for his opponent to capitalize on. Round two saw an even more strategic approach from Kenny, who consistently stifled Sensei’s offensive attempts.

To start round three, Sensei finally landed another powerful strike onto Kenny and got several more follow-up hits in the clinch. Targeting the body in a flurry of several strikes, Sensei returned to form in round three, largely keeping his opponent on the backfoot. After a losing third round, Kenny entered round four with a more aggressive approach though they slowly lost momentum as the final round progressed. With time running out, Kenny launched a flurry of blows to finish the fight.

In the first Judge Decision of the night, the victory was awarded to King Kenny.

In one of the most anticipated fights aside from KSI’s main event fights, both Deji and Fousey came into the ring looking for their first ring. Ultimately, Deji attained his first victory with a one-sided win.

Deji immediately put Fousey into the corner with a series of left hands. Fousey managed to escape the corner, only to walk right into a flurry of more punches. The southpaw Deji had firm control over the ring in round one. Deji showed an impressive defensive game as well, slipping most of Fousey’s strikes. Despite the one-sided first round, Fousey managed to stay on his feet and make it to round two.

Deji had a similarly explosive start to round two, setting up one-two punches with his jab and expertly reading Fousey’s movements to dodge his few strikes. Into the second round, the damage to Fousey became apparent as his eye swelled, and Deji landed the first knockdown.

Despite taking countless strikes, Fousey somehow managed to remain standing into the fourth round. After sustaining a bloody nose, Fousey was forced to throw in the towel to hand over Deji his first career win.

The two undefeated fighters, Slim and FaZe Temperr, entered the ring for the co-main event, hoping to dodge their first loss. The bout turned into a brawl early on as both fighters delivered wide punches to begin the round.

Slim displayed impressive technical ability, impressively dodging his opponent with deft head movement and strategic clinches to set up his strikes. Slim entered into round two with the same strategy as round one, closing the distance to Temperr, landing a hit, and clinching to escape. In round two, the stalwart Temperr eventually fell to Slim’s barrage of attacks. Knocking Temperr’s lights out—Slim remains undefeated.

The night’s final fight saw KSI return to the ring to take on the 2-5 professional boxer Luis Alcaraz Pineda.

KSI quickly landed two early knockdowns only seconds into the first round, though Pineda claimed both were illegal shots. KSI easily took ring control, Pineda’s only escape from his opponent’s powerful shots being the clinch. Though moving into round two, Pineda appeared extremely uncomfortable against his opponent, repeatedly claiming behind-the-head and behind-the-body shots against KSI.

Round two saw KSI continue to break down Pineda, his opponent running around the ring with extremely limited offensive abilities. A left hook by KSI in the final minute of round two sent Pineda to the mat once again, though the Mexican fighter remained in the bout and survived into round three.

An uppercut in the clinch ended the fight, giving KSI his second TKO of the night. Though certainly not the fight of the night, as Pineda’s defeat was met with a cacophony of jeers, KSI fulfilled his promise of winning both of his bouts.