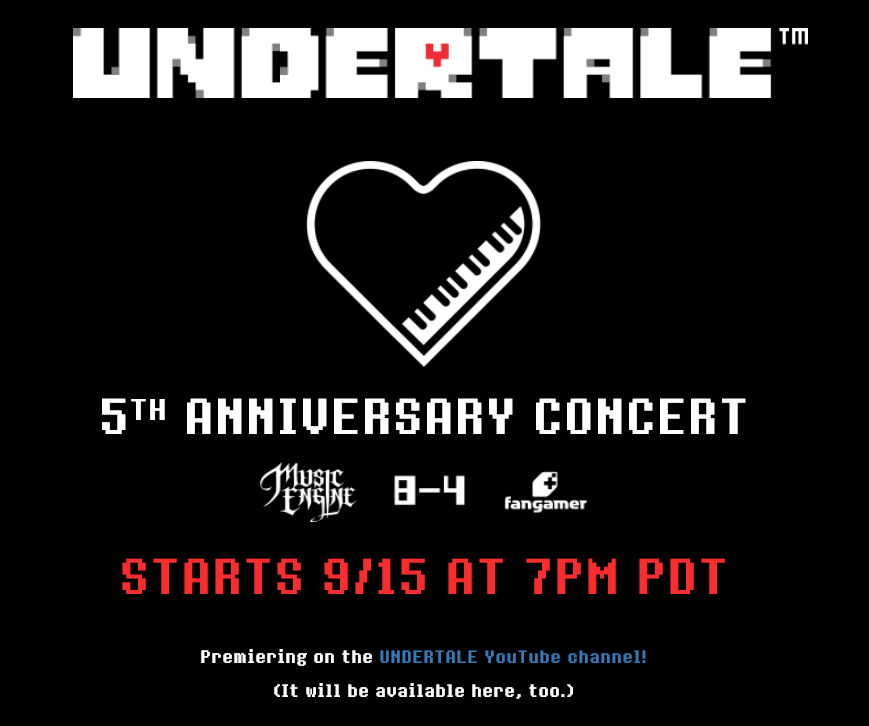 Undertale fans can experience a free concert in celebration of the game’s fifth anniversary next week. Toby Fox, the developer of Undertale, announced the free concert, which will be streamed next week on Sept. 15 at 9pm CT.

The concert is organized by Fangamer and 8-4 and will feature remastered footage from MUSIC Engine’s “7th Concert,” which was initially held on May 6, 2019 at Suntory Hall in Tokyo. The original concert featured orchestrated versions of the original songs in Undertale. Fans worldwide can now enjoy the new renditions of the Undertale soundtrack since the concert will be streamed on the official Undertale YouTube channel and website.

Toby Fox also designed a shirt for the fifth anniversary, which features an original hand drawing. All proceeds from the shirt will be donated to the United Way COVID-19 response and recovery funds. The shirt’s front won’t be revealed until the day of the concert, but the shirt’s back says “Stay Determined,” which was a significant theme in the game.

Undertale’s soundtrack has garnered much attention since the game’s release. Fox’s original songs led to him composing other soundtracks for games such as Little Town Hero. Some songs have also become popular on TikTok, with most people not realizing they were originally featured in the famous indie game.

Fans can sign up to be notified via email one hour before the concert and learn more about the merchandise and Undertale series on the official website.