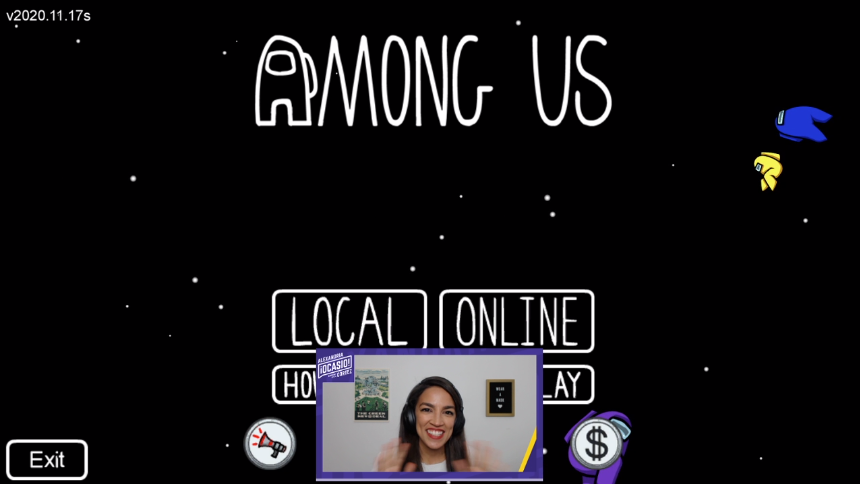 American congresswoman Alexandria Ocasio-Cortez teamed up with Canadian member of parliament Jagmeet Singh on Friday for a five-hour Among Us livestream to raise funds for those facing food and housing insecurity during the ongoing COVID-19 pandemic.

The two politicians were joined by popular Twitch streamers like HasanAbi, xQc, Northernlion, and more. When all was said and done, the livestream helped raise over $200,000 for community support organizations offering help to struggling families and communities during one of the worst economic crises in history.

The event was initiated by Singh, who on Thursday invited the congresswoman to join. Ocasio-Cortez, who is the congressional representative for the 14th district of New York, quickly agreed to Signh’s proposition, saying “Canadian Members of Parliament & US Members of Congress venting each other into space. What could go wrong?”

During the stream, Ocasio-Cortez linked to the Act Blue November charity drive, which is dedicated to helping families facing eviction and food insecurity. During the stream alone, that donation page saw over $200,000 in donations, which will be split among six different charitable organizations doing essential work in American communities.The organizations who will be receiving money from the charity drive are:

“This crisis is slated to get worse,“ the donation page for Act Blue said. “In December, special protections preventing renters from being evicted during the COVID-19 pandemic are scheduled to expire. This week, New York City saw its first eviction since the beginning of this crisis. This pandemic is not over. These six organizations have been on the ground in our communities, feeding families & delivering legal guidance for years.”

Friday’s fundraiser on Twitch was not AOC’s first Twitch event. In October, Ocasio-Cortez streamed on Twitch for the first time to play Among Us with U.S. Rep. Ilhan Omar and a number of huge Twitch personalities like Myth, Pokimane, Gus Johnson, and more. The goal of October’s stream was to encourage people to get out and vote. That broadcast peaked at over 439,000 viewers, which was one of the largest viewership records in Twitch history.

Among Us is a murder-mystery party game originally released on June 15, 2018. The game, which is available on PC and Mobile devices, spawns every player as a crew member on a spaceship. Some of those crew members are imposters who the true crew members unveil and eject from the ship. The goal of the imposters is to methodically kill the other players in the game without being caught. Whenever a player dies, players can call meetings to discuss what they saw and who they suspect of being the killer. At the conclusion of each meeting, the crew members can then take a vote for who to throw into space, and if they eliminate all the imposters they win.

Although the game was released in 2018, it has seen a huge surge in popularity during 2020, with thousands of streamers playing the game for their audiences and hundreds of thousands of players participating in the social deduction game with their friends. Among Us is typically played in conjunction with a Discord call, where players mute themselves during gameplay but unmute themselves during ship meetings. During the pandemic, Among Us has served as one way for groups to participate in social activities from a distance.

With the wild popularity of Ocasio-Cortez’s two streams in the past two months, it seems that the congresswoman is yet again breaking new ground for how politicians can effectively interact with their constituents. Ocasio-Cortez, who was recently reelected to congress for a second term, has been known for her cutting-edge use of social media strategy since her huge upset victory over Joe Crowley in the Democratic Primary for the 14th District of New York back in 2018.