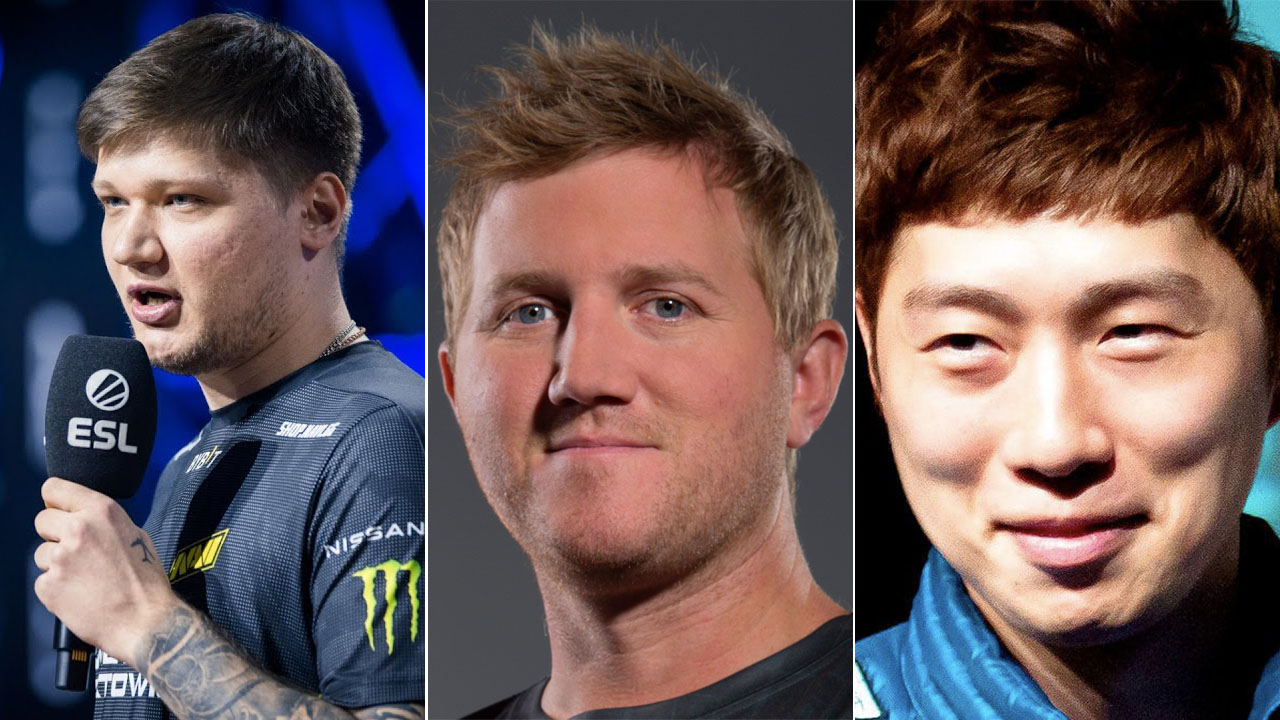 Esports wouldn’t be the same without its many heroes: the superstar players that surpass adversity, those who clutch despite the insurmountable odds.

This article was supported by Picklebet.

You probably remember the biggest moments—that neverending parry, Coldzera’s jumping no-scopes, EG’s history-defining comeback against megacreeps. But arguably more important than the one-off highlights are the legacies individual players have left on not one championship, but their games as a whole.

These are just some of the pro players who left a permanent mark on their respective scenes. It’s not a complete history of all the biggest stars, although everyone on this list has left an impact that would warrant documentaries of their own.

While Thresh was the first esports player to make waves by winning John Carmack’s Ferrari in a Quake duel, Fatal1ty’s impact on the Quake scene and broader esports was immensely bigger.

Inspired by Thresh’s victory, Fatal1ty picked up Quake and headed to a local event in Dallas. The FRAG 3 tournament would launch Wendel’s career, which saw him win around $450,000 in a raft of one-vs-one games like Quake 3, Unreal Tournament, and Painkiller, with victories in games with smaller scenes like Alien vs Predator 2 and DOOM 3.

Wendel also treated video games as a true profession. He maintained a strict exercise regime and was one of the first players to genuinely build themselves into a brand. That savvy and commercial awareness helped Wendel become the face of esports in the West—even as arena shooters like Quake fell out of favor compared to team-based games like Counter-Strike.

The Quake champion was profiled on national television, with profiles in 60 Minutes and newspapers. Wendel established a peripherals brand with Creative, a brand you can still see on headsets and motherboards today. Wendel’s approach didn’t make Quake, Painkiller, or Unreal Tournament more popular. But his approach to the game helped professionalize the broader industry, lighting the path for other players and orgs in their own quest to turn esports into a career.

Just as Fatal1ty was establishing his brand and reputation in the West, there was another titan rising in South Korea. While Counter-Strike 1.5, and later 1.6, became the prominent esport of Western audiences, the Brood War expansion for StarCraft took on a life of its own in South Korea.

The genesis of StarCraft’s popularity can be traced back to the rise of the country’s internet infrastructure. South Korea invested heavily in internet infrastructure in the late 90s, causing the now-famous culture of PC bangs (also known as internet cafes) to emerge. Players were looking for games with robust online functionality, and StarCraft, powered by Blizzard’s Battle.net servers, was the perfect fit.

Players began competing in online ladders and tournaments, and before long organized competitions were commonplace. Korea held a tournament to mark the launch of the Brood War expansion in late 1998, and within a couple of years a pro Brood War league, complete with TV cameras and corporate sponsors, was born.

In those early leagues, a star would soon emerge: Lim “BoxeR” Yo Hwan. BoxeR was famous for his creativity and innovative strategies using the Terran race, which at the time was considered weaker than the Protoss or Zerg factions.

BoxeR’s strategies and his extreme micromanagement of individual units (particularly dropships and SCVs, the latter of which he would famously rush opponents with) would go one to define the next decade of Terran play in StarCraft, and later StarCraft 2. At his peak, BoxeR won two World Cyber Games gold medals, the Starleague twice, and the KPGA Tour. He continued to play for 12 years, an astonishing feat given Brood War’s extremely fatiguing nature.

Counter-Strike has no shortage of legendary figures who established powerful legacies in the community and their respective regions. But few characters in Counter-Strike, or esports more broadly, have cast as dominant a shadow as Aleksandr “s1mple” Kostyliev.

The Ukrainian superstar, who has a net worth of over $1 million according to Picklebet, has posted an HLTV rating of 1.15 or better from 2014 to 2017, and nothing lower than a staggeringly reliable 1.26 from 2018 onwards.

His ability was evident even in his early career with Hellraisers and Flipsid3 Tactics. Chemistry issues with his teammates and a conviction for evading a ban meant the Ukrainian missed out on two years of majors. But s1mple quickly reminded the world of his abilities in a whirlwind stint with Team Liquid, where his performance propelled the North American team to the finals of ESL One Cologne 2016, and a strong showing at MLG Columbus that year.

An adjustment on Na’Vi’s part allowed the team to better accommodate S1mple’s natural aggression, fully unlocking the superstar’s immense talent. As noted by voo, s1mple gets more kills across more of the map than many other AWPers. S1mple also doesn’t scope in as much, often waiting for other sounds (gunfire, grenades) to mask his positioning. That element of surprise is often crucial, especially since few players in the world have the confidence or accuracy to wield the AWP the way s1mple does.

The Ukrainian had already debuted on the HLTV Top 20 players list at No. 4 in 2016, and he has either been rated the world’s best player or within the top two, for the last three years running. Only the Danish player Nicolai “dev1ce” Reedtz has appeared in the top ratings more than s1mple, but dev1ce has never won the honors of being rated the world’s best player. S1mple has done so twice.

When you are paired against someone considered a bonafide beast in their lane in your first professional match, and you completely take them to the cleaners—in front of the cameras, no less—people will naturally have high expectations.

And ever since his famous obliteration of Kang “Ambition” Chan-yong in that debut, televised League of Legends match, Lee “Faker” Sang-hyeok has become one of the true titans of not just League, but global esports. His maturity early on—combining raw talent and aggression with the composure to never take an engagement further than necessary or worthwhile—established him as a force to be reckoned with.

Faker would win the world championships not once, not twice, but three times. Beating SK Telecom T1 was not just about beating the best team in the world, but whether teams could overcome Faker’s legendary force of will. Under his supreme skill, the team mounted several impossible comebacks and monstrous plays.

Like Fatal1ty before him, Faker also stood out for another reason: he broke through the gaming mold to become a worldwide icon. Faker’s legendary status saw him profiled in mainstream media, magazines, and the business world. He has his own profile on the official Olympics website. Faker even had his own documentary in 2017, which compared his life and success to that of the Brazilian footballing legend Ronaldo.

His aggression and play set the benchmark for expectant mid laners in League of Legends worldwide. And despite having a few ups and downs with the rise of new talent, Faker continues to prove himself a dominant force in the LCK. Take T1’s success this season: they’ve just become the first team in the history of the league to win 18 games in a perfect split.

Similar to League, Dota 2 has its own cache of immortal titans. And while Puppey might not be the first name that appears at the top of the Dota 2 prize pools, his consistency over the entirety of Dota 2 is well and truly worthy of respect. The Estonian pro is the only player to have competed in every Dota 2 International since its inception, first under the Ukrainian banner of Na’Vi and from 2014 onwards with Team Secret.

Puppey was one of the most legendary figures in the early Dota 2 days. Despite only receiving access to Dota 2 three weeks before The International 2011, Na’Vi went undefeated, taking home $1 million for their efforts. Na’Vi then continued their good run by finishing second twice at The International 2012 and 2013.

After a disappointing 7th at The International 2014, Na’Vi made major changes to their squad, resulting in the release of Puppey. That opened the door for the formation of Team Secret, with Puppey leading the new European super-squad.

Hopes were high initially, but the team was only able to finish seventh at The International 2015, despite dominating performances at majors earlier in the year. Team Secret then opted to completely reform itself around Puppey, although the team struggled throughout most of 2016.

Eventually, however, Team Secret’s fortunes would recover. A top 6 finish in 2018, a top four finish in 2019, and a third-place result in 2021 has left Puppey with a legacy as the most successful Dota 2 player of all time—even though OG’s back-to-back International wins means other players have amassed greater winnings.

Still, Puppey holds the advantage in raw consistency over a much longer career. And he hasn’t done too bad for prize money: his winnings of $3.7 million makes him one of the most successful esports players of all time (although other players, like Faker, have earned more money over time through streaming and endorsements).

No list of pro players would be complete without tipping a hat to one of the fighting game community’s greatest stars: Daigo “Daigo” Umehara.

Along with that flurry of parries at EVO 2004 under intense pressure—which overshadowed the fact that Daigo went on to lose in the grand final—Daigo’s career is defined by his legendary consistency over two decades. Since winning his first nationals in Street Fighter Alpha 3 in 1998, Daigo has gone on to feature in the final rounds of regional, national and international tournaments.

Daigo’s winnings currently total more than $259,000 from almost 60 tournaments, a figure which is expected to soar higher once Street Fighter VI is released. His long career has also seen the 40-year-old be immortalized in books, statues, and even a manga series. So even if Daigo is no longer the favorite to win EVO or the Capcom Pro Tour, his legend and service to the fighting game community will undoubtedly live on for generations to come.

This article was supported by Picklebet.