Rocket League is running an extended crossover with the NFL to hype players up for the Super Bowl, bringing a new game mode, new challenges, and more to the game on Feb. 2.

Dropping right after the next major update, the NFL Super Bowl LV Celebration will give players a chance to play the new Gridiron game mode to complete event challenges and earn NFL-themed rewards. 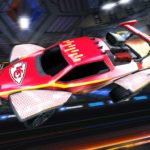 Gridiron is a four-on-four mode that comes complete with hash marks and the NFL logo at the 50-yard line. The standard Rocket League ball is replaced with an American football and touching the ball automatically attaches to the roof of a car so you can “run” with it.

If another player touches the ball, that player becomes the ball carrier. This applies to opponents and teammates, opening the door for hand-offs to teammates or steals by the other team.

Players with the ball can only use a single jump, because a double jump or trying to move directionally in the air by rolling or flipping will drop the ball. This method can be used to pass the ball around the field if you can nail the timing.

Each goal is worth three or seven points depending on how the goal is scored.

Demolitions are still active, and if you leave the marked area while holding the ball, you will instantly drop it.

While playing Gridiron, there will be three Event Challenges to complete in order to unlock the Gridiron Guru Player Title, NFL Wheels, and 20,000 XP before the event ends on Feb. 8.

The NFL Fan Pack is also making a return to the Item Shop from Feb. 2 to 8, offering players a chance to grab decals for their favorite teams.