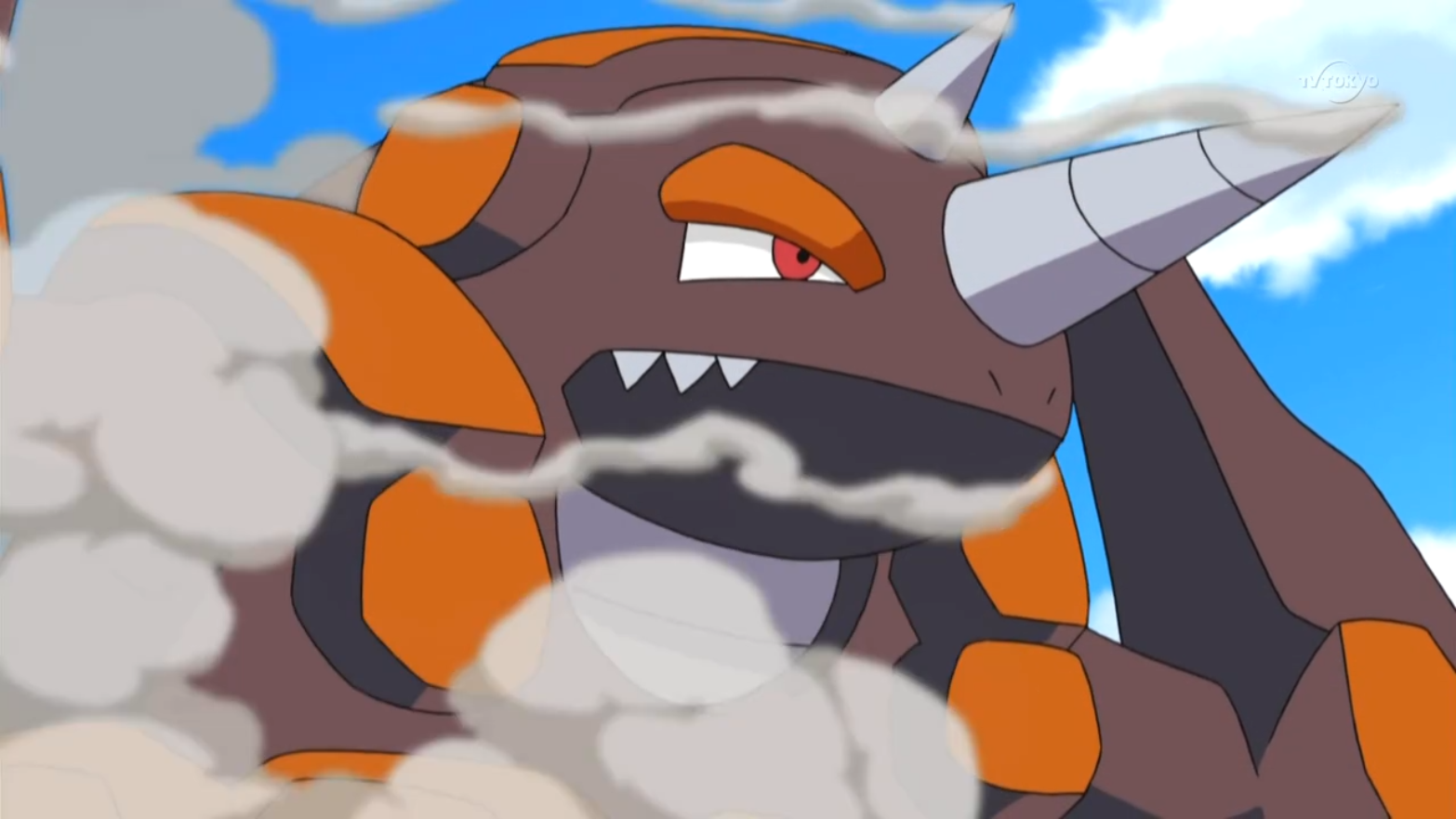 Rock-type Pokémon will stick in the minds of kids who grew up with Pokémon forever. The games and the anime have the Rock-type gym leader Brock as the first gym battle we experienced.

We have come a long way since then, away from the basic look of Geodude and Onix, from the stereotypes that Rock-type Pokémon must be bulky, slow, and hit harder than the average Pokémon. The current roster of Rock-type Pokémon is diverse and each has its unique identity, making them stand out among the sea of Pokémon present in the franchise.

So for you, we have cherry-picked the diamonds in the rough. Here are 10 of the best Rock-type Pokémon of all time, ranked from 10th best to best of all time.

List of the best Rock-type Pokémon of all time

Like every other Generation, Generation Two had its primary “joke” Pokémon, Sudowoodo. It isn’t intended to be a useful addition to your team, and that’s okay. It’s just a rock disguised as a tree with a silly little face, so we’re fine with it.

Sudowoodo was most likely not confusing to newer Pokémon fans when it appeared in Pokémon HeartGold and SoulSilver, as they were used to seeing rock types as things that weren’t rocks. The older fans saw a tree that was resistant to fire, which was quite the switch-up from Generation One. The moment Game Freak showed us you don’t have to make every Rock-type look like a rock was like pulling the rug from under our feet.

In the end, it showed the Pokémon world was not as predictable as it seemed.

Remember the feeling of playing and completing your first Pokémon game? For many Pokémon fans, Pokémon FireRed and LeafGreen were the games they began with, and to see the twist at the plot’s climax, where Giovanni was the final Gym Leader, was a real shocker.

The first Pokémon Giovanni would send out was Rhyhorn, and after taking out the rest of his team, the final Pokémon of his team was also Rhyhorn. As if one of those beasts weren’t enough to take on, he had two of them, and the second one was five levels above the first. This Rock type was certainly Giovanni’s favorite, and it left a lasting impression on veteran Pokémon players.

Coalossal is one of those Pokémon that no one can end up disliking. Its concept is cool enough for the general Pokémon fan to like it, while also possessing a very Generation One-esque design philosophy to satisfy the Genwunners, being pretty simple and not flaunting too many elements.

At first glance, it appears that Coalossal fares terribly in battle, due to its dual-typing sporting common weaknesses, and two different four times effective weaknesses. While that would be the case, Coalossal is made to thrive in Generation Eight, especially in VGC.

Its ability Steam Engine lets it max out its Speed stat after being hit by a Water move, which its partner can do for it after Coalossal has Gigantamaxed to take less damage. If it also holds the item Weakness Policy, it can double its offensive stats at the same time. Its signature Gigantamax move, G-Max Volcalith, is also one of the most powerful moves in the game.

Even in the current Series 12 VGC format, Coalossal has top-cut a couple of tournaments in a meta that does not favor it at all. Now that’s impressive.

Look at this thing—it’s a floating head with a gigantic nose. And it has a mustache that straight-up looks like overgrown nose hair. Ken Sugimori is already a legend, but he deserves a raise for this design.

If you look closely, Nosepass actually has three mini-noses, two on either side of its body and one on its back. Instead of smelling, these mini-noses are used to detect prey and opponents., Probopass can launch these mini-noses to track down targets and attack them. It is also said that sometimes these noses will get lost and never return back to Probopass. Hilarious.

Sporting a very rare dual type in Rock and Fairy, Diancie is a mythical Pokémon that has a unique concept and origin. It is said that a random Carbink may very rarely undergo a mutation that will turn it into Diancie. Suddenly, a harmless little floating pebble is now the rock princess of doom.

Diancie has some of the highest defensive stats across the entire roster of available Pokémon, as well as a Speed stat that makes it ideal for Trick Room, which it learns naturally through leveling up. Furthermore, Diancie possesses a visually-stunning Mega Evolution that increases its offensive stats to unprecedented heights while giving it a massive boost in Speed. It’s a shame that Mythical Pokémon like Diancie aren’t allowed in most competitive formats of Pokémon.

The Scyther line never disappoints, not with Scyther back in Generation One, and not with Scizor in Generation Two. Both these Pokémon are super cool and popular even to this day. Then, in Pokémon Legends: Arceus, Kleavor was revealed to the public, and once again, Game Freak hit a home run.

Arguably even cooler than Scizor, Kleavor is a split-evolution of Scyther introduced in the semi-open world title released at the beginning of 2022. Kleavor possesses literal axes for hands and is incredibly hostile to anybody that threatens it. Other than looking epic, Kleavor was also one of the Pokémon chosen by Arceus to don the title of ‘Noble Pokémon,’ in Legends: Arceus, which we think is pretty deserving.

If we’re being honest, we all took one look at the two forms of Lycanroc that were revealed before the release of Pokémon Sun and Moon and knew which one we wanted to get immediately—or was that just us?

Lycanroc: Midnight Form is immediately more appealing than its Midday counterpart, sporting deadly red, glowing eyes and a haunting bipedal stance akin to a werewolf. It looks like it’s out for blood, and that’s the Pokémon you’d want on your team to get results.

Lycanroc: Dusk Form was released with the advent of Pokémon Ultra Sun and Ultra Moon, but it still pales compared to our bloodthirsty little doggo.

Look, it doesn’t take a rocket scientist to analyze Tyranitar and let you know that it’s one of the best Rock-type Pokémon in the franchise. It looks menacing and badass, and it is super strong within the main series games as well.

Moreover, it is one of only two available Pokémon that possess the ability Sand Stream in the main series games, letting Tyranitar be the centerpiece for an entire team archetype. Its incredible base stats let it survive even the strongest of super-effective hits, and its Mega Evolution boosts its battling prowess even further. Try and stop this monster if you can.

While every Ultra Beast known so far is epic in their own ways, Nihilego is on a different level, especially since its presence is so enmeshed in the games and anime.

Nihilego is said to be a parasite of some sort and attaches its bulb-like top to the heads of various living organisms, such as humans and Pokémon. Once it is attached, it spreads a neurotoxin in the host’s body that alters the host’s thoughts and actions, just like what happened with Lusamine in the Generation Seven games and the anime.

It does this out of survival rather than malice and evil intent. Nevertheless, it’s super creepy and leaves us with more questions than answers. One burning question that is on the top of our minds, however: where does its Rock typing come from? It’s literally said to be a parasitic jellyfish. Never mind, it’s an Ultra Beast, so let’s just roll with it.

If you’ve ever played through the original Generation Three games, especially Pokémon Emerald, you will know the hoops you have to jump through to even lay your eyes on the Regi trio. Regirock’s puzzle is arguably the toughest of the three.

Making your way through various dive spots, digging areas, performing random movement sequences, and having a particular set of Pokémon in your party in a highly specific order were only some of the tasks you had to complete to encounter Regirock. Furthermore, these instructions weren’t even plainly provided to you. Instead, you would come across these instructions in random inscriptions written in Braille.

And if you didn’t know the non-verbal language, then good luck to you because answers and walkthroughs were not as readily available on the internet back then as they are today. But that is exactly what made reaching Regirock and battling it satisfying. And the music, ah. The proverbial cherry on top.

Even if you didn’t play the games, there are chances you’ve come across Regirock in the anime, especially the various clips over the internet, simply because of how popular the Regi trio’s outrageous cries have gotten. Regirock’s, in particular, is hilarious, and if you haven’t heard it yet, there’s no time like the present.

Finally, Regirock is the only Legendary Pokémon to don the pure Rock typing, pushing it onto the pedestal of the number one spot on our list for the best Rock-type Pokémon of all time.