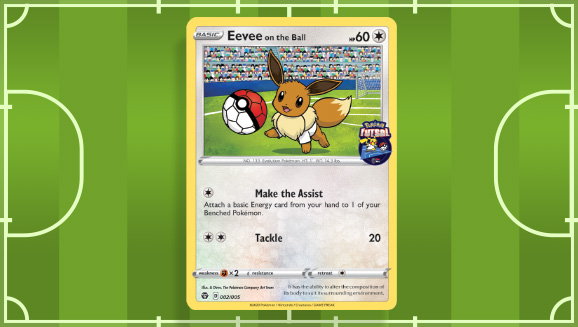 Trainers can now see their love for Pokémon and Futsal together in an Eevee England promo card being distributed in GAME stores in the U.K. starting tomorrow, Sept. 11.

It’s a limited-edition futsal-themed card that will be distributed for fans who buy at least £15 worth of Pokémon TCG purchases at GAME stores. The Eevee on the Ball card also has a special Pokémon Futsal stamp.

The art puts Eevee on a field with a Pokéball-styled futsal ball. Aside from Tackle, it carries the “Make the Assist” move, which allows players to attach a basic Energy card from their hand to one of their Benched Pokémon.

This card is a part of a partnership between The Pokémon Company International and the Football Association settled in September 2019 for a three-year contract to help increase futsal participation.

The Pokémon brand will be involved in futsal initiatives in England and the National Youth Futsal program. Schools and club tenants can register for the FA Pokémon Youth Futsal Programme and have a chance to receive an exclusive Pokémon bundle pack.

The bundle include items such as Futsal balls, Pokémon bibs, flat disc markers, and Pokémon progress cards where you can track your futsal skills.