The Pokémon MEZASTAR arcade game will launch on Sept. 17 in Japan. This product is a twin cabinet with giant screens that allow for a co-op Pokémon battle in arcade-style.

It offers three-vs-three battles, but the reward is in the collectible tags that it dispenses. Each cabinet has three lanes to slot tags, which you use for battle and you’ll have a chance of capturing that Pokémon.

The battles are simple for the most part and require actions such as timing roulettes and button-mashing. 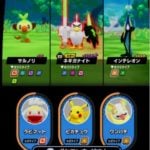 The game will feature “Star Pokemon” from the very start of service. These are extra rare and powerful Pokemon that includes Legendaries and Mythical Pokemon in the lineup.

This is a combination of the Gaole arcade machines that already exist in Japan. Arcade culture is strong in the country, and Pokémon found a way of being part of that.