Mega Evolutions are officially being added to Pokémon Go on Aug. 27, Niantic announced today. Trainers will be able to find four Mega Evolutions during Mega Raids and a Special Research.

Battling in Mega Raids will grant players Mega Energy, which can be used to trigger the Mega Evolution of that Pokémon. Mega Energy will work similarly to Candy—each Pokémon has its own type of Mega Energy and it only works for that specific Pokémon.

The first four Mega Evolution Pokémon being added are Mega Venusaur, Mega Blastoise, Mega Charizard X, and Mega Beedrill. Three of them are Kanto starters, while Beedrill will be the Pokémon used to introduce the new feature via a Special Research. 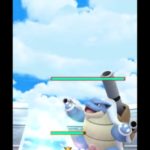 Beedrill was probably chosen to be one of the first Mega Evolutions because it’s an easy-to-find Pokémon, so every player can experiment with Mega Evolutions even if they just started playing.

Mega Evolutions won’t last forever, though. They’ll only last a few hours and trainers will need Mega Energy to maintain the Mega Evolution, which will increase the Pokémon’s power.

The attack power of all other Pokémon when battling in raids will also be increased, which will be useful to complete against high-leveled raid bosses with a low number of players. Pokémon with the same type as the Mega Evolved Pokémon will receive an even greater attack boost.

Trainers can use the Mega Evolved Pokémon to battle in raids, defeat gyms, battle against Team Go Rocket, play with friends, and walk around with them as their buddy Pokémon. They won’t be able to be left to defend gyms, however, and players won’t be able to use them in Go League battles as well.

September will be filled with Mega Evolution-themed events. Sept. 1 to 7 will involve battling in Mega Raids, while Sept. 11 to 17 will give players the task of competing in gym, trainer, and Team Rocket battles. Finally, Sept. 22 to 28 will feature buddy tasks.

In total, there are 48 Mega Pokémon in the video game series. Niantic is only adding these four to avoid overtaking the world map with an absurd number of new raids. Niantic will release new Mega Evolutions in the future periodically.

When legendary Pokémon get their Mega Evolution version in Pokémon Go, Niantic says players will notice their CP will be “astronomical,” so they want to start simple and give all players a chance to get on the board.