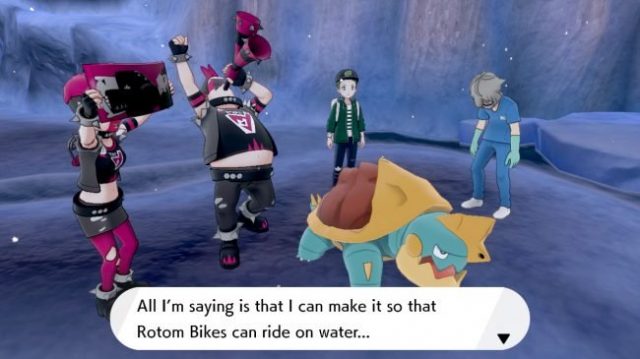 Crossing large bodies of water in Pokémon games are essential not just to progress the story, but to catch all kinds of different Water-type. Pokémon and Sword and Shield is no different.

While there is a way to swim across open bodies of water, similar to the old HM Surf from previous games, it does take quite a while to unlock. Even then, it isn’t really that useful.

After beating the sixth gym and heading south to Route 9, you will be confronted by some Team Yell grunts that are holding up the same man that gave you the Rotom Bike on Route 5. After beating them, the man will talk to you again.

He will explain how he has an upgrade for your bike and after a few alterations, you will be able to use the Rotom Bike to Surf and “swim” on the water, allowing you traverse more through the route and catch Water-type Pokémon on the water’s surface that you have been seeing in your journey across the Galar region.

It’ll take a while to get the upgraded Rotom Bike, but it’ll open up a bunch of new unexplored areas you have passed up until now and will let you freely explore more of the region.