The final Pokémon Sun and Moon set for the Pokémon TCG is called Cosmic Eclipse. It’ll introduce over 200 cards to the game when the current meta is sunsetted for the incoming Sword and Shield sets.

This is a combination set that will bring over every card from the Japanese Remix Bout subset box and Alter Genesis set releases.

The 12th Sun and Moon expansion will feature several new Tag Team cards, including a trio of starter combinations. All three fully-evolved Kanto starters are partnering up with various other starter Pokémon in the form of Venusaur & Snivy-GX, Braixen & Charizard-GX, Blastoise & Piplup-GX. 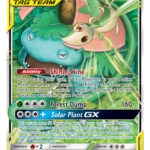 There’s also a fourth Tag Team card, Solgaleo & Lunala-GX, that will be coming over. 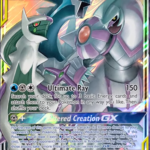 This set should feature around 230 cards in total, but that number hasn’t been confirmed yet. That total includes nine new Tag Team Pokémon-GX, seven new regular Pokémon-GX, the first Tag Team Supporter cards, 20 new regular Trainer cards, and a new type of energy.

One of the Tag Team Supporter cards will be based on the Red and Blue characters from the original Pokémon games and will carry effects similar to a Tag Team Pokémon’s GX attack.

Tag Team Supporter cards will have a regular effect and a stronger secondary effect if additional conditions are met at the time of activation. There will also probably be a hard limit for how many of these you can use per game, just like GX attacks.

An announcement about the first Sword and Shield series could come pretty soon after Cosmic Eclipse releases in the West on Nov. 1. And that could mean that Japan will have another new set before the end of the year.

Since this is the final set of the Pokémon Sun and Moon card series, this also means Cosmic Eclipse features the final Pokémon GX and Tag Team GX cards.

All of this information is based on what we’ve learned from retailers, trailers, and translations regarding the newest set. Any new information will be added as the Western release date approaches and updates come following the Japanese release on Sept. 6.