The Pokémon Company has revealed all 71 regular cards that will join the OCG as part of Dark Phantasma. These cards include previously revealed Pokémon, including Hisui Zoroark and Enamorous, among others. Both of these cards are available in V variants, but Hisui Zoroark is also one of the VSTAR cards that appear in the set. 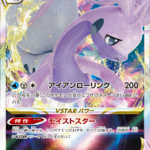 There are three VSTAR cards revealed so far in this set. These are Hisuian Zoroark, Hisuian Goodra and Magnezone. These cards also have their own V variants alongside Hisuian Voltorb, Gallade, and the previously mentioned Enamorous.

Along with these cards, there are also mutliple new radiant Pokémon joining the game. Revealed from the regular cards there is Steelix, Hisuian Sneasler, and Gardevoir. 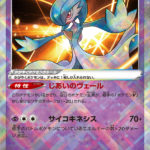 New trainers are making their debuts in this set. The characters taken from Pokémon Legends: Arceus include Iscan, Arezu, and Volo. You can check out all of these cards compiled by PokeBeach here.

Dark Phantasma is set to arrive in stores around Japan on May 13. The set will include further secret rare cards, however, they won’t be revealed until next week.

Those who want to get their hands on these cards in the West will need to wait until they join our August set Lost Origin. Some of these new cards will make up that set alongside others from Japan’s June release Lost Abyss.

For now, if you want to get these cards in the West you’ll need to order online. Those in Japan can purchase the new Pokemon cards in stores next Friday.