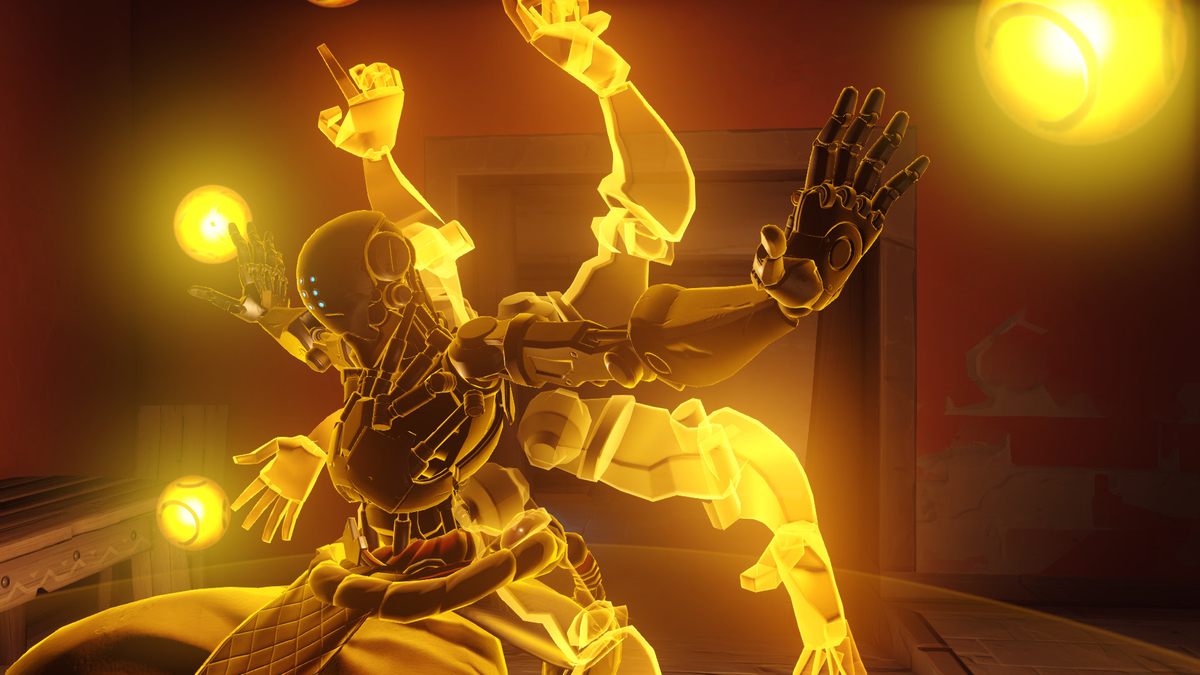 To transcend is to move past a normal state of being to a higher existence. Overwatch support Zenyatta is the embodiment of that idea, trawling the earth in search of spiritual enlightenment. He’s a master healer—a robot monk—with the ability to enter that heightened state using his ultimate ability, Transcendence.

On the surface, Transcendence is a simple ability. Zenyatta enters an invulnerable state where he’s unable to use his abilities or weapons, and becomes immune to damage. An ornate glowing orb surrounds him, healing all allies in a 10 meter radius. Using the ability correctly is the hard part. Use it too early and allies could be unprotected during an important moment—use it too late, and all allies could already be dead.

But there’s also an unconventional use—one that is hard to pull off correctly—that New York Excelsior support Bang “JJoNak” Sung-hyeon was able to during an Overwatch League series against Florida Mayhem. The two teams were not exactly evenly matched. NXYL is number one in the rankings, while Florida putzes around at the bottom. Maybe that was what allowed JJoNak to experiment with his Transcedence, but it was truly an enlightened moment for the South Korean support player.

Eichenwalde is the first map, a winding push through a crumbling German city. NYXL has stalled Florida before they’ve breached the castle gates. JJoNak is wedged in New York’s back line, doling out damage and healing—all while dodging rockets from Florida’s Pharah player. There are moments where it seems like JJoNak is unfavorably positioned inside an Eichenwalde nook, but he’s exactly where he needs to be.

There’s enough space for JJoNak to stay engaged with his team, but corners he can dip behind when he needs to stay safe. His positioning allows him to do way too much healing on his allies, making him a prime target for Florida. And that’s why Florida commits to an aggressive dive onto him, sending in their own Zenyatta player, a D.Va, and a Winston.

Florida’s Zenyatta player uses his own Transcendence as soon as the team enter’s JJoNak’s domain. In most scenarios, an aggressive dive onto the Eichenwalde cart would have warranted the Florida Transcendence. They would have normally been able to wipe out JJoNak and move on to the rest of the New York squad to push the payload closer to the next capture point.

But what JJoNak does is brilliant. He answers Florida’s Transcendence with his own, not only to keep himself alive, but to block the enemy team inside his nook. JJoNak expertly weaves his way through the knotted space and plants himself right at the doorway—it’s like a Mei wall without a Mei. He’s essentially trapped three of Florida’s players away from the cart, rendering the ultimate useless. There’s no way Florida was going to be able to move the cart at that point.

Transcendence ends and JJoNak is eventually knocked away from the door, but New York is lying in wait for Florida’s exit. The enemy team is not able to grab another point on Eichenwalde, thanks in part to JJoNak’s quick-thinking.

Body-blocking in Overwatch isn’t a new idea—it’s a skill that’s been used since the game’s beta. But it’s often a move seen from Overwatch’s tank players, like Winston or D.Va. Allied heroes can move past each other with ease, but enemies can’t do the same. The size of these heroes make them good choices for the body-block. We’ve seen body-blocking most often in professional Overwatch matches with tanks using their bodies to keep an out-of-mech D.Va from getting away. They don’t want to kill her and allow to respawn; instead, it’s more valuable to keep her alive and stagger respawns so that the enemy team has to wait for a full push.

New York’s win against Florida earned them a spot in the Overwatch League’s stage one title matches, placing them at the top of the rankings. They’ll take on London Spitfire on Feb. 10 before moving into those title matches. Florida Mayhem on the other hand have no chance at making the stage one finals, will return on Feb. 10 to play Philadelphia Fusion.