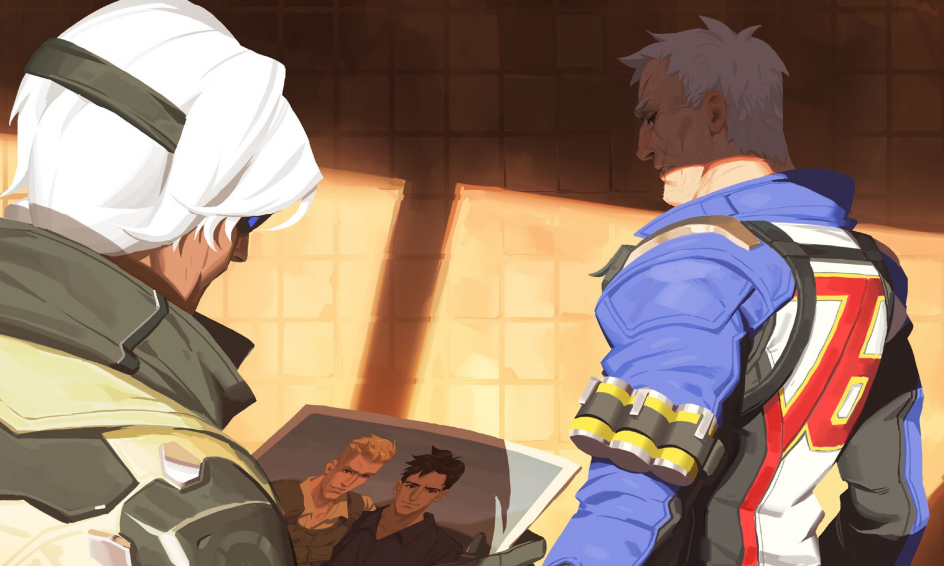 Blizzard introduced a new character in Overwatch’s lore as part of a short story, Bastet, in 2019. Though the majority of the story focused on the relationship between Ana and Soldier: 76, there’s another relationship explored—one between a younger Soldier: 76, then called Jack Morrison, and a man named Vincent.

Bastet confirms that Soldier: 76 is Overwatch’s second gay character. (Tracer is the first official queer character, announced a few years ago in an Overwatch digital comic.)

Here’s an excerpt from the story.

“Vincent… I haven’t thought about him in years,” Ana said. “Still keeping a candle lit for him?”

“You’ve never looked in on him? You must have been curious. All the surveillance power in the world. I bet Gabe would have put a Blackwatch agent on him if you asked,” Ana said.

Jack glared at her.

Jack laughed. “He got married. They’re very happy. I’m happy for him.”

Ana was unconvinced. In the early days, Jack talked about him often, floating a dream that the war would end quickly, and maybe he’d have a chance to return to a normal life.

But a normal life was never the reward for people like us.

“Vincent deserved a happier life than the one I could give him.” Jack sighed. “We both knew that I could never put anything above my duty. Everything I fought for was to protect people like him… That’s the sacrifice I made.”

“Relationships don’t work out so well for us, do they?” Ana said, unconsciously running her thumb over where her wedding ring used to be.

“At least you and Gabe managed to have families.” The pair lapsed back into silence.

In the story, Chu revealed that Vincent is now happily married, something he imagined he’d never be able to give his ex-boyfriend.

It’s not the first time we’ve seen Vincent in Overwatch’s lore—we just didn’t know who he was. In the Reflections comic, where Tracer was revealed as gay, Blizzard slipped in the same photo of Vincent and Soldier: 76. In Reflections, Ana and Soldier: 76 are seen together, with Soldier: 76 holding a blurred photo of two men. It’s the same exact image as in Bastet.

Though we don’t know a lot about Vincent—and perhaps never will—it’s clear that he was an important part of Soldier: 76’s life, a character whose backstory has been largely unexplored. We’ve long seen him in action but have never gotten a glimpse into his personal life.

Vincent, two years later, has still yet to be explored by the Overwatch writers. But with Overwatch 2 expected to launch next year with a cast of new characters, a surprise reappearance could be in the cards.