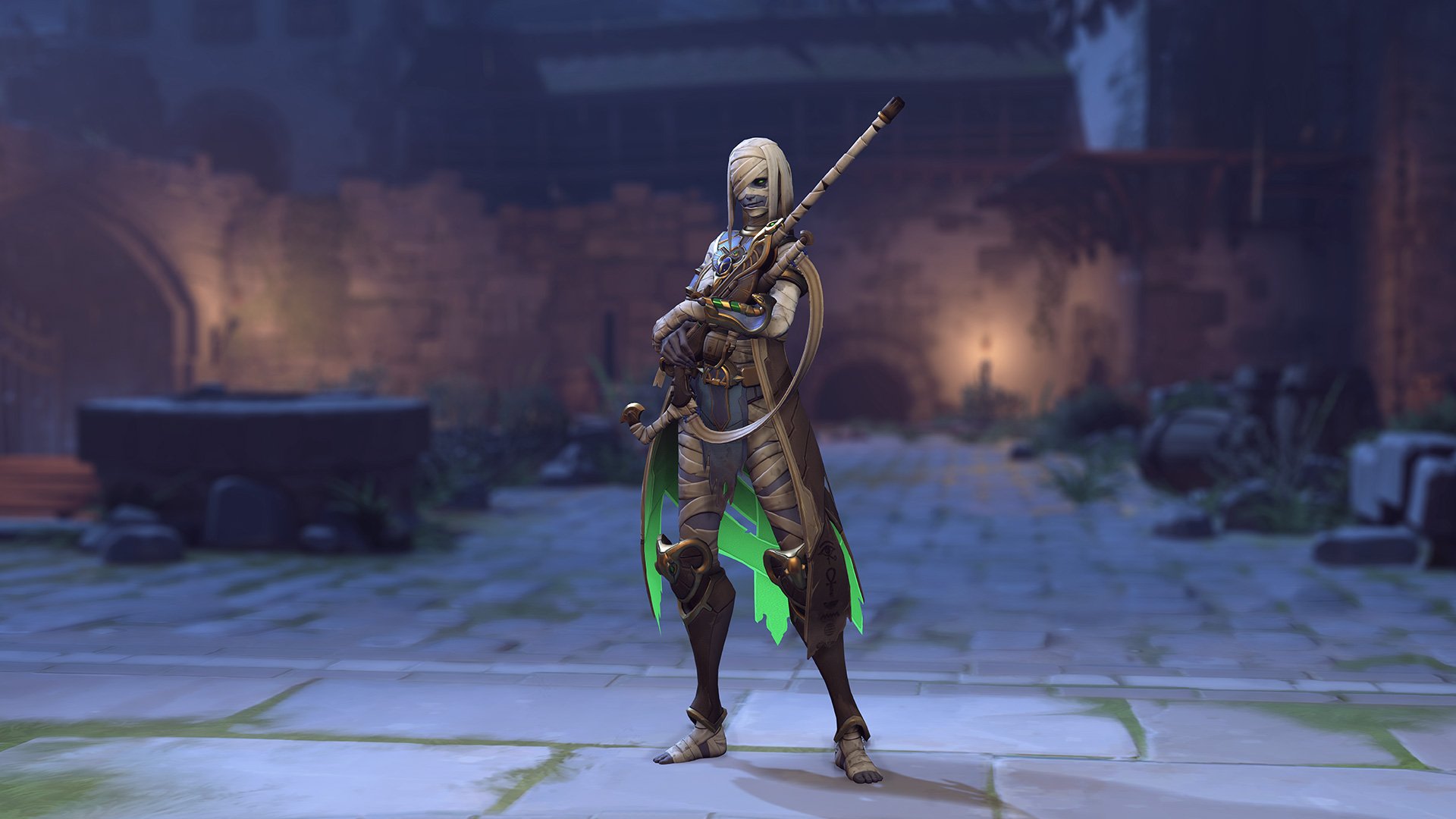 Overwatch’s skins function as a narrative tool; each character has their own set of core characteristics, motivations, and personalities, and their visuals should reflect them. Reaper’s shadowy theme is a reference to his inner conflict and thirst for revenge. Moira’s similarly dark design echos her ruthless pursuit of science—regardless of its ethical considerations. Lúcio, on the other hand, is a bubbly DJ from Rio de Janeiro, represented in a contagious shade of green, and Mercy’s armor bears the white color, traditionally associated with medical practice.

More often than not, event skins can be thematic aesthetics or whimsical jokes. But in some cases, they can refer to a specific moment in the character’s past. McCree, Moira and Genji’s Blackwatch skins reflect their time in Overwatch’s covert division. Reaper’s Soldier: 24 and Reyes skins show the human he was before changing his allegiances.

New cosmetics are a significant part of Overwatch’s traditional events. They can be purchased with credits or obtained through loot boxes. We’ve compiled a list of the best skins released this year—some because they’re meaningful or represent something, and others just because they look good.

Overwatch’s Lunar New Year alludes to popular characters in Chinese folklore and history. This year’s Lunar New Year was inspired by historic figures whose stories have been told for thousands of years, blending the mythical and the mundane to create legends with a near-folkloric quality.

Lü Bu was a Chinese warlord known for his prowess in battle and for changing alliances whenever it suited him. He was a skilled yet treacherous warrior—not unlike Overwatch’s Reaper.

“Lubu was known as the most skilled yet treacherous warrior in the Three Kingdoms lore, and so I felt Reaper was the perfect character to pair with him,” concept artist Qiu Fang said about the visual. The artist made sure to include two of Lü Bu’s trademark traits in the skin.

“The twin red feathers is an iconic part of the character,” Fang said, “but historical texts also mention that Lubu’s armor was themed after the ‘ni’, a lion-like beast from Chinese mythology,” Fang said. Both details made it into the final version of the skin.

The Archives event series is known for its lore-infused missions, which delve into Overwatch‘s major story points. The first installment of the event led players to the King’s Row Uprising, which took place years before the events of Overwatch. The event showcased younger versions of our heroes clad in their old Overwatch uniforms. And this year’s event gave Moira the same treatment.

The Scientist skin harks back to her past as a woman of science, who placed scientific progress over human risk in her research. Her controversial methods got the attention of Gabriel Reyes, who would eventually become Reaper after Moira’s continuous experiments.

Notre Dame Cathedral is shrouded in an eerie, supernatural mystique. Its gargoyles are said to protect the cathedral, and the multiple stony faces atop the building add a somber solemnity to its architecture. The gargoyles were the source of inspiration for Blizzard concept artist David Kang when designing Winston’s Anniversary skin.

“I’ve always been fascinated with gargoyle statues on gothic cathedrals, and have been wanting to do a skin like this since early 2018,” he said. “The concept team thought it would a perfect match for Winston, as he looks a bit like a gargoyle himself from a silhouette point of view.”

The reasons why Winston is a good subject for a gargoyle don’t stop there, though.

“Gargoyles also have two different forms they can take—one as stone, and one as a living, breathing creature,” Kang said. “Winston is similar in that he has a calm, collected state, and a berserk Primal Rage state.”

The visual was released in May, approximately a month after the Notre Dame cathedral caught fire. It’s unclear if the skin was released as a homage to the church, or if its timely release date was just happenstance.

The only thing more toxic than your teammates is this year’s Roadhog Anniversary skin. It gives the off-tank a major visual overhaul; his head becomes a living hog skull dipped in a mysterious preservation fluid. Combined with Roadhog’s deep, guttural voice and hook-and-shoot combo, it’s scary enough to be a Halloween skin, but Blizzard gave us this terrifying gift a few months early.

The Overwatch League All-Star game pits the best of the best against each other and divides players in two divisions: Atlantic and Pacific. As a celebration of the Overwatch League’s talent, Blizzard releases yearly thematic skins. This year’s theme was night-and-day, and the two heroes lucky enough to receive skins were Lúcio and Mercy.

Lúcio’s peppy personality is perfectly suited to the day theme. The healer is dressed in a white armor with golden tribal tattoos on his arms. He carries a sun crest on his helmet, and his hair is dyed to an incandescent shade of yellow but changes to a bright green if you’re using the speed aura. The abundance of white combined with the skin’s heavy, supernatural glow makes Lúcio look like a deity.

Mercy’s Atlantic skin is contrasts Lúcio’s Pacific visual. It embodies the night theme with a color palette made up of cool colors like purple and dark blue. Like Lúcio, she carries a crescent moon emblem on her crown. Her wings were adapted to fit the color palette and to give her a more fairy-like appearance and bear the crescent moon. Finally, her Caduceus got an overhaul, and it looks more combat-ready than the normal version. Atlantic Mercy’s warrior princess undertones are a significant part of its appeal, and it brings out the Battle Mercy inside all of us.

You can’t talk about professional Zenyatta play without mentioning Bang “JJoNak” Sung-hyeon. The player is widely lauded as the most lethal Zenyatta in the world, and his efforts during the Overwatch League’s inaugural season granted him the League’s MVP Award. To celebrate his talent, Blizzard partnered up with the pro to design a customized skin specifically for him.

The result is Zen-Nakji, a skin which fuses JJonak’s love of maritime creatures and the New York Excelsior’s blue-and-red palette into a unique design.

In the new skin, Zenyatta’s head turns into an octopus inside a fish tank-like helmet, and his orbs are represented as glowing octopi. JJonak’s favorite color, pink, is used alongside the NYXL’s navy blue and bright red to define the color palette. It’s a celebration of JJonak’s talent, and it does the job well.

Halloween is the time of year for all things spooky, and Blizzard gave Ana the perfect gift. When using the “Pharaoh” skin, our grandmotherly heroine is turned into a terrifying mummy.

The visual adds a lot of golden detail to Ana’s visual and weapons. Her sleep dart launcher and biotic rifle are shaped by King Cobras, and she has the emblem of a scarab on her chest. The skin gets extra points for alluding to Ana’s Egyptian nationality. For players who love to match skins, this one makes a good mother-and-daughter combination with Pharah’s ASP visual.

Our favorite Brazilian DJ got a terrifying look this Halloween. His Gorgon skin is a perfect cross breed between musical and Medusa. His hair, which was always one of his defining features, was turned into living snakes with piercing green eyes. Surprisingly, this skin isn’t a legendary, it’s just an epic. Snag it for 250 credits at next year’s Halloween Terror event—it’s definitely worth it.

Doomfist is one of Overwatch’s most controversial characters. Some of the artists behind his design called him “a love letter to the fighting game genre” and said that his concept was meant to evoke “that old fighting game, side-view, brawler feel.” To achieve that, Doomfist is armed with a powerful gauntlet and a wide variety of crowd control moves, like stuns and uppercuts.

Doomfist’s Winter Wonderland gives the hero a Viking look. His trademark gauntlet gets an icy palette, and the body paint from his base skin is replaced with Nordic tattoos. The hero also got a white beard, the first time the hero sported facial hair. Finally, he dons a horned helmet that evokes imagery of The Elder Scrolls V: Skyrim’s hero, the Dragonborn. If the sight of a regular Doomfist charging a Rocket Punch is already terrifying enough, then a Viking Doomfist makes it a thousand times worse.