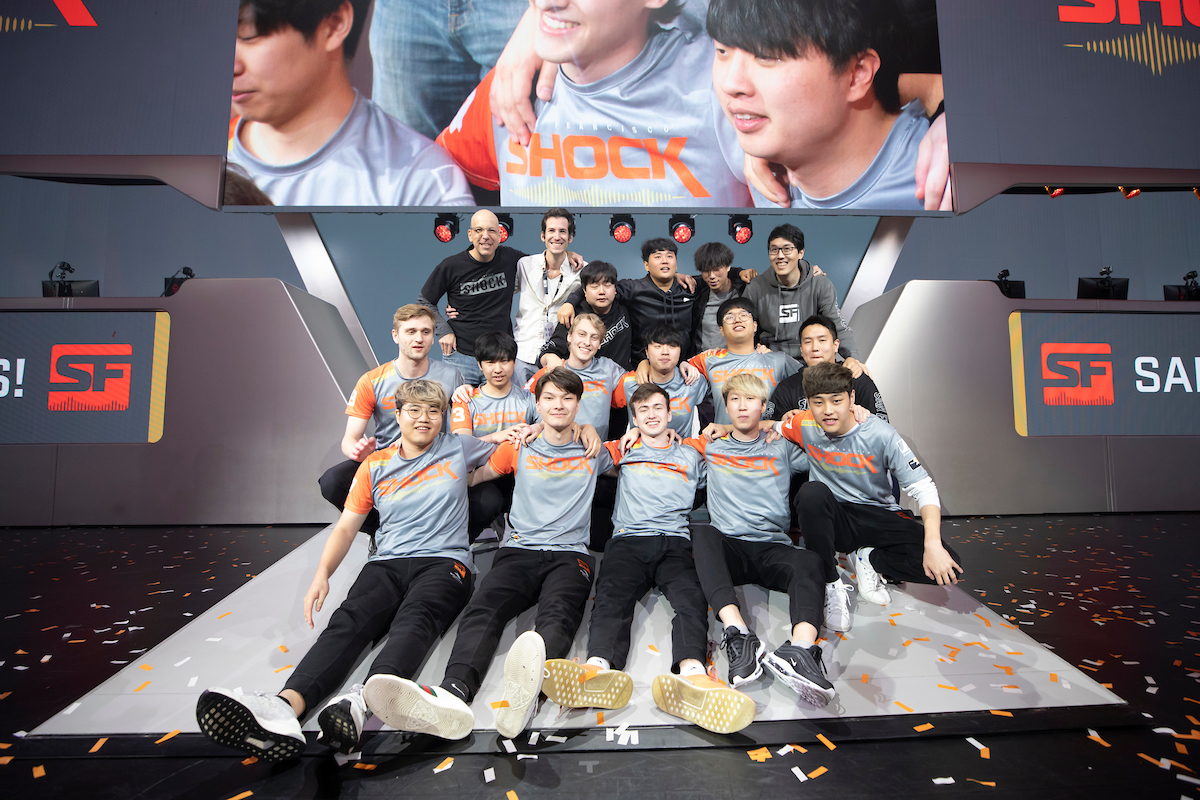 In a downpour of orange and yellow confetti, players on the San Francisco Shock hugged and cried yesterday. They’d just won the Overwatch League stage two championship against the Vancouver Titans, bringing home $200,000 in prize money.

But for the team, winning a stage championship rematch against their rivals and ending the Titans’ season-long winning streak was just as important as the money.

“That’s the main reason why beating them feels like we’re the best team now,” said Shock main support Grant “Moth” Espe during the post-match press conference. “They’ve been the best team for so long.”

Even though San Francisco completed the league’s first “golden stage” by not losing a single map throughout stage two, many fans and analysts still saw them as second fiddle to the Vancouver Titans.

In the stage one grand finals, the Titans beat the Shock 4-3 in an insanely-close match. Multiple maps during that series arguably could have been won by the Shock if they had the focus or sustainable energy that the Titans had. The Vancouver Titans, fresh off winning Contenders Korea as RunAway in an eight-map series, were used to long haul championship matches.

This time around, the Shock were prepared to sustain their aggressive play as long as they needed to.

“After map five it was the same map score we had against the Titans [in the season one finals], 3-2 in favor of us,” said main tank Matthew “Super” DeLisi. “Last time I think we kind of took our foot off the gas. Half the things I said [to the team] after the fifth map were ‘don’t let up’ and ‘the same thing happened last time.’”

Their focus paid off. The sixth and final map of the series took both teams to Blizzard World, where the Shock seemed to be invigorated with energy. Super and his teammate Jay “Sinatraa” Won worked together to wipe out the entirety of the Titans on one play. While Vancouver still kept up their immaculate play, the Shock found cracks in the armor thanks to their previous defeat.

The Titans’ main tank, Park “Bumper” Sang-beom, is known for his aggressive Reinhardt play that’s backed up by the rest of the team. Most teams can’t stand up to the power his hammer puts out. But the San Francisco Shock knew better this time around.

“We kind of let him do whatever he wanted to in the first stage finals,” Super said. “But this time we…” he was cut off by Sinatraa, who said that “we punished him.” Super agreed. “He was getting farmed,” Sinatraa said, indicating that Bumper’s aggression had been a focus of their play.

Moth explained the focus on their own playstyle in a less blunt way. “Last time, in the later maps, the Titans were the ones who made the late-game adjustments to change their playstyle,” Moth said. The team agreed that this time, the Titans had to change to accommodate the Shock’s strategies, which led to their eventual defeat.

While the Shock are feeling like the king slayers of the Overwatch League, they understand that the Titans may come back with a vengeance in the same way they did. Shock DPS Kim”Rascal” Dong-jun is looking toward the future for his team. “Holding the championship is harder [than winning it],” Rascal said. “So we need to work harder than before.”