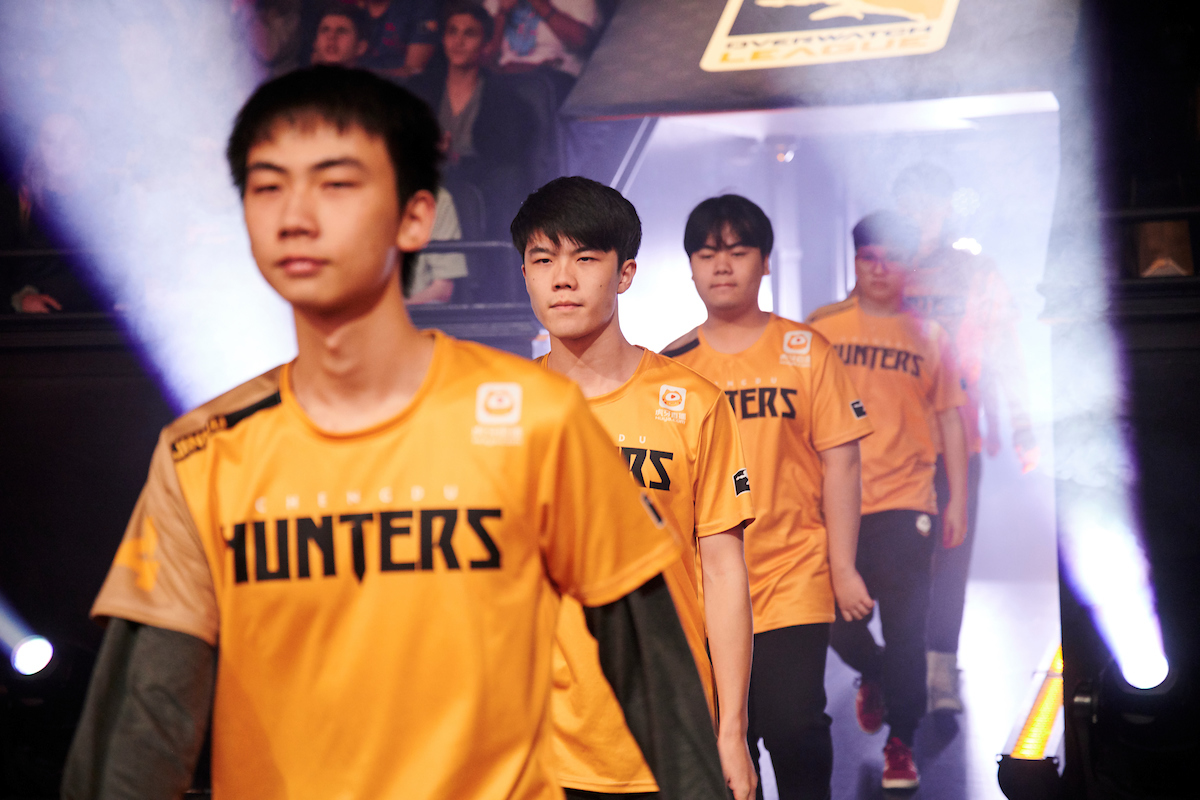 After a harrowing start to the year, the Chengdu Hunters are finally ready to make their Overwatch League debut.

Thanks to multiple cancellations of homestands and matches due to the coronavirus pandemic, Chengdu and the four other Asia-based Overwatch League teams have missed out on the start of the season. But now, the Hunters are ready to show what they’re made of due to a move to online tournament play.

The Chengdu Hunters found success in the first part of the 2019 season by refusing to bend to the rules of meta or the most optimal team composition. While their insistence on comfort hero picks paid off, by the end of the season, most teams were wise to their shenanigans. The Hunters came in 12th place in 2019 and are hoping to raise their stocks in 2020.

Don’t worry, Chengdu fans: the Wrecking Ball expert is still in the building. Ding “Ameng” Menghan returns to the team after terrorizing enemies with his Hammond expertise throughout 2019. He’s joined by new addition Chen “ATing” Shao-Hua, formerly of Contenders China team LGE.Huya. ATing also played tank for two years as a part of Team Taiwan in the Overwatch World Cup, meaning he likely has the range to make up for Ameng’s narrow specialization.

After an impressive showing at the 2019 Overwatch World Cup as a part of Team China, off-tank Luo “Elsa” Wenjie returns for more domination in 2020. Thanks to Hero Pools, Elsa is more likely to show off his considerable range in the off-tank position. Substitute off-tank Ma “Lateyoung” Tianbin also returns to the Hunters this year.

The Hunters have made the most changes to their roster in the support lineup. Flex support Kong “Kyo” Chunting and main support Li “Yveltal” Xianyao will come back to the Overwatch League stage in 2020 after impressing fans and analysts with their cohesion last year.

They’ll be joined by flex support He “Molly” Chengzhi and main support Chen “Lengsa” Jingyi, both former players for LGE.Huya. Of the two, Molly is most often cited by regional analysts as one of the most promising talents coming out of China.

While Chengdu has often been known for its tank line, the DPS squad has made the most difference. High-flying projectile DPS Yi “Jinmu” Hu returns for another year on the Hunters alongside veteran player Lo “Baconjack” Tzu-heng. With Hero Pools, Jinmu will have more chances to show off his considerable knowledge of numerous heroes.

Young DPS prodigy Huang “Leave” Xin, who played for Team China the past three years of the Overwatch World Cup, is finally old enough to play in the Overwatch League. The Chengdu Hunters have had Leave waiting in the wings since mid-2019, calling early dibs on a talented hitscan player. His expertise is likely to make Chengdu’s DPS lineup more terrifying than usual.

In 2019, the Chengdu Hunters found a moderate amount of success by playing their own game at all times. While other teams stayed grounded during the triple support, triple tank meta, Jinmu and the Chengdu Hunters hit the sky with Pharah. Ameng and his Wrecking Ball disrupted enemy frontlines and brought some chaos to the league. Those same options exist this year with bonus additions like Leave and ATing to round out the squad.

This year, everyone is playing the Hunters’ game thanks to Hero Pools. With deep hero knowledge and wild picks expected from every team, it’ll be up to every player on Chengdu’s squad to prove why they were the originators of strategic chaos. Leave and Jinmu should be able to stand up to the best of the league’s DPS squads, but the Hunters’ tank line may have some catching up to do.

The Chengdu Hunters begin their Overwatch League season on March 28 at 7am CT with an online game against the Hangzhou Spark.