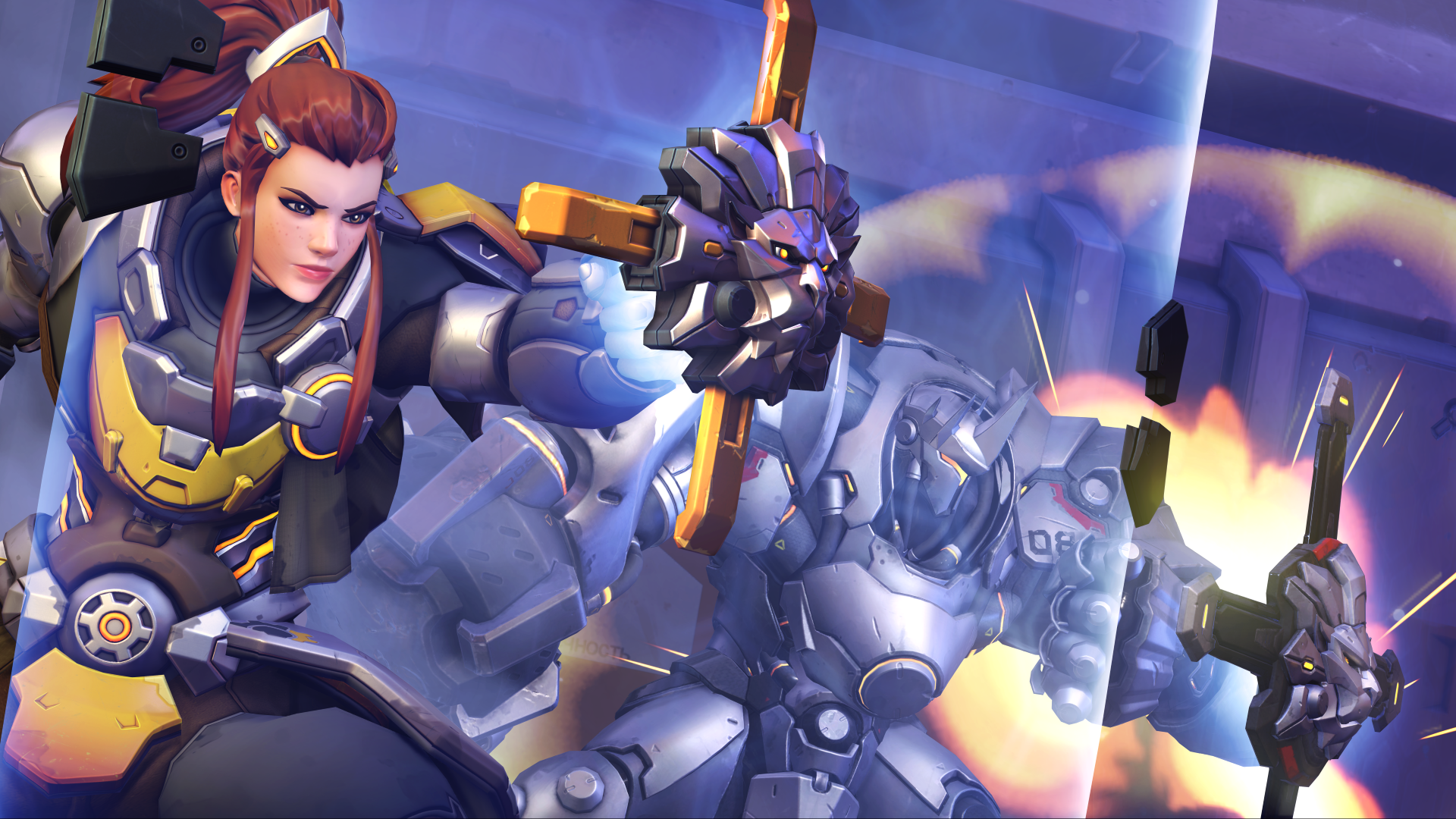 Out of all the Overwatch matches I’ve ever played, there’s one match in particular that stands out. I was playing as Brigitte on Watchpoint: Gibraltar, and we were on Attack. Per usual, I was playing Quick Play—one season with Competitive’s intense playerbase was more than enough for me to never touch the mode again.

But there was something totally different about my round on Gibraltar. Our team’s Mercy communicated with us from the very start, and she kept a constant line of dialogue going. Serving as our de facto leader, she told us where she was headed, who she was healing, and called out whether we should push the payload or pull back. Our team played so seamlessly that we constantly recovered from rough team fights, easily blowing away our opponents and winning the game.

Across well over 150 hours on both PC and PlayStation 4, I had never experienced anything like that in Quick Play before. It blew my mind that a bunch of strangers could actually work together without a ladder dangling over their heads. After I recognized our Mercy with the rarest of praise, “Shot Caller,” I realized that her leadership style was different than the usual communication I heard over Quick Play’s voice channel. Perhaps she felt motivated to take initiative in leading us thanks to Blizzard’s latest quality-of-life addition, Endorsements.

It’s been just over a month since Blizzard unveiled Overwatch’s Endorsement system, letting players honor one another for showing sportsmanship, leadership, or solid teamwork on the battlefield. The Endorsement system was primarily designed to fight a major problem plaguing Overwatch’s matches: Its players are unbelievably toxic, something that led game director Jeff Kaplan to speak out against the problem after over 480,000 accounts faced punishments for inappropriate behavior.

While Kaplan has long stressed that there isn’t a magic fix to make Overwatch players nicer, Endorsements may be a good start. Abusive chat in competitive games dropped by 26.4 percent across American servers in just two weeks after the feature was introduced, Kaplan revealed, and daily abusive players jumped down by 28.8 percent in the Americas. Call it “fake nice,” or maybe just “sportsmanship,” but either way, Overwatch’s culture is changing.

This shift is definitely for the best. Kotaku senior reporter Cecilia D’Anastasio argues that hostile behavior from teammates only weakens a team’s performance as a whole by unnerving players, throwing their focus off in an otherwise incredibly demanding video game. In her case, she eventually stopped playing Overwatch altogether after facing targeted harassment for her gender by men.

“Personally, I have performed worse in competitive Overwatch games after somebody has made comments about my gender,” D’Anastasio told me in an interview. “That used to happen pretty often, since I main off tank, which goes against the ‘women only play support’ stereotype. It tilts me and I think about what they said and how mad I am instead of concentrating on coordinating plays.”

I’ve seen it first-hand myself in other games. When I became a born-again PC gamer in 2017, I played a lot of Counter-Strike: Global Offensive and Rising Storm 2: Vietnam, two hardcore first-person shooters that rely on constant, ongoing communication for teams to win matches. But whenever I hopped on my mic to try to coordinate with my teammates, they would start making fun of my voice, which can sound slightly androgynous and nasally over a microphone.

Once in Rising Storm 2, a player said “you have the most emasculate voice I’ve ever heard” while I was coordinating an attack on an objective. Another time in Counter-Strike, someone turned on their mic and asked “why do you sound like a tranny?” while I was talking to other players. In both cases, I tensed up inside and stopped talking, embarrassed for being clocked as a trans woman.

Chalk it up to social anxiety, insecurity, or just being singled out, but incident after incident stuck with me and prevented me from communicating with other players during a match. And for a competitive multiplayer game that relies so heavily on communication, I felt like even pressing the push-to-talk button in Overwatch was a losing battle from the start. As it turns out, other women felt the same way.

“A year ago, I quit playing Overwatch for a long time after experiencing a particularly bad string of in-game harassment,” D’Anastasio explained to me. “That was very painful because I play Overwatch every day, have a lot of in-game and IRL friends who play and, most importantly, cover it for my job. But I couldn’t do it anymore.”

Then Endorsements arrived, and that changed the entire game for both D’Anastasio and myself. The system came with an incentive for players to not just be nice, but to recognize good conduct in one another. Suddenly, I was getting “Good Teammate” Endorsements while playing as my mains and “Sportsmanlike” for cheering on my friends and foes. And even a few times, I received “Shot Caller,” particularly when I tried to bring my team together for pushes as Moira or Brigitte.

When Endorsements dropped, receiving those accolades made me feel more like a useful teammate. Players started acting nice toward each other, too, and helping one another over mic. The bad apples felt more like exceptions than the expectation. If my teammates thought I was good at the game and were rewarding me for helping them play, then why not turn the mic back on?

Case in point, D’Anastasio later returned to Overwatch after quitting. She now hails the Endorsement system as a major change for the better, and says the game is “toning down the hierarchy of skill and introducing a hierarchy of decency.”

“It’s basically gamifying being decent,” D’Anastasio told me. “It’s good because now, players who are good to play with have badges saying as much. And because players can’t endorse friends, it seems like a pretty accurate measure.”

Figuring out the flaws

But while some players are having a largely positive experience with Endorsements, others argue that making the Overwatch community a better place still has a long way to go. Overwatch Wire contributor and Overbuff content creator Sabriel Mastin thinks Endorsements have helped in some ways, but she ultimately finds herself reporting players frequently for racist comments.

“A system is only as good as the community feels it’s being effective,” Mastin told me in an interview. “Right now there isn’t much reward for being good other than having a higher number next to your name. Short term here, it’s only been a month, that seems to be enough for a lot of folks, but long term, who knows if the community will care without a periodic reward.”

Other players aren’t even seeing the benefits at all. Lenore Sterner plays Overwatch on PlayStation 4 as a Mercy main, and sexual harassment is so pervasive on PS4 that she compares playing the game in solo queue to “being at the bar.” It isn’t just adults that are incredibly toxic, either. As it turns out, young kids are too. In an interview, she told me that she hasn’t seen Endorsements fix anything, in part because many of the players she sees on Overwatch are in grade school.

“We’re talking 10- to 13-year-olds who get on and start calling everyone ‘fags’ and ‘cock suckers’ and referring to me (usually the only girl) as ‘bitch,'” Sterner told me. “The whole calling people ‘fag’ or ‘gay’ or telling someone to kill themselves is just next level, especially since it’s coming from KIDS.”

“I’m not sure how Blizzard could implement policies, but the amount of under-13-year-olds can get pretty ridiculous and my concern is more for predators getting access to these kids than anything else,” she said. “I think it’s a culture issue more than anything else, but I’m not sure how to avoid that when there’s literally millions of players across so many servers.”

In the end, between D’Anastasio, Mastin, and Sterner, all three women had totally different perspectives on Overwatch’s Endorsements, from 100 percent approval to muted indifference. But each one agreed on one key point: Hostility in-game, especially toward women, isn’t inherently Blizzard’s fault. It’s a larger issue throughout the gaming community.

“I don’t believe there’s anything specific to Overwatch’s design that makes it more toxic than other online competitive games,” D’Anastasio explained to me. “I do believe that, earlier into its life, Overwatch didn’t do enough to curb toxic behavior, like many online competitive games. The reporting system wasn’t sufficient. Players didn’t know when action was taken and couldn’t be specific enough about why someone’s behavior was bad. Now, I feel that’s completely changed, especially with Overwatch’s latest update. Toxicity seems to be way, way down.”

Overwatch inherited the sins of other competitive first-person shooters, and there’s only so much Blizzard can do against a larger cultural problem. But even if Endorsements aren’t a one-size-fits-all solution to toxic behavior, they seem to be moving in the right direction. Between D’Anastasio, Mastin, and myself, we’ve each noticed the Overwatch community on PC has become a little friendlier. Or at the very least, it’s less misogynistic.

“Since the Endorsement system went up, I haven’t had anyone ask for sexual favors, repeatedly scream, ‘ARE YOU A GIRL? ARE YOU A GIRL?,’ or ask if I was a 13-year-old-boy,” Mastin said to me. “Previously vocal harassment for me was roughly once a month.”

There’s still room for improvement, of course. Mastin recommends a guild system, citing how her positive experience on the GirlGamers and Death Blossoms Discords for women and other marginalized gender identities are excellent at “engendering positivity.” The latter even holds classes to help players learn more about the game, including tips from GrandMaster Pharah main Fareeha and Mercy streamer EeveeA_. Sterner, on the other hand, just wants Blizzard to admit that the game’s console version has its own set of problems.

Endorsements won’t fix everything. But they represent a dedicated, ongoing response to dealing with hostility in Overwatch. In the end, it’s impossible to make Overwatch a perfect world where no one ever loses their temper or says something awful. But Blizzard is trying its hardest to think about this problem in a way that’s completely out of the box. Flaws aside, it’s working so far, and clearly encouraging a new way to play.

“Kaplan spoke in the past about having a positive mental attitude, and while many parts of the community laughed at the notion, including many pros or semipros unfortunately, he was right,” Mastin said.