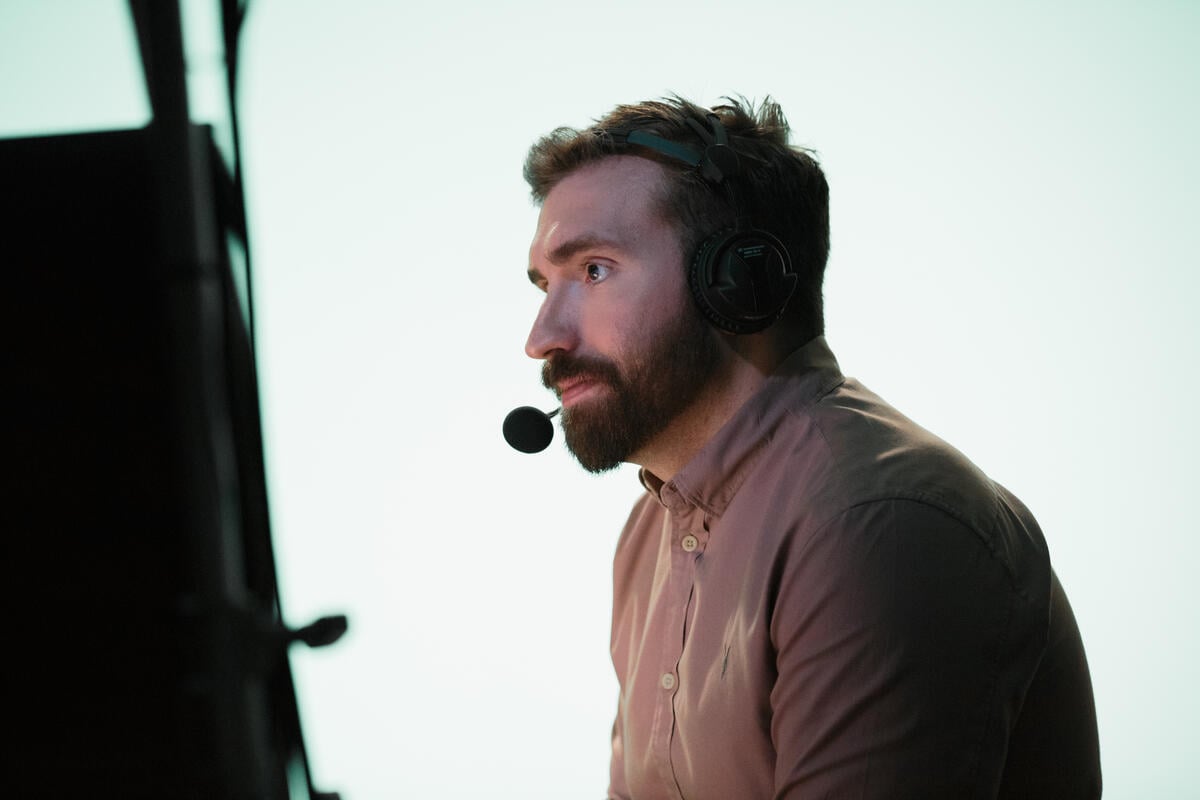 Overwatch League fans came back to life on Feb. 15 with news that the league’s fifth season will kick off on May 5. Though it wasn’t the anticipated April start date fans were hoping for, getting a full opening week schedule and hints of live events returning was more than enough to sate their appetite for content.

With the league shifting to an early build of Overwatch 2 and a five-vs-five competitive model, many complex pieces have to be put into place to make sure the Overwatch League stays relevant, competitive, and entertaining.

Sean Miller, head of the Overwatch League, is the new public face of the massive team working behind the scenes to get everything in order. Miller took over for former vice president Jon Spector in November since the latter moved to the Overwatch game department. He’s had the tough job of convincing often-cynical fans that hope is on the horizon.

Miller and Matt “Mr. X” Morello, a caster for the Overwatch League who does double duty as its senior manager of product and content, spoke with Dot Esports to give fans an inside look into the creation of season five and how their teams have built off of the successful foundation of 2021.

Sean, how has your transition to head of the league been?

Sean Miller: It’s been great, honestly. I can’t believe it’s been almost two and a half months now; it seems like it’s been a lot longer, probably because I’ve been around for a little while now. This is going to sound cliché, but the team at the league is a very strong team that had these ducks in a row, so when I got back, we were able to hit the ground running.

Matt, how has your job change gone?

Mr. X: I dabble in a little bit of everything. It’s fun, it keeps me on my toes. Last year when I joined Jon [Spector]’s team, with people like Sean on it as well, I had a great core to learn from. I know esports, but there’s a lot of stuff I don’t know. It’s super cool to be able to learn that from a lot of the smart people that we have here.

Now, I’m really just focusing down on the product and format and diving into things we haven’t explored. I’m from Call of Duty where we do these long events and [I think], why doesn’t Overwatch do long events? And it’s like, “hey, let’s try that out and bring it to this scene.” There are so many awesome things that esports fans all over the world in different titles get to experience; let’s pick the best of that and format it to what we do.

Mr. X: I really liked our format last year and I didn’t want to deviate far from that. I actually thought we got a lot of stuff right last year, we’re just trying to make events like the midseason and the playoffs feel even bigger. We’re eliminating a lot of the pain points that teams and even some fans had last year with strength of schedule issues and making sure everybody played each other the same amount of times. I think last year was a great launching point for what we have now.

Miller: I think that sometimes planning is just one eternal round at the Overwatch League. We’re always planning a season [laughs]. It’s a fairly complicated problem to solve. I remember back to 2020 when the pandemic hit and that was when we first started these ideas of, “what if we did a monthly tournament?” Ever since those crazy idea sessions with Jon and others in the room back in the day, we’ve really set a good foundation. It feels like we’ve got something right here now, with the format, and how we’re building up towards hype moments and hype tournaments.

Going into what we heard on Feb. 15, what led to the League Points changes? Besides certain teams suggesting it?

Mr. X: Thinking back on it last year, I actually kind of thought, “hey, I’m cool with it if you go to an event and lose, you lose.” Obviously, to teams that doesn’t feel the same. I’m not competing anymore, so I don’t have that much of a say in it [laughs].

It makes a lot of sense where their pain points were and we wanted to address that but not get to a point where, you know, a team wins a tournament, they get 10 League Points, there’s six games in a tournament and now you don’t have to do anything. We were trying to find a nice balance between having enough League Points in the system that make them meaningful and still reward teams for their qualification.

Because it is pretty hard to qualify for these tournaments. This year will be tough, but even last year, you had to qualify for a West Region tournament then play through that to make it to Hawaii. And to not earn a single League Point, that’s gotta sting. When you qualify for a tournament, it should be a great feeling. You shouldn’t go and lose and feel like you accomplished nothing. I think trying to solve that was our main hurdle there.

How did you decide to make the first and third tournaments regional only?

Miller: When we think about having a global league, having that global competition should really be the pinnacle and the most exciting, compelling part of a competition of any season. We want that to be as special as possible while also realizing there are logistical concerns with having teams from Asia travel here or teams from North America or Europe travel there. We thought we could really heighten the special feeling of the global tournaments by doing them twice.

That was also a reason behind having that Midseason Madness global tournament be such a massive celebration, because that’s really what it is. It’s the first time we’ve had a six-day event with a 12-team double-elimination bracket; it’s just huge. We want to make that as special as we can.

Mr. X: I love international competition as well, but after I see Dallas [Fuel] play Shanghai [Dragons] four or five times I’m like, “all right, do I really want to see the sixth time?” For me, I actually thought when we had the two regions really separate, it was an interesting story of which region is actually the stronger of the two.

Doing regional competition allows us to have more teams in those tournaments. If those are all international, you have to split that up. I’d rather see more teams get the opportunity to participate in tournaments rather than be eliminated because of the region they’re in if we have to split it up.

I think it’ll be really fun, though, once you get to that midseason and you have this week-long event. You haven’t seen the teams in each region match up with each other, and we get to see it. Which region will come out on top? And it’s a six-day grueling event. Whoever wins is going to be the best, there is not going to be a discussion of “oh man, maybe this team was better at that time.”

For opening week, there’s a set of Thursday games. Is that a normal thing or are we going back to the standard three-day weekend?

Miller: A piece of feedback we got last year that we wanted to solve for in the schedule was that teams having a bye week so consistently during the season wasn’t the best outcome. It worked for what we wanted to solve for in 2021, which was competitive integrity, in making sure that every team that had two matches one week was also playing teams that had two matches. It worked great from that perspective, but it didn’t work particularly well in keeping their fans engaged.

This year, the first week of every tournament cycle in the West [Region] will have a Thursday match day where teams will be playing additional matches that week as opposed to the other week. That’s simply to get the appropriate number of matches and also solve for the competitive integrity concerns we have throughout the entire tournament cycle.

Mr. X: It was a big feedback [point] last year that some teams had bye weeks during week one and they could watch other teams play and see what the meta was and whatnot, so that was one thing we wanted to eliminate. We wanted to eliminate [the chance] that teams could start off a tournament playing less than others or watch others play and have a bit of an upper hand. Those weeks will be Thursday to Sunday the first week of those seeding tournaments.

Could you explain the postseason play-ins a little bit more? There was some confusion about whether the Countdown Cup acts as the play-ins.

Mr. X: The Countdown Cup actually is the play-ins. Once the Cup is over, we go into postseason mode. In the West, [seeds] one through six will auto qualify for the playoffs in terms of League Points but then we’re actually going to have [seeds] seven through 10 play for two spots. I think we really want the best teams to be there at the end. Some teams will get acclimated faster than others throughout the season, some teams may want to sign different players throughout the year. I don’t want anybody’s performance at the beginning to put them so far behind that they don’t feel like they can make it at the end.

In the East, we’ll have [seeds] one through three guaranteed the spots, four will get a bye, and seed five will play six. In a way it includes even more teams in our postseason “bubble,” you could say. You’re obviously playing to get that guaranteed spot, but you can make a push in the second half of the year and realistically find yourself with a chance to get in. Players always want something to play for, right? I think giving them the opportunity and saying, “hey, starting off bad isn’t the end all be all,” is a good North Star for them to push for.

Miller: To add to that, the reason we effectively replaced the play-ins with Countdown Cup is that, for everybody at the end of the season, you just want to get into the playoffs. You’re there, you’re this close, so adding these additional circuits was kind of just prolonging what everybody wanted to see anyway. So we thought, you know what? Why don’t we just combine these things and get into the postseason sooner so we can get right back into the action.

What opening week match are you most excited about?

Mr. X: I think the new look NYXL will be interesting against the [Los Angeles] Gladiators. I’m also actually excited to see Atlanta [Reign] with their newly reconstructed roster. It’s just so interesting because there’s so many new teams and new variations. You look at the [San Francisco] Shock, they retooled in a massive way. I feel like every team has made such big moves this offseason.

Miller: There’s definitely a reason why the Gladiators and NYXL are playing each other on opening day and Matt touched on a lot of those. To me it’s the match of the returns, you know? You have NYXL returning back to the West and you have [Gladiators DPS] Patiphan which, you know, he’s kind of unreal and I’m very excited to see what he can do this year.

The other one I’m really excited about is Shanghai, the returning champs, playing Philadelphia [Fusion]. It’s always fun to see the return of a team full of what feels like MVPs do their thing again on this new format.